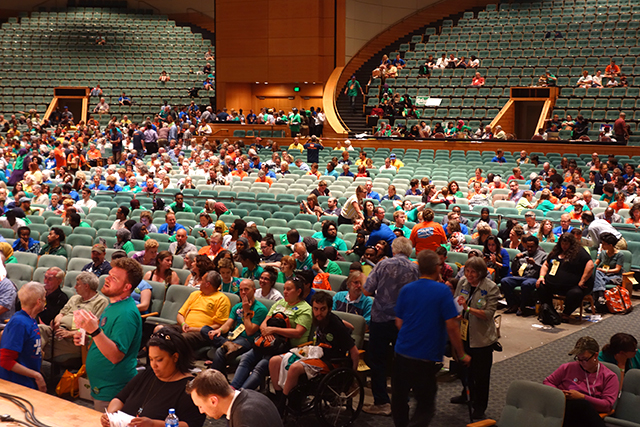 MinnPost photo by Peter Callaghan
Delegates, alternates and other attendees taking their seats at the start of the 2017 Minneapolis DFL convention.

It had been a long day.

When the balloting for mayor at the Minneapolis DFL convention finally took place last Saturday, July 8, it was around 7 p.m. The convention had started before 11 a.m.

Even then, it took another two hours before that first vote was counted and announced, results that were conclusively inconclusive. While it showed the relative strengths and weaknesses of the main four mayoral candidates, it also suggested that none had a chance of getting to the 60 percent margin required to secure the endorsement by party rules.

But that second ballot never took place. Less than two hours later, the convention was adjourned — not only without an endorsement for mayor, but without even another vote.

Why that happened was never much of a mystery — the top candidates had agreed to quit the race if another candidate was actually endorsed, which meant that most had little incentive to keep the process going. But how it happened has also become clear, thanks to a recording of the meeting where the decision was made that was recently provided to MinnPost — an account that offers a glimpse of the sort of unsexy intra-party political machinations that, nevertheless, most people aren’t privy to. (An audio clip of the meeting is available at the bottom of this article.)

While delegates mingled and talked and wandered around the Minneapolis Convention Center after the first vote, six people gathered elsewhere in the building to decide what would happen next. At the meeting were representatives from the Dehn, Frey, Hoch and Hodges campaigns, as well as convention co-chair Ann Friedrich and a parliamentarian, Jason Cassady.

After some remarks about how all four of those campaigns “want to end the process for mayoral endorsing,” each of the campaigns’ representatives is asked to offer their unique positions on that idea. “It’s the position of the Hoch campaign that we would like the convention to end, there being no possible way for the DFL as a party in its entirety to convey an endorsement on any individual candidate in the mayor’s race,” says Kieran McCarney, Hoch’s campaign manager.

Dehn’s campaign manager, Joelle Stangler, wasn’t so sure about that. “To be quite honest, we fully anticipated going to a second ballot,” she says. “I think there’s opportunity for movement. And we were not really prepared to take a stance, so I’m honestly here listening because I found out about this conversation because I saw three campaigns going to meet without me.”

“And then we reached out, we wanted to make sure everyone was included,” interjects Sydney Jordan, Frey’s political director. “We definitely didn’t even start any conversations.”

“I really do believe that, and I appreciate it. But I’m still sort of like thinking through what makes sense for our campaign,” Stangler says. “I think really the delegates should decide if we go home, not four politicos.”

Then Jim Niland of the Hodges campaign weighs in: “We would like the process for balloting on mayor to end,” he says. “We are fine with the central committee being forbidden from endorsing between now and the general election. We are fine with a constituency endorsement still remaining in place.” (Subgroups of the city party, such as the DFL Environmental Caucus, can endorse if the broader party does not.)

“That’s our position as well,” says Jordan, from Frey’s campaign. “We want to make sure all candidates retain their constituency endorsements and we also don’t want to bar any further constituency caucuses from endorsing.”

‘The point of this is to get out on time’

After some talk among the group, convention co-chair Ann Friedrich then outlines the process that would follow, an explanation that leads the campaigns to debate whether there should be one motion or two: one to direct the central committee and another to adjourn or a single motion containing both. Friedrich tells them any such motion would be debatable, with up to three speeches in favor and three against.

“So a motion to adjourn would be a main motion,” she says. “Unlike a privileged motion to adjourn, this one is debatable. People probably argue that, but it is. But it just requires a majority vote. It is theoretically amendable.”

When someone asks if the convention is still in recess, Friedrich says: “We’re gonna stay in recess until we figure this out.”

McCarney, from Hoch’s campaign, tries to clarify:  “And then once [the motion to adjourn is] passed, this body’s business with the mayors race would be done. And there would be no avenue for the Minneapolis DFL as a unique legal entity to convey an endorsement.”

When someone enters the room to check on the meeting, they’re told: “Tell them we’re figuring it out.”

Eventually, Hodges campaign rep, Niland, summarizes the deal: “I think the position of the Frey, Hoch and Hodges campaigns is we would make a motion to adjourn with direction to the central committee not to endorse before the second ballot is taken. That would be our position.”

Niland then asks Stangler for her thoughts. “I think that decision should be left up to the delegates,” she says. “I don’t feel comfortable with us four making it. But I anticipated this, and I’m like, ‘This is like how this game works.’ I appreciate you inviting me to this conversation. I understand there was no requirement to or need to.”

Stangler then wonders if the three candidates who would have been dropped by convention rules from that second ballot — Al Flowers, Aswar Rahman and Captain Jack Sparrow — would have chance to speak to the convention.

“I think the point of this is to get out on time, so let’s get out,” someone says before the meeting breaks up.