Minneapolis seems to be losing its battle with the Emerald Ash Borer.

The metallic-green bug that burrows beneath ash bark began its invasion in 2010 in the Prospect Park neighborhood, but soon began to spread west across most of the city. Now, studies of the pest’s progress and lethality suggest that all of Minneapolis’ ash trees will eventually be afflicted — and will need to be removed over the course of the next 15 years, according to an Ohio State University study cited in the annual report of the Minneapolis Tree Advisory Commission.

That mortality rate means the best response, according to the commission, is to remove the trees once they’re infested and replace them with different species of trees not susceptible to the bug. Of the 1 million trees in the city, 200,000 are varieties of ash. Of the 40,000 ash trees owned by the city and the Minneapolis Park & Recreation Board, 20,000 have already been removed, or will be by the end of this year.

Peggy Booth, co-chair of the tree advisory commission, complimented the park board and the city for moving aggressively to remove ash trees and replant, calling 2017 a “banner year.” The board staff has planted more than 10,000 trees this year alone, varieties that include Kentucky Coffeetree, Catalpa, Buckeye, River Birch, London Planetree, Bicolor Oak, Ginkgo, Ironwood, Alder and Corktree trees.

The park board has budgeted $3,570,686 for tree removals and $2,567,788 for plantings this year from both general fund and an eight-year levy meant to respond both to the Emerald Ash Borer losses and storm damage, said park board spokesperson Robin Smothers.

Booth cited the success in fending off Dutch Elm Disease, which hit the region in the 1960s and 1970s, as an example of how to respond to the latest infestation. Only 1,200 elms had to be removed in Minneapolis in 2016, and the city still has 25,000 elm trees left.

With the public agencies responding so aggressively, more and more of the problem will fall on private property owners, Booth said. “One of the wake-up calls for us now is that most of the ash are in private yards and the responsibility for removing those does fall to residents,” Booth said.

City ordinance requires the removal of infested trees at the owner’s expense. And failing to remove an infested tree triggers condemnation and removal by the park board staff — with the costs applied to the owner’s property tax assessments.

The advisory commission is recommending the city and park board put together a communications plan to let property owners know of their responsibility. Booth said owners need to first determine if their trees are ash trees, and then whether they are infested. Owners of affected ash trees have the option of removing them immediately, treating them to extend the life or setting aside money for eventual removal.

The advisory commission also made recommendations for preserving the trees the city already has by training groundskeeping staff to avoid harming the trees: not whipping the bark with weed trimmers or damaging roots during sidewalk and street repairs. The commission is also encouraging the undergrounding of utility wires to reduce conflict with branches and encouraging developers to find ways to keep mature trees during construction. 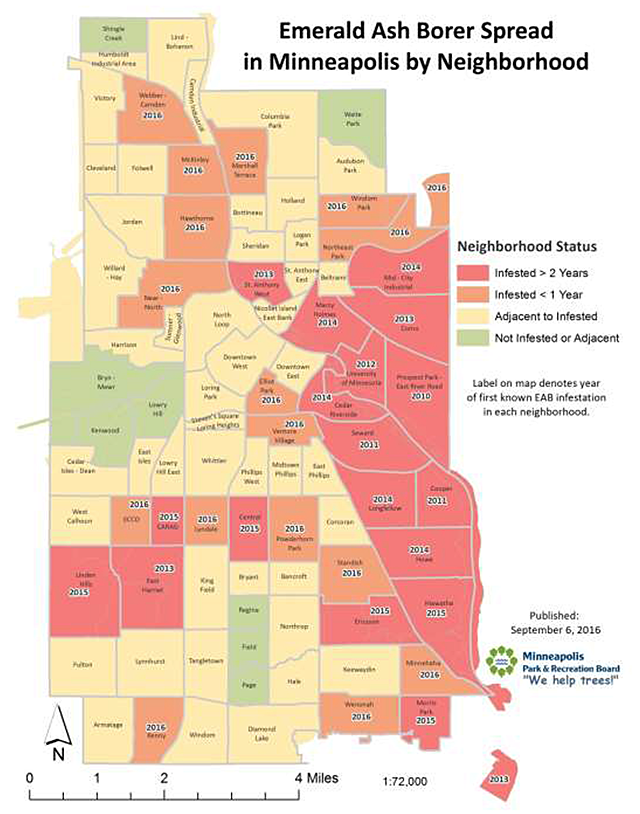 “It is our concern that in projects, protection of large, mature trees is sometimes an afterthought,” Booth said. If developers include preservation in their request for bids, it will be easier to plan for it than if it comes up once construction has started, she said.

Minneapolis City Council Member Cam Gordon, the chair of the council’s Health, Environment and Community Engagement Committee, asked Booth for the tree commission’s position on the use of insecticides in the Emerald Ash Borer wars. For trees on public land, the commission doesn’t think it makes sense financially or environmentally to use chemicals, she said.

Use by private tree owners is up to them, she said. The owner of a large, mature tree that is well-located on their property might decide to try to save it or at least delay the death. “We have no position on private trees but we don’t think it should be used on public boulevard trees,” Booth said.

Correction: Local ordinance requires the removal of infested trees once they are deemed dangerous. A previous version of this article incorrectly stated that state law contained such a requirement.