In a lot of American cities, homelessness is a very visible issue. In Portland, homeless people are ubiquitous near the bridges that cross the Columbia and Willamette rivers. In Los Angeles, perennial efforts to clean up tent encampments on skid row only result in homeless people returning to the area. And in San Francisco, officials put $241 million a year into an all-but-intractable homelessness epidemic that’s taxing the city’s overburdened infrastructure, to little avail.

Here in the Twin Cities, you might see a person standing on the highway off-ramp with a cardboard sign that says “Anything helps,” someone swaddled in a sleeping bag on a bench in Rice Park, or a person staying warm on the light-rail line as temperatures plunge on a winter night, but in general, homelessness doesn’t seem to have the same visible face here as it does in other U.S. cities.

Of course, just because a problem isn’t visible, it doesn’t mean it doesn’t exist. But just how big is the Twin Cities’ homeless population? Is the problem smaller here than other cities, or is it just more hidden?

The Amherst H. Wilder Foundation in St. Paul started trying to systematically count the number of homeless people in Minnesota in 1991, in response to a boom in homelessness in the United States in the 1980s. Experts variously attribute the uptick in homelessness to the closing of psychiatric institutions, growing income inequality, cuts to federal welfare programs, and the loss of affordable housing in urban cores as a result of urban renewal efforts.

Every three years on a night in October, Wilder surveys people living in emergency shelters, domestic violence shelters, transitional housing and people found in encampments, at service centers and meal sites across the state. The count includes people who lack a stable place to sleep, are living in a shelter or are sleeping somewhere not intended for habitation.

Homeless people receives $5 to participate in a 30-plus minute interview about who they are and how they became homeless. The last Wilder homeless count was conducted in 2015.

Homelessness in Minnesota, 1991-2015
The number of homeless people counted in Minnesota declined in 2015 for the first time since 2006.
Source: Amherst H. Wilder Foundation

Homeless counts undercount the actual number of homeless people, because they don’t include people who are not found by volunteers or people who have found a temporary place to stay, such as with friends or family. While Wilder counted 9,312 homeless people in the state of Minnesota in 2015, it estimates that 15,000 are actually homeless on a given night, and 40,000 experience homelessness in a given year. There were 3,665 homeless people in Hennepin County and 1,787 in Ramsey County.

The number of homeless people in the state of Minnesota saw a steady uptick from 1991, when Wilder first studied it, through the Great Recession, which saw many people lose jobs and housing. It saw its first decline since 2006 in 2015. 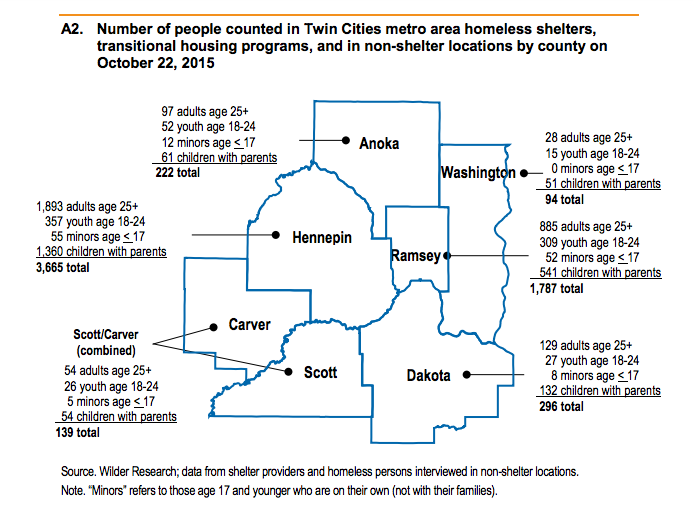 Compared to other cities

Wilder isn’t the only institution counting homeless people. Every year in January, the U.S. Department of Housing and Urban Development collects homelessness data from cities and counties.

That count is less reliable than Wilder’s, said Michelle Decker Gerrard, a research manager at the Wilder Foundation who helps conduct the homeless study, because it's conducted in January and people who are homeless and living outside of shelters in Minnesota in the winter tend to be very hunkered down and hard to find.

But, since HUD’s survey is consistent across U.S. cities and states, it allows us to compare homelessness across the country.

According to HUD, in Ramsey and Hennepin counties, there are about 250 homeless people for every 100,000 residents (a lower figure than Wilder’s estimate), a figure that puts the Twin Cities far below many cities and counties in terms of the share of the population that is homeless.

Homelessness in select U.S. cities and counties
Because of the way HUD tracks homelessness, some estimates are for cities and some are for counties.
Source: U.S. Department of Housing and Urban Development; U.S. Census Bureau

HUD data show that the proportion of the population that’s homeless in the Twin Cities is roughly a fifth the size of Washington, D.C.; a third of San Francisco; and about half that of the city and county of Honolulu. The Twin Cities’ homeless population as a share of overall population is more on par with Chicago in 2015 (2016 data were not available for Chicago).

So, yes, homelessness is less prevalent in the Twin Cities than it is in some other major cities, but it also may be less visible. Compared to somewhere like San Diego, cold temperatures make Minnesota a dangerous place to be sleeping outside in the winter.

“The worse the weather is, the more likely it is that the community will invest in more temporary shelters,” said Steve Berg, vice president for programs and policy at the National Alliance to End Homelessness. “You go to Los Angeles and there’s lots and lots of people on the street, there’s never really been an effort in LA to have enough shelter to shelter all the people who are homeless, so you get a lot of people living on the street.”

The approach to solving homelessness has changed a lot in the last decade, Berg said: Rather than trying to solve the underlying issues — addiction, mental health issues, job readiness — first, and then putting people into housing, an approach favored in the 1990s, research has shown getting people into stable housing and then fixing underlying issues actually works better to keep people off the street.

“The Twin Cities is a place we think of as an example of a place where … the community is really getting together around things that really work,” he said.

Who is homeless in the Twin Cities?

Besides overall numbers, there are many other things the Wilder survey can tell us about the Twin Cities’ homeless populations in 2015: