Last month, a Highland Park-area St. Paul resident, opposed to a draft plan for the Ford site, questioned the wisdom of moving ahead with a zoning plan unpopular with some Ward 3 voters at a St. Paul Planning Commission hearing.

“This is the neighborhood that typically elects mayors,” he said.

Some people on the internet were a bit incensed by what they seemed to feel was an arrogant statement — but it’s kind of true. Wards, by definition, have roughly the same size populations, yet a lot more votes come from some wards, like Ward 3, than others.

Despite Minnesotans’ reputation for being good voters, relatively few vote for mayor. Turnout in the most recent municipal elections, in 2013, the last time the cities had mayoral elections, was 27.9 percent of voting-age citizens in Minneapolis and 15.5 percent in St. Paul. That’s average and below average, respectively.

But take a closer look, and it’s clear that residents of some wards in the Twin Cities turn out to vote a lot more than residents of other wards.

‘The neighborhood that typically elects mayors’

In St. Paul, each of seven municipal wards theoretically encompasses 14 percent of the city’s population (Ward boundaries were redrawn after the 2010 Census). Yet, when it comes to first-choice votes for mayor:

In 2013, Mayor Chris Coleman was running for his third term, and ultimately won with 78 percent of the vote. Within wards, his share ranged from 71 percent in Ward 7 to 83 percent in Ward 4. Independent challenger Tim Holden had his strongest showings, around 20 percent, in wards 6 and 7.

Former St. Paul mayor and City Council member Jim Scheibel, now a professor at Hamline University, said that yes, while residents in some wards vote in higher number than others, you can’t win a citywide race in St. Paul without citywide support.

This year, the first time the mayor’s seat has been open in more than a decade, Scheibel anticipates higher turnout, and he expects to see the disparity of votes between wards to be smaller, as he watches candidates campaign in all the wards. He predicts high-profile issues, like the soccer stadium and the Ford site will drive up turnout in neighborhoods and across the city.

With ranked choice voting, adopted in St. Paul in 2011, “It becomes, I think, even more important that there’s a seven-ward strategy,” he said. “The Eastside maybe doesn’t have [the level of] voter turnout as Highland and Mac-Groveland, but you’re not going to win an election without some strong support on the Eastside.

Turnout was higher in 2013 in Minneapolis, where there was a more competitive election: 35 candidates faced off to succeed three-term mayor R.T. Rybak. On the final round of balloting, now-Mayor Betsy Hodges won with 49 percent of votes.

But the high turnout wasn’t so high everywhere, and Minneapolis’ answer to St. Paul’s Ward 3 can be found in Southwest Minneapolis’ Ward 13. Related to victory or not, that happens to be Hodges’ old council seat, and Hodges got 41 percent of the vote in the first round of voting there, one of her highest shares of any city ward.

With 13 wards, each theoretically represents about 7.7 percent of the city’s population, yet in the first round of voting:

Brian Rice, a lawyer and lobbyist long involved in Minneapolis politics, wasn’t surprised at the high turnout in South Minneapolis.

“That’s always been called the golden crescent; that’s where the votes are,” he said, observing that this was not just the case in municipal elections, though the disparity in votes between wards is more pronounced when there’s no statewide or national races.

But he thinks the dynamics may be changing. Rice predicts higher overall turnout this year, with noticeable increases in wards that have historically seen lower turnout.

Rice said he wouldn’t be surprised to see higher turnout in Ward 3 in November than Ward 13, partly because of growth in the North Loop and northeast Minneapolis areas it encompasses, while ward boundaries haven’t been redrawn since after the 2010 Census, but also because people are energized.

“I think we’re in, potentially, a new era of politics post-2016 election,” he said. “You’re seeing a lot more engagement in municipal elections. You certainly saw that in our precinct caucuses.”

The 2013 Minneapolis vote data also shows a difference in candidate preference among wards. 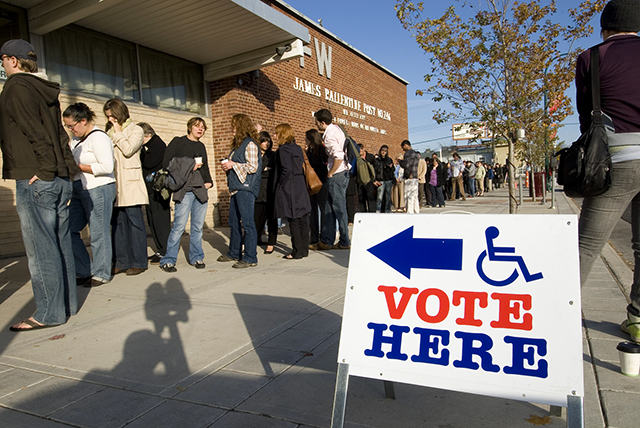 MinnPost file photo by Bill Kelley
Turnout in the 2013 municipal elections was 27.9 percent of voting-age citizens in Minneapolis.

In Ward 5, the section of North Minneapolis that borders downtown, two candidates — Don Samuels and Jackie Cherryhomes, both active in the North Minneapolis community — received more votes than Hodges and runner-up Mark Andrew. Samuels had 26 percent of votes and Cherryhomes had 19 percent to Hodges’ 17 percent and Andrew’s 16 percent.

Andrew got a quarter or more of first-round votes in 1, 3, 7 and 11, and had nearly 50 percent of the votes in Ward 6. Rice, who worked with his campaign, attributes Andrew’s popularity there to working hard in the ward and working closely with Abdi Warsame, who was running for City Council there at the time.

Vote share by ward for Hodges, Andrew, Samuels and Cherryhomes
Support for mayoral candidates varies by ward. Don Samuels and Jackie Cherryhomes both had their best result, in terms of percentage of the vote they won, in north Minneapolis’ Ward 5, the ward with the lowest overall turnout for mayor.
Hodges
Andrew
Samuels
Cherryhomes
Source: Minnesota Secretary of State

Also of note: while in most wards, election results show about 80 percent of voters had second and third choice candidate selections, only 45 percent of Ward 6 voters in the Cedar-Riverside-Stevens Square area had votes counted for candidates beyond their first choice.

Generally speaking, the people who vote in local elections tend to be the most diligent voters, Marschall said. The most diligent voters, research tells us, tend to be the highly educated, who consequently, are also often wealthier.  People who have a stake in local elections – homeowners and parents of school-age kids, for instance, may also be more likely to vote.

But the fact that some people are disproportionately influencing who is elected at the city level can have implications for how the city is run. In the big picture, where the voters are in municipal elections matters for things like government service delivery and finding sites for city projects — desirable or undesirable

“Representation is based on who’s participating, so government officials tend to be more responsive to people who are participating,” she said.

Where the votes that elect Minneapolis and St. Paul mayors come from