Metro Transit is sensitive about the wall.

When the regional transit agency announced in mid-August that they’d finally concluded negotiations with BNSF Railway to share a relatively short stretch of the company’s track in Minneapolis, they also disclosed what they had to offer in return.

If the agency wanted the railroad to agree to share four-tenths of a mile of right-of-way — something needed for the Southwest Light Rail Transit extension from Target Field to Eden Prairie — it would have to give quite a bit. Legally, financially and physically.

That included a crash wall intended to separate existing freight tracks from the proposed light rail line in case of a derailment. The wall — a “corridor protection system” in engineer talk — would run for 1.4 miles, from just south of  where the right-of-way abuts Catholic Charities Higher Ground to just north of where the Kenilworth Trail merges with the Cedar Lake Trail.

When they announced the BNSF deal in August, Metro Transit said the wall would be three-feet thick and up to 10 feet high. That “10-feet” part got much of the attention. “It’s a really big wall and I don’t think we can fool people,” said Met Council Member Gail Dorfman of St. Louis Park said during the August council meeting. “We need to work with the neighborhood and make it the best we can. But we’re not going to hide it. We’re going to see it.”

On Thursday, Dorfman was among the invitees, along with elected officials and a few reporters, who toured the area where the wall will be built. They also got a preview of maps and photo renderings of construction plans, what it will look like and what will be lost during construction. The same renderings will be presented Friday to the project’s Corridor Management Committee, made up of elected and appointed officials from the governments of communities along the SWLRT route.

At the site, stakes in the ground showed the route of the wall and its height (as do the pink paint marks on the piers of the I-394 bridge), which are currently visible to bicyclists and walkers on the Cedar Lake Trail.

As currently designed, the wall isn’t going to be 10 feet high along its entire length. It will be shorter where it runs adjacent to light rail tracks that have been elevated for drainage and grade purposes. Its also located in one of the less-than-scenic parts of the route: It will be built where the tracks bend to the south after leaving a station in the Minneapolis Farmer’s Market area and pass through an industrial area before running past the city’s storage yards and beneath I-394, before finally ending near the Bryn Mawr Station.

The wall will be most visible where the right-of-way passes the Bryn Mawr Meadows Park and sports fields. Park users, as well as residents in the houses that abut the park, could see the wall, depending on the season.

After Thursday’s tour, state Rep. Ray Dehn said it helped him understand how the barrier would look and why it was requested by BNSF. “It doesn’t seem that the wall is going to have as obtrusive of an impact as was initially put out there,” Dehn said. “After seeing the location, after seeing all of the obstacles, I understand why it was requested to be there. It equips me with the knowledge I need to discuss it in detail with those residents that want to have a conversation about it.

“But this would have been much, much easier had there been a conversation with the community before it was rolled out,” Dehn said. 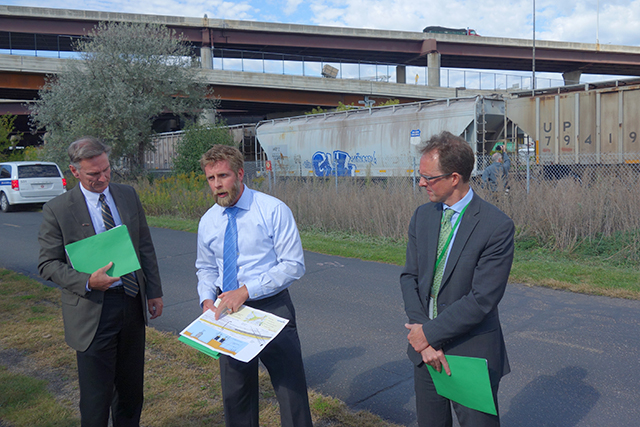 He also said the tour provided an “ah-ha” moment when he asked about ongoing negotiations with BNSF to use eight-miles of railroad right of way for the Bottineau Line from Target Field to Brooklyn Park. “The Met Council didn’t want to fight hard against BNSF regarding this because they have another negotiation that’s going to be much, much more difficult than this,” Dehn said.

Hennepin County Commissioner Peter McLaughlin said the tour helped him visualize where the wall will be located, and how the design already included some crash protection walls even before BNSF demanded more. “I think the impacts are much less than you might think when you first hear about this wall,” he said. “I think it’s pretty eye opening when you actually get out there and see how far away the wall will be in many instances, how it actually sits vis a vis the light rail and where that’s actually gonna be versus the existing existing freight. It shows how modest the change is to the original design.”

The wall has become a target for those who live near the route, many of whom already opposed the rail extension through the narrow and beloved Kenilworth Corridor. Minneapolis elected officials — both from the city and the Legislature — have also complained to the Met Council about the wall.

“As elected officials representing residents of Minneapolis, we are surprised at the lack of information about the proposed barrier wall that has been provided to us,” wrote Mayor Betsy Hodges in a letter cosigned by state Sen. Scott Dibble, state Rep. Frank Hornstein and four city council members: Lisa Goodman, Kevin Reich, Lisa Bender and Cam Gordon. They said they think the changes are substantial enough to trigger a supplemental environmental impact statement, which they said would help “reassure the public that the right questions will ultimately be answered.”

The Met Council disagrees that the wall is enough to trigger additional environmental review, something that would add months to an already troubled timeline. Project Director Jim Alexander said Metro Transit staff does think the wall could trigger federal rules that require mitigation if a project adversely impacts historic resources, however, and the BNSF rail corridor would qualify as such.

It wasn’t just the size and length of the wall that drew fire, though. The same BNSF deal requires Metro Transit to accept much of the legal liability for any accident involving freight trains and light rail trains. It also calls for Metro Transit to challenge any state or city laws that restrict the types of cargo in the corridor. If the city or state tried to ban oil trains, for example, Metro Transit would have to take steps to block the ban and agree to stop running light rail trains if it failed. In their letter to the Met Council, Minneapolis officials wrote that are “deeply concerned” about those provisions.

The timing of the wall also alarmed some observers. Just days after the final agreement was reached, the staff presented it to a Met Council committee. Two days later it was presented and approved by the Met Council itself. 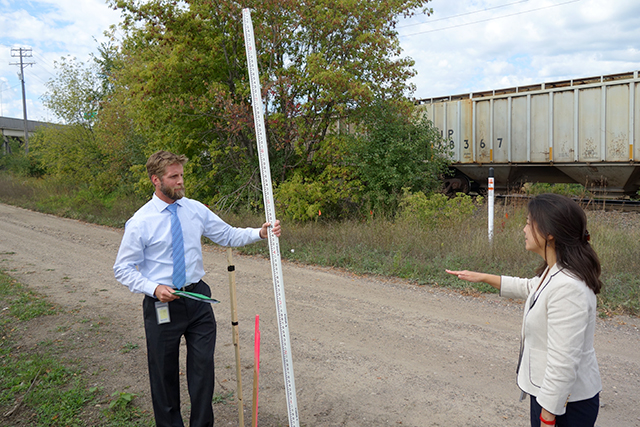 Why the rush? Metro Transit staff said they had to move along their application process to the federal government for half of the $1.858 billion project cost. But since then, Met Council rejected the bids it received for the bulk of the project’s construction work because of issues of cost and other flaws, and has pushed back the timing of its federal application. Yet the railroad deal has moved ahead anyway, which means the project staff is left with designing what could be a $20 million added expense.

Met Council Chair Alene Tchourumoff said the demands made on SWLRT by BNSF are similar to demands made elsewhere. She said that a recent tour of a new light rail line in Denver showed a similar crash wall. And Alexander said BNSF has a strategy of maintaining control over its right of way. On the corridor to be shared with SWLRT, it wants to preserve the potential of building a second line.