In Minnesota, the political season never seems to really end.

And it’s not going to end anytime soon. That’s one consequence of the recent ruling from the Minnesota Supreme Court, which on Friday ordered the governor and legislative leaders into mediation to resolve their latest political dispute. On Tuesday morning it was announced that Dayton and the legislators have chosen retired Judge Rick Solum as mediator.

At the center of the conflict is Dayton’s decision at the end of May to line-item veto funding for the operations of the House and Senate. By Dayton’s account, he used his line-item-veto power so that he could avoid a total government shutdown while also compelling legislative leaders back into negotiations over provisions he didn’t like in several other bills, including a $650 million package of tax cuts. Legislators said that his move violated the Minnesota Constitution by effectively abolishing a separate branch of government, so they took him to court.

A lower court agreed with the Legislature, nullifying Dayton’s veto. But late on Friday, the Minnesota Supreme Court dropped a six-page ruling that said his veto was, in fact, constitutional, and ordered the executive and legislative branch to come back together and figure out a political solution. The two sides were required to hire a mediator by the end of Tuesday and report on the status of the Legislature’s finances by the end of the week.

And yet even the most seasoned political and legal experts say the short ruling leaves a lot of unanswered questions. What’s certain, they say, is that the ruling will have some immediate and potentially significant impacts on the state’s political process.

A look at the key takeaways from the ruling — and what could happen next:

The governor just got more power

The Minnesota Supreme Court ruling is short, but it did say one thing definitely: The Constitution gives the governor power to line-item veto specific budget items from larger budget bills. “Based on the plain language of the … Minnesota Constitution, we hold that the Governor’s exercise of his line-item veto power of the appropriation for the Legislature’s biennial budget was constitutional under that provision.”

Immediately following the ruling on Friday, Dayton released a statement saying he was “pleased” his line-item veto power was upheld. “I am also pleased that the Supreme Court ordered the Legislature and myself to ‘participate in good-faith efforts to resolve this dispute through mediation,’ ” Dayton said. “I proposed just such a remedy, when I issued my veto letter.”

If the ruling becomes the last word on the topic, says Steven Schier, a political science professor at Carleton College, the Supreme Court is setting a precedent that will allow all future governors to veto legislative budgets to continue negotiations. 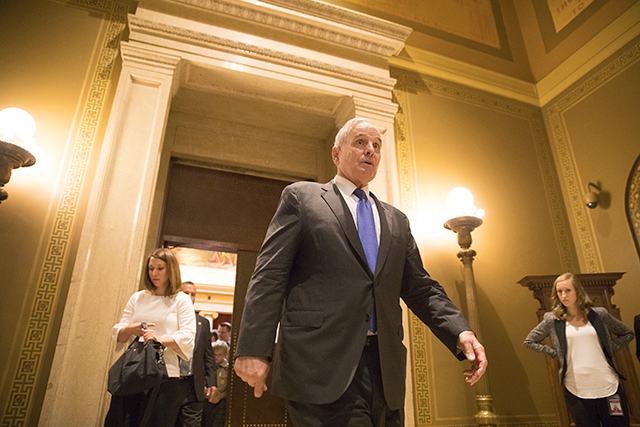 “Let’s say the ruling as is now is law for the future. This is an invitation for every future governor to essentially veto a hostile Legislature and force them back to the table,” he said. “This has the potential for gubernatorial aggrandizement of a sort that we’ve never seen in the history of the Constitution.”

David Schultz, a political science professor and attorney at Hamline University, said the ruling also gives a future governor the opportunity to suspend funding for the judicial branch as well, a question that came up many times in the court proceedings. “What if a future governor wanted to line-item veto the judicial branch because he or she didn’t like a decision?” Schultz said. “This ruling opens them up to that.”

But, wait, Dayton’s actions could ‘soon’ be unconstitutional?

But there was something for the Legislature in the ruling too, particularly the court’s insistence that this ruling does not “end the matter.”

The legislators’ argument was never that the governor doesn’t have the power to line-item veto budget items. They argued that he crossed a line, violating the separation of powers clause in the Constitution when he eliminated funding for the House and Senate, another branch of government. While the court upheld Dayton’s veto, the ruling said if the two parties can’t work out their differences, the legislative branch of government could be in danger.

An earlier agreement between the two parties and the courts funded the Legislature until Oct. 1, but after that the situation is unclear. The House and Senate have a limited amount of carryover funds they can use, and if Dayton and legislators can’t work out their differences, the court could come back and intervene, the ruling notes.

“Our Constitution requires ‘three distinct departments: legislative, executive and judicial,’ ” the ruling reads. “Minnesotans may soon be deprived of their constitutional right to three independent branches of government.”

“We are pleased today’s order recognized Minnesotans’ right to a functioning legislative branch of government,” read a joint statement from Republican Senate Majority Leader Paul Gazelka and House Speaker Kurt Daudt. “While we do not dispute the governor’s line-item veto authority, the court order also recognized that ‘Constitutional powers may not be used ‘to accomplish an unconstitutional result.’ ”

Negotiations at the Capitol could get even messier

What’s also clear is that no emergency funding is coming to the Legislature anytime soon. In its short ruling, the court said it does not think the judicial branch has the authority to authorize any kind of funding, even in an emergency. The Constitution gives the power of appropriation to the Legislature, not the courts.

“We are unaware of any authority that allows the Judicial Branch to authorize spending simply because parties ask a court to do so,” the ruling reads. “In fact our cases suggest that the Judicial branch does not have the inherent power to appropriate money.”

That flies in the face of three rulings from lower courts — all of which were dealing with imminent or ongoing government shutdowns — that the courts can provide funding in the case of an emergency. As a result, the Supreme Court’s ruling could make any future shutdown a lot more painful for Minnesotans and politicians, who were able to at least partially fund state services during the 21-day government shutdown in 2011.

“I think they are trying to back away from it, or are at least saying to the political branches, the Legislature and the governor have to reach some conclusion; otherwise there is going to be a real shutdown,” said Fred Morrison, a law professor at the University of Minnesota. “The court is clearly saying: ‘This is not our potato to handle, this is your potato to handle.’” 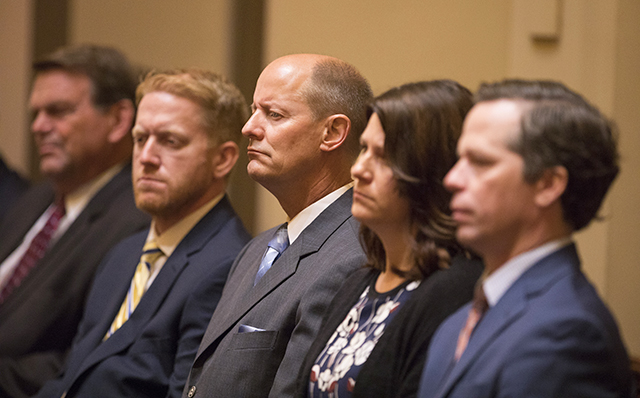 In the hearing over the dispute between Dayton and legislative leaders, Supreme Court justices questioned the Legislature’s attorney about why they adjourned a special session and went home immediately after passing the budget bills, depriving themselves of their constitutional right to try to override his veto (only governors can call a special session, but only legislators can adjourn one). The attorney said it was part of the Legislature’s agreement with the governor: to only pass remaining budget bills and immediately adjourn.

Schultz thinks this ruling might change the way future legislators handle the already-loose agreements made to persuade the governor to call a special session. “The Legislature will just say: ‘We are not going to adjourn until you sign the budget,’” Schultz said. “It undermines the goodwill and trust that goes into calling a special session in the first place.”

This is far from over

The Supreme Court did not send the case back to Ramsey County District Court, where the case was first heard. Instead, it left the matter open and ordered the two parties into mediation to work out their differences.

It’s clear the court really wants them to work things out themselves: “Prior to the Judicial Branch vindication of the people’s constitutional right to three independent, functioning branches of government, the other Branches should have the opportunity to resolve this dispute.”

For now, at least, both sides have said they want to go into mediation in good faith. If that goes well, they could strike an agreement and the governor could call a special session to re-pass legislative funding and any other outstanding issues.

If things don’t go well, they could end up back before the state Supreme Court for new oral arguments and a new ruling could be issued. It’s a tough choice for legislators, who risk getting a similar ruling from the court the second time around on the constitutionality of Dayton’s veto.

But the alternative may even be less palatable for lawmakers, Carleton’s Schier says: negotiating away bills Dayton already signed into law.

“What incentive do Gazelka and Daudt have?” he said. “They see that their institutional power diminishes if they cave at this point. They are going to see this as a real threat to their existence.”