Those who are worried about the impacts of a proposed streetcar line between downtown St. Paul and the Minneapolis-St. Paul International Airport can take some comfort in the fact that it will be six years before any construction starts.

And those who are excited about the line — which, under a plan recommended by an advisory committee Thursday would leave downtown via West 7th Street, cross the Mississippi River and join the Blue Line at the Fort Snelling station — will have to wait 10 years for the service to begin.

Such are the timelines for mass transit projects in the United States, and even those schedules assume that the project will get local government buy-in, wins federal support and meets stringent environmental, engineering and financial requirements.

That’s what Ramsey County Commissioner and Riverview Corridor Policy Advisory Committee Chair Rafael Ortega called “the nature of the beast.” And that was the context of a vote Thursday by the elected and appointed officials on the committee charged with making decisions about the project.

While recommending a route and a mode of transit for what’s known as the Locally Preferred Alternative is a milestone for the project, there are so many more to come — and so many potential changes — that it seemed less momentous than it actually was.

“I don’t want to minimize the importance of this as a first step because it is an important step,” said Howard Orenstein, an attorney for Hennepin County who was representing Commissioner Peter McLaughlin. “But it is only a first step and there will be many, many opportunities to revise this, to enhance this, to refine this to make sure concerns can be met as best as possible.”

Even after choosing a mode — modern streetcars, not bus rapid transit or light rail — and a route, the advisory committee isn’t finished choosing. A public hearing will be held on this choice Nov. 9 and a final vote will be held Dec. 14.

Then comes years of environmental and engineering work before the project can even apply for federal matching funds, which is expected to cover around half of the construction costs. And even though the anointed Locally Preferred Alternative has the best odds compared to those not chosen, it would be well behind other projects in line for funding around the nation.

Still, Ortega, the elected official who has been at it the longest, was happy with the step taken Thursday. “This corridor has been on our radar since I’ve been in office,” said Ortega, who was first elected in 1994. “It is part of what we call the triangle … for the entire region.”

What was at one time going to be the first rail corridor has been delayed so long that it will now be the fifth, behind even the Southwest LRT extension of the Green Line and the Bottineau extension of the Blue Line. And those two Hennepin County lines only exacerbate something Ortega has long lamented: the imbalance in rail funding between the west and east Metro.

But one factor that moved Riverview from first to last in the region also threatens it again — concerns by merchants and neighbors along St. Paul’s busy West 7th Street that they would lose parking and business during construction, and even after it is completed. The streetcar option was already a concession to opponents since the cars can share traffic lanes and are shorter than light rail trains. 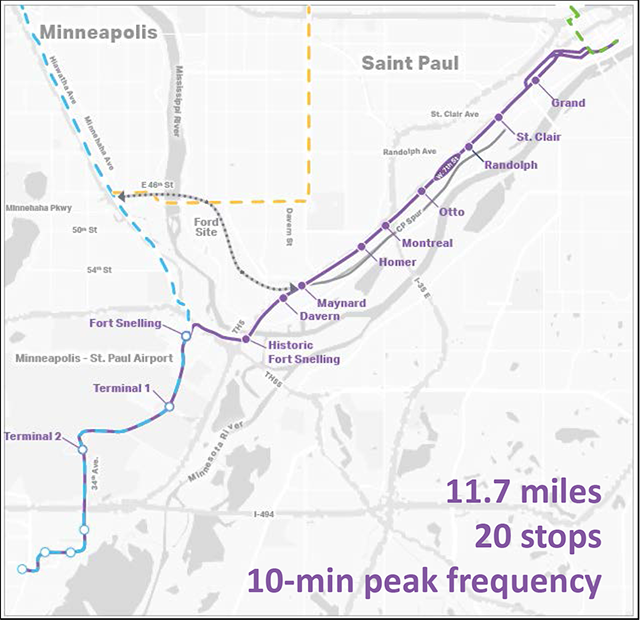 Riverview Corridor Pre-Project Development Study
Under a plan recommended by an advisory committee, the streetcar line would leave downtown via West 7th Street, cross the Mississippi River and join the Blue Line at the Fort Snelling station.

Pat Mancini, who owns Mancini’s Char House on West 7th and is a member of the Riverview Corridor advisory committee, complemented Ortega for running a process that communicated the issues well, though opposes the use of any use of rail on the project, preferring enhanced bus service.

Mancini lamented that the favored alternative, despite being called the Locally Preferred Alternative, is actually the federally preferred alternative. That is, he said, it rises to the top because it best meets federal measuring sticks used to decide funding rather than meeting local needs. Those ratings measure factors such as how a project serves transit-dependent riders, how many riders it will serve, whether it would boost economic development and how cost effective it is as measured by riders per dollar spent.

The Riverview Corridor project is expected to receive a “medium” rating by the Federal Transit Administration, which could be a problem. Jon Commers, an advisory committee member and a member of the Met Council, said that most of the 65 projects in the federal funding pipeline have ratings of “medium high.” “A ‘medium’ rating is not a ticket for us to move this project forward,” he said, though there is time and opportunity to increase the rating.

For once, however, the non-federal money for the project is less of an issue. Since the dissolution of the Counties Transit Improvement Board and the doubling of a transportation sales tax in Hennepin and Ramsey counties, there should be more local money available for the Riverview project, absent any future changes by a Republican Legislature hostile to this and other rail transit projects.

The route will take streetcars from West 7th Street over a new bridge near Hwy. 5 before tunneling beneath Fort Snelling. Some iterations of the corridor would have swung tracks further west and north before crossing to Minneapolis on or near the Ford Parkway bridge. Those options would have helped meet the transit needs of those who might live and work at the Ford site — if it is redeveloped as Ford and the city of St. Paul hope.

But those alignments were rejected, first by a technical advisory committee and by the policymakers, who agreed that the routes would cost more, make for a longer trip and not carry as many passengers. And it likely would have scored lower with the Federal Transit Administration, had it reached that stage.

The Ford plan, however, needs better transit options to meet its goal of keeping automobile traffic from overwhelming the surrounding streets and neighborhoods. St. Paul Council Member Chris Tolbert, a Riverview Corridor advisory committee member, pushed an amendment for a mandatory study of ways to serve the Ford site as well as Highland Park, perhaps with a spur using the Canadian Pacific Railway right-of-way connecting to the proposed line before it crosses the river. 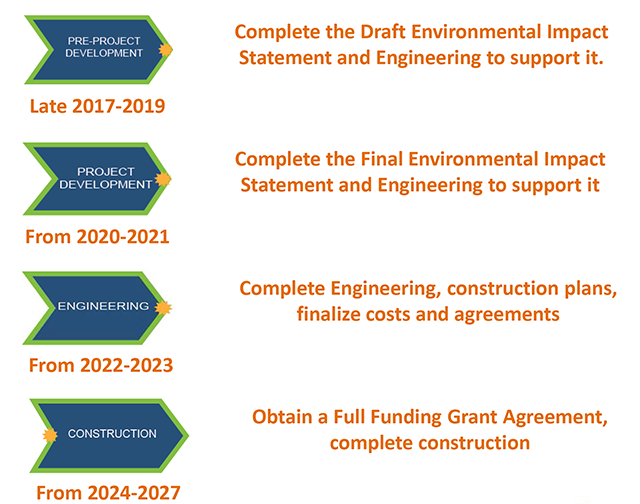 “As this group has found out, there are two distinct travel markets here that are underserved and need to be better served,” Tolbert said. “We want to ensure that the one we don’t choose doesn’t fall by the wayside.”

The Riverview Corridor just reached a big milestone. So why doesn’t it feel that way?