How would you like to rent out a five-bedroom Victorian near Eat Street in Minneapolis, replete with gardens, an updated kitchen and a clawfoot bathtub? That’ll be $175 a night, your host will be John. Or how about Chris’ circa 1949 houseboat docked in St. Paul? $199 a night, with a river view. A bedroom in Hannah’s “perfectly-located” Northeast Minneapolis charmer? $55 a night.

You can find all of these accommodations listed on short-term rental platform Airbnb in the Twin Cities, and more: There are more than 1,800 active listings on 25 online platforms in Minneapolis and about 500 in St. Paul, according to Host Compliance, a company that helps cities monitor short-term rentals.

There’s a catch though: None of these rentals is technically legal.

But the city councils in Minneapolis and St. Paul are working to change that. With February’s  Super Bowl at U.S. Bank Stadium, both cities are actively discussing ordinances aimed at regulating this industry — not to mention collecting a little  revenue.

“Cities are in a pretty dynamic phase of experimentation about the best way to regulate (short-term rentals),” said Eric Goldman, a professor at Santa Clara University School of Law.

Most cities share a professed desire to ensure short-term rental guests are safe, and, of course, want to collect taxes. Beyond that, the different approaches reflect different needs of different cities, Goldman said. In some places, such as San Francisco or New York, there’s more pressure to preserve the rental stock for city residents, while in other spots with more second homes — say, Palm Springs — hosts generally appreciate being able to rent out their homes when they’re not using them.

In St. Paul, city staffers have been working to develop proposed regulations that balance the demand for short-term rentals with safety. A city proposal would limit short-term rentals to half of the units in a multidwelling building, up to four total; would disallow commercial or social events, require hosts to pay a $70 fee to be licensed and require them to pay lodging and sales tax (typically, St. Paul’s lodging tax is 3 percent, in addition to sales taxes and transit taxes, for establishments with less than 50 rooms), property insurance, and require non-owner-occupied units to have fire inspections, plus require platforms to pay $7,000 to operate in the city (St. Paul imposes a $30,000 licensing fee on ride network platforms like Lyft and Uber), among other provisions.

At a public hearing last week, the City Council heard from residents and business owners on both sides of the issue.

Some welcomed the regulations legalizing the rentals the Airbnbs they’ve been running for years. Susan Clarke, a resident in her seventies, said the income has allowed her to upgrade her house. 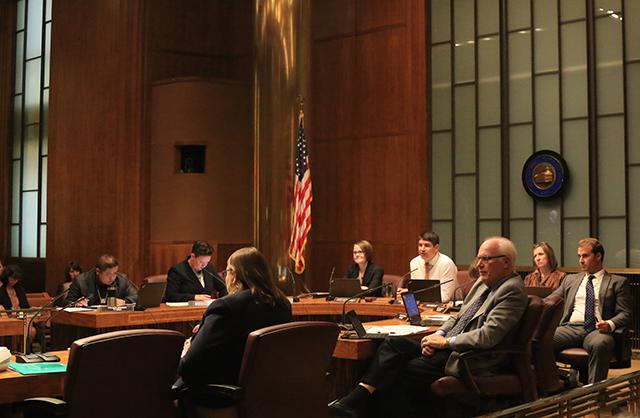 MinnPost photo by Greta Kaul
At a public hearing last week, St. Paul city council heard from residents and business owners on both sides of the short-term rental issue.

But others asked for stricter controls. Liz Miller, inkeeper at the Covington Inn, a bed and breakfast, called the rentals unfair because they are more loosely restricted than businesses like hers. Anybody who wants to run an inn can buy the Covington, she added — it’s for sale.

And neighborhood residents from the Crocus Hill area said rentals have changed their neighborhood, bringing noise and parking hazards.

A draft ordinance in Minneapolis, which would require operators of short-term rentals to be licensed, will be a topic of discussion at a City Council community development and regulatory services committee meeting Tuesday.

It’s one thing to pass an ordinance regulating short-term rentals — it’s quite another to enforce that law and make sure hosts are complying.

St. Paul’s plan is to respond to complaints; any complaints filed would result in an investigation of the property. They would also conduct periodic audits. This is similar to the approach the city takes for ride network apps like Lyft and Uber, said Dan Niziolek, the deputy director of St. Paul’s Department of Safety and Inspections. The city envisions the work would take about half of a full-time city employee’s time.

Whatever form the final rules take, experts say enforcing them can be a challenge, with short-term rental platforms like Airbnb historically hesitant to provide municipalities with some of the data that would help enforce their rules.

“The first thing you need to acknowledge is this is an industry that was really created by technology,” said Ulrik Binzer, the CEO of Host Compliance. “If you try to approach enforcement from an old school, manual approach, you’re probably going to be unsuccessful. It’s kind of like bringing a knife to a gunfight.”

Binzer has an interest in saying that: Host Compliance is a company that has helped cities, including Denver, Los Angeles and Oakland, with enforcement of short-term rentals. He estimates there are 125 hosting websites in the short-term rental market — it’s not just Airbnb. Listings often appear, only to disappear shortly after, sometimes appearing on other sites, and hosts may be underreporting their income from sites.

“You need to really be on top of these websites all the time, and you need to constantly monitor them,” he said.

His company scans listings frequently to estimate their locations to determine the number of nights booked. It determines who’s likely to be a scofflaw and sends them a letter on behalf of the city.

“If you took an inventory at the beginning of the year, what you’ll find is 75 percent of the market has completely turned over. You can’t just do it on a quarterly or annual basis,” he said.

If cities’ processes aren’t quick enough, people will take down listings and put them back up, or migrate their listing to another site, Binzer said.

“There’s certain cities where the city built a very onerous and complicated process for tracking down people and getting them into compliance, so people start speculating,” he said.

Getting the platforms to play ball

San Francisco imposed a licensing requirement on short-term rentals in 2014, and in 2016 found that about 85 percent of listings were unregistered. That city has a department whose job it is to deal with the thousands of short-term rental listings across its neighborhoods.

Only after a legal settlement this year, a year in the making, was San Francisco able to successfully convince Airbnb provide more information to help enforce regulations. Under a new registration system, hosts with new listings will have to give their name and address, and the platform will turn the information over to the city.

Niziolek said that recent settlements with cities makes St. Paul optimistic that platforms will play ball, providing addresses of listings within the city. In St. Paul’s proposal, it would be the city’s job to notify platforms of any listings that are not in compliance with ordinances within its boundaries. Platforms would then be responsible for booting them.

When it comes to enforcing the tax side of things, things can also be tricky, Goldman said. By pulling up Airbnb listings, city employees ought to be able to see listings on which taxes should be paid. But listings are not always under the name of the person responsible for paying taxes. Furthermore, without necessarily having the data from platforms, it’s tough to know for how many nights guests have stayed.

St. Paul’s audit process would include the city comparing city tax records for a random sample of hosts with the ones received by the Minnesota Department of Revenue. Niziolek said hosts will be required to keep logs, and that if it came down to suspecting someone of an egregious violation, the city could subpoena records.

So far, it’s been difficult for the city to study the extent of short-term rentals in its borders. “Right now, it’s kind of hard to get the data because nobody’s licensed and the platforms aren’t sharing a whole lot of data,” Niziolek said.

He emphasized that the regulations were designed to be a start, aimed at codifying the nascent web platform-based home sharing economy in St. Paul.

“We’re hoping that this first-run at short-term rentals will be a good ordinance, but it will be a living document,” he said.