Gregg Peppin’s usual meeting spot is a nondescript lounge in a grocery store in Maple Grove.

It’s much quieter than the bustling, trendy coffee shops in the nearby Twin Cities, and people are less likely to be recognized in the quiet suburb, just 20 minutes north of Minneapolis. Peppin, who’s tall and lean and likes to joke that he started this work when he still had hair, isn’t someone most passersby would know on sight. But they might know the people he’s meeting with: candidates for governor, Congress, or even current leaders in the state Legislature.

In Republican political circles, Peppin has built a career working behind the scenes, recruiting and running GOP candidates. In the late 1990s, he helped the party win the Minnesota House after it had spent more than a decade in the minority. Since then, he’s worked on dozens of Minnesota Republican campaigns, most recently helping recruit the current chair of the Republican Party of Minnesota, Jennifer Carnahan. He even met his wife, Joyce Peppin, the current majority leader of the House of Representatives, when he recruited her as a field staffer for the House campaign committee.

He does his work with an intensity that’s well-known in political circles, even if it’s sometimes made him unpopular with fellow Republicans.

“There are are only a handful of people in the state, or possibly no one in the state, with his level of experience,” said Jeff Johnson, whom Peppin helped during his 2014 campaign for governor. “He is intense and he is emotional, but the strength of the relationships he forms you just don’t see a lot, especially with intense people. He inspires a lot of loyalty.”

These days, Peppin’s project is Minnesota’s wide-open 2018 governor’s race, the best shot Republicans have at the office in nearly a decade. Though there are already 11 people running for governor on the Republican side, Peppin has traveled the state trying to recruit more people to run for the job.

It’s an approach that’s rubbed foes, and even some friends, the wrong way over the years, Peppin admits. But he’s a firm believer that Republicans, more than anyone, should be open to a little friendly competition. Or as he likes to say: “Steel sharpens steel. If there are multiple candidates in there, everybody is going to get better.”

From ‘wonk’ to campaigner

Growing up in Golden Valley, the closest Peppin got to the world of politics was an “Archie Bunker for President” T-shirt he wore around the neighborhood with a childhood friend. His parents weren’t particularly political, and Peppin’s father imagined he would go into the business world.

Peppin went off to the University of Minnesota for college and was drawn to history and political science, but he was also spending a lot of his time working at a Lund’s grocery store, where he was making good money as a manager. He briefly considered dropping out of college and continuing at the grocery store, but when he finished his degree he was lucky enough to land a job in the Minnesota House of Representatives as a researcher in 1988. Peppin had to cover a lot of areas of policy, researching things like labor management, pensions and commerce. He loved the job, describing himself as a “policy wonk.”

Back then, Republicans were in the minority — and had been for years. “I would go to committees and I would have all these policy ideas, but if you’re in the minority it didn’t matter because none of it was going to get adopted,” he said. “I realized we needed to try and win the majority.” 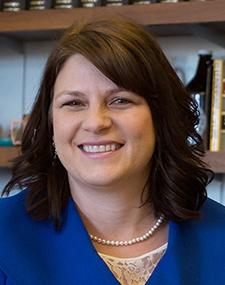 He would spend his weekends and evenings volunteering to knock on doors for Republican legislative candidates. His first campaign was for Denny Newinski, running for a seat in Maplewood. Newinski was running against an entrenched Democratic incumbent, and most Republicans didn’t see a path to victory — but Peppin did. Newinski had a blue-collar background that fit the district, and he could see how the candidate was connecting with voters when he went door-knocking.

“His district was on my way home from work, so I would stop by and knock on doors,” Peppin said. “I told the caucus, ‘I’ve been helping this guy and I think he has a chance to win.’”

Newinski ultimately did win the seat, and Peppin moved into regular campaign work, taking election years off from his researcher job to work at the House Republican Campaign Committee.

It was in that role that he traveled the state with then-Rep. Steve Sviggum to meet with prospective candidates for the Legislature. “We would get in the car and we would drive after work to go someplace and recruit a candidate,” Peppin said. “It was just tons of windshield time.”

Peppin knew a few qualities made a good recruit: a hard worker, a strong communicator with a clear vision and ability to raise money. But through his travels with Sviggum, he also learned that what made a good candidate in one part of the state didn’t necessarily transfer to another region.

“We used to joke and we would go to places and the people in Greater Minnesota would say, ‘Well, it’s different out here,’ ” Peppin said. “I didn’t get that at first. I thought you could just take the candidate that could win in Maple Grove and he or she would also do well in somewhere like Roseau, but that’s just not true. They’ve got to fit the district.”

With the candidates recruited by Sviggum and Peppin, Republicans picked up more than a dozen seats in the 1994 midterm election. Then, in 1998, they captured the majority, the first time Republicans had controlled the House in 12 years. With his party now in power, Peppin got to take the lead on certain policy issues like redistricting, while still continuing to take off election years to work on campaigns.

“He and I did a number of recruiting trips together,” says Golnik. “We would go to different chambers of commerce and ask if they had any candidates to run, and they would tell us to look into the general manager at the local Coborn’s store, so we would look into the person at Coborn’s,” Golnik said. “He knew where to look and he knew which issues and which qualities play in different parts of the state.”

In 2006, Democrats managed to take back the House from Republicans. At the time, Peppin’s wife, Joyce, was a rising star in the Legislature herself, representing the Maple Grove area. They had two daughters at home and it no longer made sense for both of them to be stuck in St. Paul until the early hours of the morning during the session. 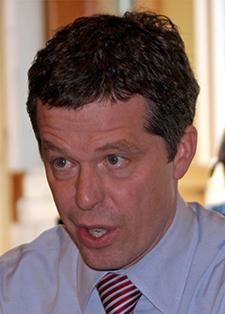 So in 2008, Peppin made the decision to leave the Capitol and start a company, P2B Strategies, a consulting firm for Republican candidates that also did issue advocacy at the Capitol. In that role, he was able to touch back to some of his early work on policy issues, but he couldn’t stay away from recruiting and working for Republican candidates. His business worked with the fledgling campaigns for plenty of legislators since then, including newcomer Reps. Regina Barr and Sandy Layman. He also worked with Jim Hagedorn, a Republican who has challenged U.S. Rep. Tim Walz twice and is running again this cycle.

He also met with Carnahan, a Republican candidate for a tough Minneapolis Senate district who was frustrated with a lack of help some candidates got from the party. She floated the idea of running for party chair, and Peppin told her to file the idea away. A year later, the newcomer to Republican politics would surprise everyone and win the race for party chair against longtime party veterans.

“I encouraged her and said this was going to be an uphill climb, but she’s incredibly smart and a different face and a different voice for the party,” Peppin said. “I just saw all of the talents and traits of someone who, if delegates would get to know that person, would really make some headway.”

A ‘multiplicity’ of candidates

When Peppin meets with a candidate he likes, he makes sure they know right off the bat that he’s probably meeting with others. “I say, ‘There’s my number to call me, but if somebody else comes along, I’m going to talk to them too,’ ” Peppin said. “I want you to know that we’re Republicans and we believe in competition and the best candidate will rise to the top. My phone number is here, as it will be for everybody else.”

It’s part of Peppin’s long-held political philosophy of the “multiplicity of candidates,” or the idea that having more candidates in the competition will make everyone better. He not only believes having competition will sharpen debate skills and messaging, but it will better a candidate’s fundraising game. He’s also tried to recruit more diversity into the Republican Party, which has never backed a woman in the race for governor.

“The activists and the delegates are discerning enough to determine who’s good, who’s worthy of that, and we should give them options,” Peppin said. “That has caused some heartburn in some of the recruiting that I would do for the Legislature.”

Looking ‘to be that middle person’

The first word most use to describe Peppin is “intense,” the second is “serious.”

Johnson, who is running for governor again this cycle, said people have strong feelings about Peppin “because he’s an intense guy.”

“But the one thing I noticed is his relationships with the candidates and potential candidates are really strong relationships,” Johnson added. “He’s really a relationship guy. There are a lot of candidates that he’s recruited and helped over the years who are very loyal to him and just think really highly of him.”

As part of his efforts to find a candidate for next year’s race for governor, Peppin’s already traveled the state to meet with prospective Republican candidates — and he’s been shot down a few times. But he expects he’ll be involved in a campaign when it gets down to the Republican endorsing convention for governor next in June.

Peppin wants to work in a Republican gubernatorial administration. In particular, he thinks he can use those relationships he’s formed over the years to try to bridge a deep divide that’s formed between the executive and legislative branch. Gov. Mark Dayton and the Legislature are currently in the midst of a months-long legal battle over Dayton’s move to veto funding for the House and Senate.

When he was a young legislative staffer, Peppin met former Gov. Arne Carlson, who was making the rounds and visiting researchers and other staffers around the Capitol. That made a huge impression on him — he still cherishes a photo he has from the meeting. 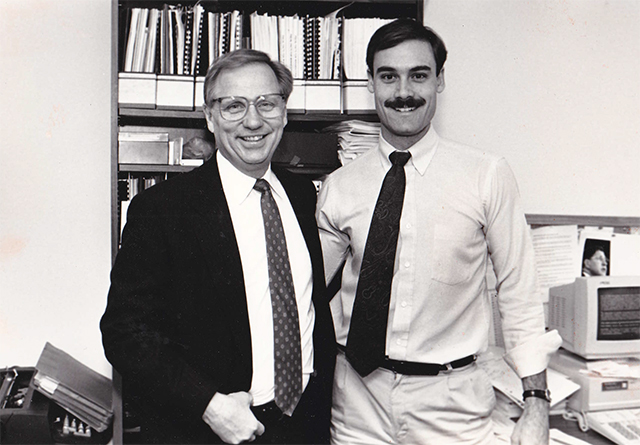 “If there would be one small part I could play in addressing the extreme partisanship and sometimes the gridlock, it would be just having the legislative experience to talk to Democrats and talk to Republicans and be that middle person,” he said. “If I were to work in an administration, that would be a value that I could bring, trying to explain the governor’s positions and sell them to the Legislature.”