An anonymous campaign mailing criticizing Minneapolis City Council candidate Gary Schiff for accepting developer and business money might have come from an unlikely source — one of the region’s most politically active developers.

A complaint [PDF] filed with the state Office of Administrative Hearings under the Fair Campaign Practices Act claims that Steven Minn, who co-owns Lupe Development and is also a former Minneapolis City Council member, rented the Post Office Box used as the return address on the otherwise anonymous mailing. The complaint states that the box was first rented in the last month.

The complaint was filed by Paul Birnberg, who lives in Ward 9 and said he was unhappy with the anonymous nature of the mailing, something that could violate campaign finance disclosure laws.

“I was just curious,” Birnberg said. As an attorney specializing in landlord-tenant law, Birnberg is familiar with the process used to get information on post office boxes. He filed a document saying that he was considering filing a legal complaint against the box holder and was a bit surprised that a mailing criticizing developers might have come from a developer.

The mailing arrived in an unknown number of Ward 9 homes the day before the election.

“I am a concerned citizen and neighbor,” read the statement. “I prefer to remain anonymous, but I won’t be making an attack on any candidate so my name should not matter.” It went on to say that “as a public service” the person responsible for the mailing had copied Schiff’s campaign finance reports and discovered that “most (85%) of the $70,545 in contributions itemized on Gary’s report comes from real estate, business interests, architects and contractors who will appear before Zoning and Planning in the future. Gary chaired Zoning and Planning for 12 years and wants to return to that post.”

Once Birnberg received the name and address he traced the address to the Edina home owned by Minn and his wife and business partner Lucille Minn.

“A person living (at that address) is not my neighbor,” Birnberg wrote in the complaint. “Indeed he not only does not live in my neighborhood, he does not live in my ward or even in my city.” Birnberg notes that state campaign finance laws requires that campaign material contain the name and address of the people or groups responsible for preparing and disseminating it. 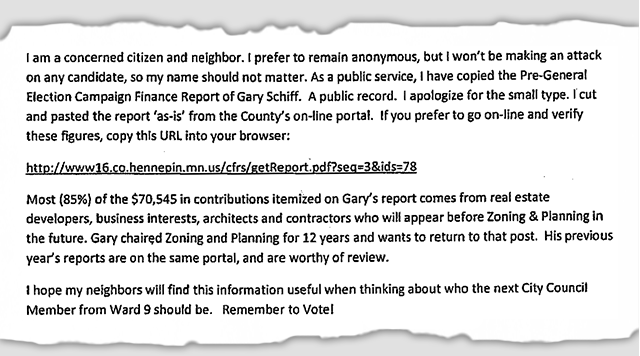 The politics in this situation are complex. Minn is a founder of Minneapolis Works!, a business/developer independent activities committee that supported a slate of city council candidates, both incumbents and challengers. Among them was Mohamed Farah who, like Schiff, was challenging incumbent Council Member Alondra Cano.

Mail sponsored by Minneapolis Works! was both promotional for Farah and critical of both Cano and Schiff. One pictured both candidates along with a headline that starts on the front and finishes on the back and reads: “While politicians Gary Schiff and Alondra Cano only look out for themselves …No one is looking out for Ward 9. 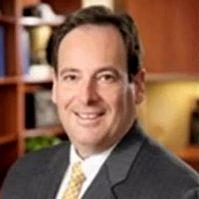 Cano finished first on election night with Schiff second and Farah third. When Farah’s second-choice ballots were counted, Cano was pushed over 50 percent and was re-elected.

While Minn gave a $600 contribution to Farah, it was the only contribution identified as being from the development community, according to an analysis by MSPVotes. That same analysis shows that it was Schiff, not Farah, who received most of the developer money: $9,150.

But Schiff had some run-ins with Minn while Schiff was on the council previously. And he was critical of Minn when it was discovered that Minn had created email accounts under fictitious names to criticize projects by another developer.

Birnberg said he doubts the mailing affected the outcome and said he thinks Schiff would have lost regardless. But he said he found the mailing “beneath contempt.” It cost him $50 to file the complaint and any fines go to the state.

Correction: This story was updated to insert words that were inadvertently left out in quotation from the anonymous post.