The federal investigation into ties between the Russian government and the campaign of Donald Trump has led to a first round of charges against three former campaign officials — including the president’s one-time campaign chair, Paul Manafort.

The consensus in Washington is that the Federal Bureau of Investigation’s special counsel, Robert Mueller, is just getting started as he attempts to find out the extent, and content, of communication between Russian government agents and Trump campaign officials. Manafort’s indictment may lead — if it has not already — to Mueller and his team setting their sights on a figure familiar to many Minnesotans: Vin Weber, the former congressman from the 2nd District who’s become a powerful lobbyist.

Manafort and his associate, Rick Gates, were hit with 12 criminal charges related to Washington lobbying work they did on behalf of the Russian-aligned government of Ukraine — charges that include money laundering, tax evasion, and conspiracy against the United States.

Through a third-party organization he set up to advance his longstanding Ukraine work, Manafort directed hefty contracts for D.C. lobbying to two firms, one of which is Mercury Public Affairs, where Weber is the D.C. principal, and where he handled the Ukraine-related portfolio in 2012.

Legal experts say that Weber could play an important role going forward — potentially as a witness — as Mueller builds his case against Manafort and Gates, both of whom pled not guilty to all charges.

Mueller’s indictment centers around work that Manafort and Gates did on behalf of former Ukrainian president Viktor Yanukovych, an ally of Russian President Vladimir Putin. Yanukovych fled to Moscow in 2014 after mass protests against his rule, focusing on his opposition to closer ties with the European Union, and his government’s reputation for corruption and cronyism — a reputation the man himself even seemed to embrace.

Before he joined the Trump campaign in summer 2016, Manafort was a lobbyist who specialized in leveraging his political connections — he was a longtime Republican operative — in the service of foreign governments wishing to expand their influence in D.C.

Manafort did work for Yanukovych as early as 2006, and continued to work for the leader as Yanukovych sought to burnish his image in the U.S. as a democratically minded potential friend, eager to align himself with the European Union and the West. Manafort and his team saw value in enhancing Yanukovych’s reputation in this way, though the Ukrainian leader took clear steps to bring his country closer to Putin and Russia after being elected in 2010.

Manafort and Gates are accused of obscuring substantial profits from their work for Yanukovych and his political party from U.S. authorities by placing them in offshore accounts to shield them from taxation. They are also accused of obscuring the financial sources of their lobbying work in the U.S. by setting up a third-party organization: the European Centre for a Modern Ukraine.

Based in Brussels, the Centre was billed as a think tank backed by Ukrainian citizens hoping to burnish their country’s case for EU membership. Manafort and Gates allegedly used it as a front to advance the project of improving Yanukovych’s image in the West.

Through the Centre, Manafort and Gates directed contracts to U.S. lobbyists to do the actual work of influencing lawmakers, political operatives, and government officials in service of that project.

Chosen by Manafort and Gates for that work was Mercury Public Affairs, a lobbying firm with offices in several states, Mexico, and the United Kingdom. Weber, a Republican who represented Minnesota’s 2nd District from 1981 to 1993, is a partner at their D.C. practice.

Last year, as Manafort’s Ukrainian work came under greater scrutiny and led to his resignation from the Trump campaign, the Star Tribune reported that from 2012 to 2014, Weber had been paid close to $700,000 to lobby for the Centre in Washington. The other lobbying firm to get contracts from Manafort and the European Centre was the Podesta Group, run by Democratic power-player Tony Podesta.

In the 31-page indictment of Manafort and Gates, Mercury and Podesta are listed as “Company A” and “Company B,” respectively, which was confirmed by NBC News.

The discussion of these companies in the indictment centers around funding for the Centre: If it was funded by Ukrainian citizens, as Weber told the Star Tribune he was led to believe, he would not have had to register as a foreign government lobbyist under U.S. law, which requires disclosure of key details for lobbying funded by foreign governments.

The indictment makes the case that the Centre was a front for Manafort and Yanukovych, meaning that Weber and the other lobbyists were effectively acting as unregistered lobbyists for a foreign government — a felony offense, and one of the things Manafort himself is charged with.

“At the direction of Manafort and Gates, Company A and Company B engaged in extensive lobbying,” reads the indictment. “Among other things, they lobbied multiple Members of Congress and their staffs about Ukraine sanctions, [and] the validity of Ukraine elections.”

The indictment also lays out reasons that could have led the lobbyists to believe Manafort and Gates were conducting the operation on behalf of Yanukovych, not the Centre. “Company A and Company B were paid for their services not by their nominal client, the Centre, but solely through offshore accounts associated with the Manafort-Gates entities,” it says.

The indictment also states that, in the wake of reports on Manafort’s ties with Ukraine, Gates sent out “false talking points” to Company B, the Podesta Group, which provided non-answers to potential questions about who was bankrolling the Ukrainian lobbying campaign.

The investigation revealed emails between Gates and a “principal” at the Podesta Group, exchanged in August 2016, as revelations about Manafort’s ties with Ukraine began to surface.

The principal emailed Gates, saying he or she believed he was “much more involved than this suggests… We will not disclose that but heaven knows what former employees of [Company B] or [Company A] might say.”

According to Stephen Saltzburg, a professor of law at George Washington University, it’s unclear if similar talking points were communicated to Mercury. But the exchange between Gates and Podesta Group, he says, “begins to look like a conspiracy.”

In the wake of the indictment, Tony Podesta resigned from the Podesta Group, sending shockwaves through D.C. There is no evidence thus far of similar moves at Mercury.

Where does Weber fit in? 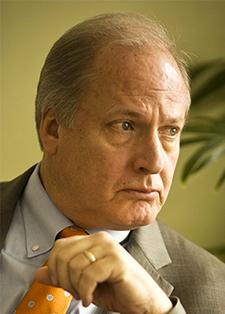 Last year, Weber told the Star Tribune that he believed the purpose of this lobbying work was to help steer Ukraine toward the U.S. and the EU, and away from Russia. (Weber did not respond to requests for comment from MinnPost.)

He said that Manafort framed the venture as one supported by Ukrainian citizens in favor of their country joining the EU, and that he had written assurances that it was not backed by a government entity. The indictment suggests otherwise: It says that in February 2012, Gates wrote to Mercury, saying it would be representing “the Government of Ukraine” in Washington.

Weber did not register as a foreign lobbyist at the time, regardless of the extent of his knowledge of the Centre’s true funding. However, sometimes federal authorities permit lobbyists to retroactively update their lobbying disclosures with more information. BuzzFeed reported that Mercury did this in 2017, updating its Ukraine file to indicate that meetings had taken place between Weber, Manafort, and Washington officials related to the lobbying campaign — contradicting previous claims made by Weber that he had not coordinated any efforts with Manafort or Gates.

The federal government rarely prosecutes lobbyists who fail to properly file their work for foreign governments. However, the failure of Weber and other lobbyists to do so in this case, legal experts say, mean they could be of use in Mueller’s investigation of Manafort — potentially as targets for prosecution, or as witnesses.

By bringing in Manafort and Gates on charges not directly related to their involvement on the Trump campaign, Mueller is using a classic white-collar crime prosecution tactic. He is hoping to put pressure on them in a bid to earn their cooperation, which could lead to revealing information about the Trump campaign’s ties with Russia.

“Mueller wants more cooperation to the hilt,” Saltzburg says. He’s not sure if Mueller needs Weber, “but if Manafort plays hardball, they’re going to make these people witnesses. This is clearly designed to increase the pressure on Manafort and Gates.”

David Sklansky, a professor of law at Stanford University, says that much depends on what Mueller believes the criminal liability of Weber and other lobbyists could be. “That will depend on what the evidence he has suggests they knew about what Manafort and Gates were up to,” he explains. Referencing the emails between Gates to the Podesta group about the Centre’s funding, Sklansky says “that doesn’t look very good.”

Craig Holman, a lobbyist at the watchdog group Public Citizen, says he was once inclined to give Weber the benefit of the doubt that Manafort misled him about the true nature of the Ukraine lobbying campaign. But Holman raised another instance of incomplete registration, reported by BuzzFeed, in which Mercury did lobbying work on behalf of a group of Balkans countries through a little-known foundation that bore the signs of a front group.

“I did give Vin Weber and the Mercury Group a break, thinking maybe they were just deceived,” Holman says. “Once they did it a second time, I no longer believe that. Here Mercury Group is lobbying on behalf of this foreign entity, a nonprofit group that was clearly a front group for governments. … We had an almost identical second episode.”

The New York Times reports that both Mercury and the Podesta Group have been subpoenaed for records relating to their work for the Centre, so more information could be forthcoming.

“Now that it’s become a major national scandal, Mercury Group is in trouble,” Holman says. “It is going to be investigated more closely as to whether they’ve done this more often, whether it was complicit, knowing behavior. No doubt they’ll be interviewing Vin Weber to the same effect.”