“What have we done in the last five years, what will we do in the next five years, to make Minneapolis physically fit, structurally ready, for a population of 500,000?”

The question sounds familiar to anyone paying attention to Minneapolis policy conversations these days. Both outgoing Mayor Betsy Hodges and incoming Mayor Jacob Frey often espouse similar growth goals, and tensions around transportation, housing, and density have been on the front burner all over the city for years.

But if you didn’t notice the odd phrasing, you’d be surprised that the quote is from 100 years ago. It’s taken straight from the first chapter of the 1917 Plan of Minneapolis, the city’s first comprehensive plan that just celebrated its centennial with almost no notice.

Unlike the celebrations in Chicago when their first city plan had its centennial eight years back, few people care about the 1917 Plan of Minneapolis, because almost none of its recommendations ever got adopted. Immediately after it was approved, the United States found itself fighting World War I, and in Minnesota, an anti-German backlash went into full swing. Any civic momentum or funding for the new City Plan melted away. But looking back at the plan a century later, a few key themes resonate as much today as they did when they were first conceived.

I learned of the 1917 Plan around 10 years ago when the late Judith Martin, former head of the Minneapolis Planning Commission, showed me the copy kept at the University of Minnesota’s Urban Studies office. Martin was an instrumental voice for the redevelopment of the city’s riverfront during the 1990s and 2000. Unlike Chicago’s famous city plan, the Minneapolis plan did not envision a transformation of the industrial riverfront into public parks, instead pushing a network of “riverside drives.” But I believe that, for Martin, the plan served as a kind of inspiration for the riverfront revival. 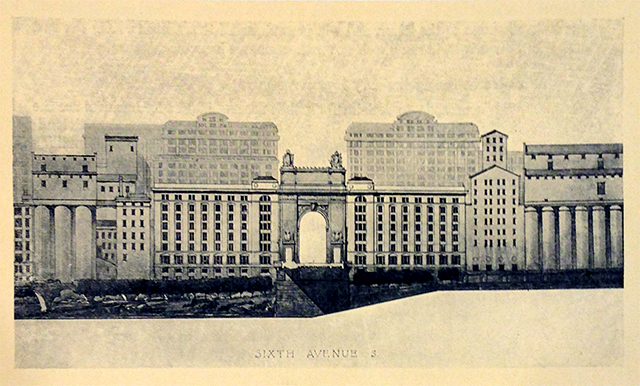 1917 Plan of Minneapolis
A detail of the proposed Minneapolis waterfront at 6th Avenue South.

When it was first printed, 1,000 copies were made, and today you can find copies of the plan in any of the city’s historical libraries. For example, I’ve perused versions in the Hennepin History Museum, the Downtown Central Library City Room, and the State Historical Society, and each time, paging through the thickly bound document was transportive. To my eyes, the document marks a watershed moment when Minneapolis leaders began to think publicly and holistically for the first time. Building on the success of the city’s emerging parks system, the 1917 plan linked together disparate issues like population growth, architecture, and transportation into a single unified vision of the city.

Technically speaking, the plan itself is transparently derivative, a self-proclaimed rip-off of Daniel Burnham’s groundbreaking 1909 Plan for Chicago. So close was the copy that the Minneapolis document even begins with Burnham’s famous “make no small plans” quote, and included his company on its team of consultants as well as a few renderings from the Burnhan plan’s famous artist, Jules Guérin.

(Burnham died in 1912, so it’s unlikely he did anything to forward the Minneapolis plan. In fact, because the plan took almost a decade to plan and produce, by the time it was released in 1917, no fewer than four of the original 11 committee members had died.)

Paging through the Minneapolis plan today, with 21st-century eyes, the first obvious difference is the language. The bombast, floridity and pretentious grandeur of the prose are far removed from the seemingly matter-of-fact world of modern urban planning. This was the era of Babbitt-esque boosterism and boomtown speculation, akin to today’s urbanizing China, and there were few limits to Minnesotan ambition.

Thus the plan is full of passages like this one, best read in an old-timey accent, which vacillates back and forth between optimism and dread:

Whether one belongs to that class that shuns or that seeks a vastly greater city, it is equally one’s duty to prepare for what the future holds in store for himself and his fellow-townsmen; if he would prefer a small city, he must nevertheless do his part in minimizing or preventing the evils of the greater city, and those evils can be better obviated by city planning than by any other method. If one is a believer in great cities, in “The City — Hope of Democracy,” his vision of the greater metropolis throws but the more glorious duty upon him. Whether we glory in it or not, equally we must prepare for a Metropolitan Minneapolis.

The aforementioned evils are presumably things like poverty, disease, and socialist revolution, but the passage gives a proper sense of the sense of responsibility one must have felt in the Minneapolis Club lounge, a century ago.

From this light, the defense of city planning is also interesting, as 1917 Minneapolis was not an era that had professionalized classes tasked with shaping the urban landscape. Back then, as in most cities, the office of the mayor was a patronage position. Civic government served as both an appendage of the industrialists who ran the city and as a mechanism of influence, and the civic reforms that eventually emerged to temper the opportunism of the industrial boom era had not yet taken firm hold.

The boulevards that never were

Perhaps the weirdest aspect to the 1917 plan is its insistence on the need for wide diagonal boulevards. Much like the idea of an “axial view,” wide boulevards formed the backbone of the plan’s take on City Beautiful-style urban design. The concept is based on the famous re-making of the Parisian street grid in the 1860s, where a city bureaucrat named Baron von Haussmann plowed wide axial streets through the congested heart of the old city. These boulevards were both social displacement and economic development strategy, and in both matters, were wildly successful.

It’s a bit bizarre to imagine Minneapolis with a similar set of wide boulevards, but that’s exactly what the Minneapolis plan envisions. The bulk of the document was written by  Andrew Wright Crawford, a Philadelphia architect and early planner, who I can only imagine was fed up with Philadelphia’s famously geometric street grid. As a result, the Minneapolis plan is heaped with praise for these new streets that, as Crawford describes them, would have almost miraculous effects.

One such boulevard, a widened Sixth Avenue, would have run from a large central civic square (south of today’s Hennepin County Government Center) diagonally to the Art Institute in Whittier. Others would have fanned out from downtown and connected the city in a web of monumentality. According to the theory, these streets would inspire citizens with their civic spaces, serve as fire barriers, solve congestion, and, through their width, prevent the city from becoming “infested by skyscrapers.” Aesthetically and economically, these streets and plazas were the heart of the plan. 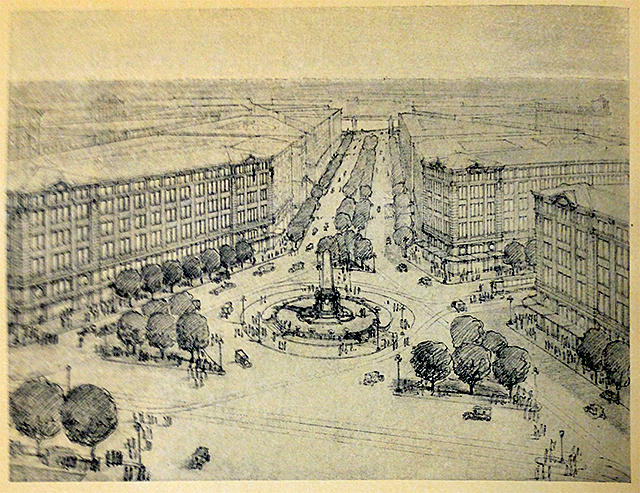 1917 Plan of Minneapolis
Aerial view of the proposed treatment of the intersection of Cedar Avenue, 15th Avenue South and Washington Avenue.

Walking through Elliot Park, Whittier, or the fringes of downtown today, it’s almost impossible to imagine the city with broad Parisian-style boulevards. The closest approximations might be Hennepin Avenue or Washington Avenues, and neither of those (yet) gives enough space to its sidewalks to resemble a proper European promenade.

Instead, probably the largest legacy of the now-forgotten 1917 Plan of Minneapolis is how much its moxie mirrors today’s conversations. The ease with which early 20th-century civic leaders took for granted its density and growth is something that has been missing for a long time in Minneapolis, for better and for worse. As the Depression took hold throughout the 1930s, followed by World War II and by a half-century of suburbanization and social evisceration of the core city, Minneapolis has rarely confronted the urban ambitions and anxieties that formed the fabric of Minneapolis life in 1917. That’s why it’s interesting, a century later, to see the city returning to an era where the tensions of growth, inequality, and large-scale leadership push the urban horizons outward and upward once more.