On Tuesday, Minnesota Department of Transportation officials showed off an autonomous shuttle bus they’re test driving at their facility near Albertville, northwest of the Twin Cities. They’ve affectionately nicknamed the vehicle, “Minnie,” an homage to Minnesota — and also to the bus’ stunted stature.

“Autonomous Vehicle Testing Area 15 mph,” a roadside sign told drivers of ordinary cars, as Minnie trundled passengers along, stopping at intersections, braking when pedestrians crossed its path and sometimes coming to a halt for no apparent reason at all.

“It was probably snow blowing across the road,” one of the demonstrators said.

Winter driving in Minnesota presents some challenges for the technology underpinning autonomous vehicles, much of it being developed by companies in temperate Silicon Valley, and tested in sunnier climes.

As autonomous vehicle technology moves from the realm of the Jetsons to become an inevitability, Minnesota transportation officials are keen to test it out. It’s important, they say, that conditions like snow, salt-caked cars and black ice are considered by both manufacturers and policymakers as cars start to drive themselves.

The bus MnDOT is testing, manufactured by French company EasyMile, has never been tried in Minnesota-like weather conditions, said Janelle Borgen, who works for WSB & Associates, a Minneapolis company MnDOT is working with to test the bus. In the coming months, MnDOT will put the shuttle through the paces of Minnesota driving conditions like snow-covered roads, blowing snow, ice and salt spray, sending a continuous stream of data back to EasyMile to help the company tweak its algorithms.

“One of the reasons we do this is because … as the state of Minnesota, we don’t want Florida, California, Arizona, Nevada telling the feds this is how it should be because here, it’s completely different,” said Michael Kronzer, a project manager for MnDOT’s Autonomous Shuttle Bus Pilot Project.

Without human eyes and ears at the steering wheel, autonomous vehicles rely on a combination of sensors and data to know where they are on the road — and what they’re sharing it with.

“Each system is a little different, but generally speaking, it’s a combination of LIDAR [light sensors] and cameras, and then a whole series of backup sensors that can do everything from detecting audio to trying to detect odors,” said Laura Fraade-Blanar, a postdoctoral fellow at RAND Corporation, a nonpartisan research organization.

To give the autonomous vehicles a model of the world in which they are operating, companies are developing maps that chart three dimensions of streetscapes. With the help of GPS, vehicles can plot their location within millimeters in these high-fidelity, 3D-mapped worlds. 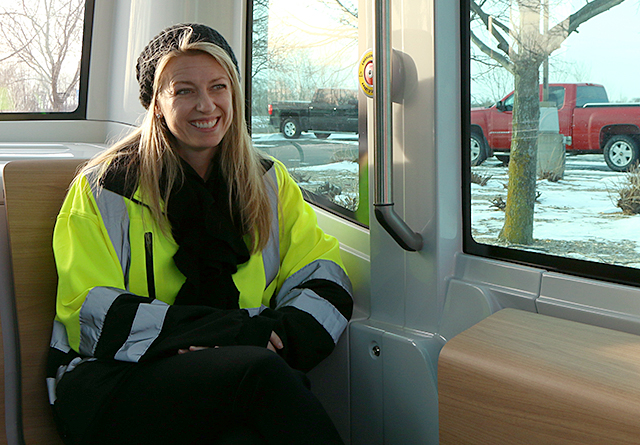 MinnPost photo by Greta Kaul
Janelle Borgen: “Our job is to test the limits and evolve the technology and understand how it works in our conditions.”

For now, Minnie isn’t operating in a 3D model of the world in quite the same way engineers envision driverless cars of the future will. Instead, testers pre-set a route and the shuttle uses GPS to finds its way.

Another bit of technology companies are outfitting autonomous vehicles with is LIDAR (which stands for light detection and ranging). It’s like radar, using pulses to measure ranges, but with lasers.

“Being an infrared laser, it doesn’t need any other ambient light to work. It’s illuminating the target around it with its own light, so it works in total darkness or sunlight,” said Greg McGuire, the director of the Mcity lab, an autonomous technology testing facility at the University of Michigan in Ann Arbor.

And then there’s cameras, which help cars see — and stay within — lines on the road.

The challenges of winter

That’s all well and good, until those lines are covered in a thick layer of snow. Winter driving conditions present unique challenges for autonomous vehicles — challenges that car companies and startups are working to solve, McGuire said.

There’s the problem of road salt. As any Minnesota driver knows, cars driven in winter conditions get crusty with salt and grime from the roads. This can block the sensors and cameras that help autonomous cars drive. 3M, which is working with MnDOT on the shuttle project, is helping to develop films that protect the sensors.

There’s also falling snow. LIDAR is a very sophisticated form of technology, but it can be foiled by precipitation. “Things that are reflective to infrared laser light will bounce the signal back,” McGuire said, denoting an obstacle. “Snow is a good reflector, it (reflects) almost all the light that strikes it, infrared or not, so it’s a very good reflector of LIDAR.”

The trick is redundancy, said MnDOT state traffic engineer Jay Hietpas — these vehicles have backup sensors so if one type of technology is struggling to handle road conditions, another can pick up the slack.

For the snow problem, there are other sensors car manufacturers can use: sonar, which uses sound, and radar, which works on radio waves, that have no trouble in the snow, McGuire said.

To his knowledge, McGuire said there isn’t really technology that can pick up on black ice yet, but that could be something current technology could detect with tweaks that teach it to read the different profile of signals bouncing back off of ice.

Especially critical in harsh weather conditions will be cars’ ability to communicate with one another, and the infrastructure itself, McGuire said: If there’s a slowdown a half-mile up the road due to bad weather conditions, inter-car communication through a wifi-like technology can help alert cars coming up on the traffic.

“Vehicles would broadcast their position … every 300 milliseconds. Cars around them could hear that and understand, they know where they are so they could work out if there were any potentially colliding paths,” he said.

And what about snow on the road? How will autonomous cars see the white and yellow lines on the road when they’re covered in snow?

Between the GPS, the sensors, the inter-car communication and the cameras, automated cars should be able to handle whatever comes their way, McGuire said — even snow.

“These are just engineering problems. There are always solutions to them,” he said. “A lot of the work that we do in Mcity goes beyond the engineering problems, and thinks about much more difficult things like social questions — the impact these questions would have on our society, the legal liability requirements, those sorts of things.”

The technology should have some time to catch up. The first stage of autonomous driving won’t likely be completely driverless.  Often bandied about is a scenario where cars are level 4 — “highly autonomous” — under many conditions between 2019 and 2021, depending on the manufacturer, Fraade-Blanar said.

The trick is teaching the cars to know when they’re out of their element, so to speak, at which point a human needs to take over.

At MnDOT’s testing facility, a snow-covered roadway hasn’t been too much of a problem for the shuttle bus. But a foot of snow? They don’t know yet, Hietpas said. Same with black ice and salt.

“Our job is to test the limits and evolve the technology and understand how it works in our conditions,” Borgen said as she rode along aboard Minnie on a trip across the Albertville test facility site.

The public will have the opportunity to check out the shuttle bus on Nicollet Avenue in Minneapolis in early February, during some of the events surrounding the Super Bowl.