Karen Clark is the longest-serving openly lesbian legislator in the nation, while Susan Allen was the first Native American woman elected to the Minnesota Legislature. On Friday, both pioneering Minneapolis representatives said they don’t plan to seek re-election to the Minnesota House in 2018.

“I got elected the same day as Ronald Reagan, by the way,” Clark, now serving her 19th term, said at a press conference announcing the two lawmakers’ retirements on Friday. “I was young and I thought we could change things overnight and that was a real wakeup call.”

Things didn’t change overnight, but throughout her 37 years in office, Clark was a champion of LGBTQ rights, authoring an amendment to the Minnesota Human Rights Act in 1993 that banned discrimination based on sexual orientation in employment and housing. In 2012, she led the campaign against a constitutional amendment to ban gay marriage, and the next year she authored the House bill to legalize gay marriage in Minnesota — efforts that led her to be recognized by President Barack Obama as a “Harvey Milk Champion of Change.”

Clark, who has a degree in nursing, also pushed numerous landmark health-related proposals, including a bill that required workplaces to inform its workers if they are exposed to toxic chemicals on the job. She also authored the first bill in Minnesota to require worker’s compensation in some sexual harassment cases.

The recent wave of sexual harassment allegations cropping up across the nation — and in the Minnesota Legislature — shows just how deep-seated the problem is, Clark said. “There’s resistance everywhere, and that’s very hopeful to me,” she said.

“It was never my intent to serve in the Legislature forever, but rather to answer a call to public service at a time when racial minorities were severely underrepresented,” Allen said. “Since that time, an increasing number of candidates from minority backgrounds have stepped up to run for public office at all levels of government.”

Allen was the first Native American woman elected to the Minnesota Legislature, the second lesbian elected to the statehouse and the first openly lesbian Native American woman elected in the nation. Since 2012, three more Native women have joined the ranks: Reps. Jamie Becker-Finn, Peggy Flanagan and Mary Kunesh-Podein. With Allen, they formed the state’s first-ever caucus of Native women, adding their names to more than a dozen bills that specifically tackled issues related to the American Indian community. Allen was also a founding member of the People of Color and Indigenous Caucus in the House.

“When I got here the Legislature was 98 percent white,” Allen said. “I wanted to be a voice for the people that were left out.” 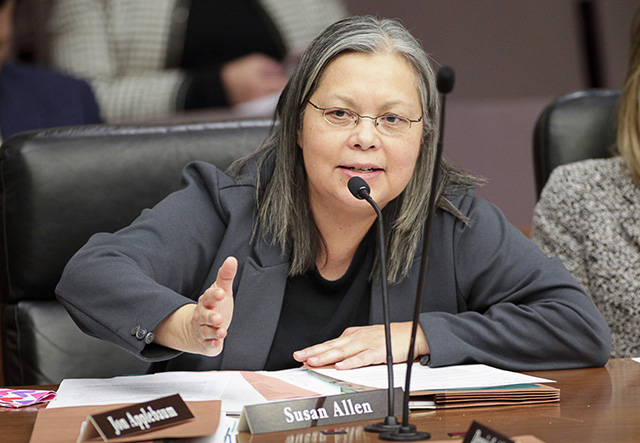 Their retirements leave two openings in diverse, heavily DFL districts in South Minneapolis, and candidates are jumping into the race. Three candidates are already running for Allen’s seat: Aisha Gomez, currently an aide for Minneapolis City Councilmember Alondra Cano, Ben Schweigert, who works as an assistant Hennepin County attorney, and Rebecca Gagnon, the Minneapolis School Board director and chair.

Clark and Allen said they still have work they want to do in the next legislative session, including passing a proposal to allow undocumented immigrants to obtain a driver’s license. But they’re both looking forward to spending more time with their families and leaving behind the time-consuming aspects of being a legislator. Clark was joined at the press conference by her wife Jacquelyn, who she’s been with for nearly 30 years. “We just don’t have enough time together,” Clark said. “You can look for me in my home.”