It was the spring of 2016 when Freeborn County officials decided to unpave what was once a two-mile asphalt stretch of highway southwest of Albert Lea.

Or, as county public works director Sue Miller puts it, a gravel truck decided for them.

The hauler broke up the surface on a stretch of County Highway 49 past the point of practical repair. It was during spring load restrictions when thaw softens the soil under roads and makes them more vulnerable to damage from heavy loads. Freeborn County’s rich soil is great for crops, not so much for roads.

“When the heavier loads go over it, especially during spring load restrictions when there’s no hard base … the tires crack it up,” Miller said — you get 10 to 15-inch chunks of asphalt popping out of the surface.

The county decided there wasn’t money in the budget to fix the pavement, so it sent a reclaimer to break up the asphalt and turn it into an unpaved road.

Freeborn County joins several Minnesota counties that have converted asphalt roads back to gravel in recent years, according to a 2016 report from the National Academies of Sciences, Engineering and Medicine’s Transportation Research Board.

And more counties may soon be joining them. As roads paved decades ago deteriorate past the critical stage and road maintenance budgets stagnate, unpaving looks like an increasingly economical — if initially unpopular — option.

There isn’t comprehensive data on how common road unpaving is. Since the prospect of turning roads to gravel often causes public outcry, it’s not something local governments are always eager to talk about.

Across the U.S., the Transportation Research Board’s report found nearly 70 projects by local, state and federal agencies in 27 states that unpaved 550 miles of road. The report isn’t comprehensive; it’s based on surveys of local governments that had the option to respond or not. In Minnesota, seven counties detailed unpaving projects they were considering or had already undertaken — Clearwater, Dodge, Freeborn, Mahnomen, Norman, Jackson and St. Louis.

Laura Fay, research scientist at the Western  Transportation Institute at Montana State University who worked on the report, said that while unpaving roads isn’t a huge part of pavement management, she was surprised to find how common the practice is.

Roads that were candidates for unpaving tended to be rural, deteriorating and saw less than 150 vehicles travel over them in an average day.

Though she doesn’t have data on it, Fay said she gets the sense unpaving roads is becoming more common, as many roads become too expensive for roads departments to maintain.

“Funding to local road programs is not really increasing, but the cost of maintaining them is,” Fay said.

In light of their findings, the researchers are developing a guide to help local officials decide when it’s safe and cost-effective to unpave roads, and how to best do it.

“We need transportation investment on the federal level and on the state level,” Miller, of Freeborn County, said. “That’s what our farm economy rides on, and if we want to be sustainable with our economy down here, we need those roads.”

Of the roads that have been unpaved in Minnesota, some are funded with the help of the state, while others are maintained with local tax levies. Regardless, the decision to unpave was, in most cases, the result of county transportation budgets stretched thin over too many miles of highway, county engineers said, putting low-traffic country roads at low priority levels for pavement maintenance. 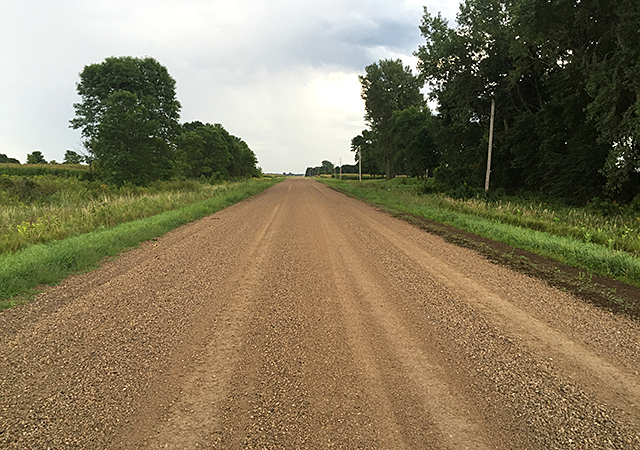 Lawmakers have struggled to agree on a way to fund transportation in Minnesota. Last year, the legislature passed a measure that injected funding into transportation, but critics say the deal — which didn’t dedicate any new revenue for transit projects — fell short of what’s needed to maintain the state’s infrastructure.

“It’s been fairly flat funding. It has not kept up with inflation,” said Mahnomen County Engineer Jonathan Large, who oversaw the conversion of a two-mile stretch of County Road 15, a low-traffic road, to unpaved surface in 2012.

“We’re not able to do any kind of what I would call improvements to the roadways,” he said — widening shoulders or flattening the slopes off the sides. “We’re not able to widen them like we’d like to for safety, we have to just work on the surface.”

Also at issue, Large said, is that the state is turning roads in its trunk highway system over to counties whose road budgets are already stretched thin.

“There’s more roads and more miles that are having to be funded with the same amount of money,” he said.

Large said he hopes to see the legislature improve funding in a steady fashion.

For a three-mile stretch like this, County Engineer Guy Kohlnhofer said he has three options: One, resurface the road for about $700,000. Two, grind the asphalt into aggregate and leave the stretch unpaved in one shot for about $50,000.

And then there’s a third option: Dodge County is gradually unpaving the road, as the potholes become too pronounced. Kohnlhofer estimates the county’s about a third of the way done unpaving the stretch, one piece at a time.

Like many paved rural roads, County Road 6 was paved in the ’70s, when asphalt was a lot cheaper. It was overlayed in the 1990s, when asphalt cost about a third of what it does today, Kohnlhofer said.

There are a handful of houses on the road, and he hasn’t heard a complaint, he said. With average daily traffic of less than 100 cars per day, now that there’s a road — one that receives state aid — a mile away.

“It’s a road that wouldn’t be paved today because we have much higher priorities,” he said.

That was a common refrain among county engineers. Many of the roads that were unpaved in recent years were paved in the 1970s. Today, they said, the roads would never have been paved in the first place.

Jackson County, in southwestern Minnesota, unpaved a two-mile stretch of road in 2012 that was no longer seeing much traffic after another road more-or-less replaced it. Nobody lived on the road, and once highway department officials explained the case for unpaving it to city officials, the decision was made, said County Engineer Tim Stahl.

But it’s the priority roads that worry county engineers.

Kohlnhofer said when he started as a county engineer 20 years ago, it wasn’t uncommon to have a big construction project, say the reconstruction of 3-6 miles of road, going on every year to every-other-year.

Three years ago, Dodge County reconstructed a road using federal funds, but “I don’t picture reconstructing another stretch of road until I retire, and I’m only 53,” he said.

Far from undertaking big maintenance projects, the county’s focus has become much more narrow — namely, maintaining the center 24 feet of roads, because of limited funds, says Kohlnhofer. That would be fine, if everyone stayed inside the white lines, but there’s deer and ice and other unforeseen obstacles, he said.

“If you go off the shoulder, they’re steep, you may roll off,” he said.

And then there’s the gravel roads that shouldn’t be gravel roads, Kohnlhofer said, like a township road in Dodge County that about 1,000 cars travel every day.

“It’s more expensive yearly to maintain a gravel road with high traffic, the problem is coming up with the initial $350,00o to $4o0,000 a mile to pave it upfront,” he said.

No engineer wants to unpave a road, Miller said. It’s a reduction in the level of service to everyone who uses it, plus, with the cost of adding gravel and grading, it’s often more expensive long-term — it just doesn’t require the same kind of up-front investment that building or doing a big maintenance project on asphalt does. But when you’re county is running $5 to $ 6 million dollars short per year just to take care of pavement, you start looking at unpaving as an option, Miller said.

Miller said Freeborn County — with a lot of miles in its road system relative to the number of residents — is hoping it doesn’t have to unpave more roads down the line.

Jackson County, too, but it might be too late.

“I’ve told legislators it’s already too late for some roads … even with an improvement in funding I don’t think we can turn the corner on unpaving roads,” Stahl said.