It’s been nearly three months since two Minnesota legislators announced they would resign amid allegations they sexually harassed multiple women. But at the Minnesota Capitol, the debate on how to fix a culture of sexual harassment in state politics is just getting started.

Lawmakers went back to work last week, meeting together for the first time since former Republican Rep. Tony Cornish and former DFL Sen. Dan Schoen stepped down late last year. Shortly after convening, all 134 members of the House attended a first-ever mandatory discrimination and sexual harassment training, and on Monday, a committee met to begin the process of looking at the Legislature’s sexual harassment policies and where they could be lacking.

It will be a highly scrutinized debate this session, as lawmakers try to find some kind of meaningful way to grapple with an issue that has been unaddressed for decades — in a place where relationships are often marked by vast power imbalances and where there isn’t a formal system for punishing the most powerful group of people in the building: sitting legislators.

Lawmakers must also look into the lack of reporting options for people who don’t technically work for the Legislature but still spend their days there, including lobbyists, journalists, and members of the public.

“I don’t know at this time what the end result is, but we are going to look at policies, rules and legislative avenues with the end goal of making the House a safer more respectful work environment,” Republican House Majority Leader Joyce Peppin said during the first meeting of a subcommittee tasked with looking at workplace safety and harassment issues this session on Monday.

Yet some at the Capitol, particularly those who have come forward with their own stories of harassment, are already worried that the Legislature won’t really tackle the problem — that many lawmakers are more interested in looking like they’re addressing sexual harassment at the Capitol than actually doing something about it.

In a hearing in the House on Monday, legislative researcher Ben Weeks held up the House of Representatives current discrimination and sexual harassment policy: a sparse, 12-page booklet. “I would just urge everybody to read through it,” he said. “Read it and familiarize yourself with it.”

That was after a detailed presentation on the policy, which includes a wide range of options available if someone on staff is credibly accused of sexual harassment. They can be transferred to a different department, for example, or given a written or oral reprimand. They can also be suspended from work, or even fired. But when it comes to a member of the Legislature, things are different: the issue will be dealt with directly by House leadership.

From there, members of the leadership are required to report any instances of harassment to House human resources, which must conduct an investigation. But even if a case of harassment is found to be substantiated, there are few options available for reprimanding the member. As Kelly Knight, the human resources director of the House, said Monday: “I do not have the authority to discipline members.”

If enough lawmakers feel a legislator should leave because of behavior, they must take their complaint to the House or Senate ethics committees, which can then put in motion a movie to expel the member. But even then, expulsion takes a two-thirds majority in both chambers.

Legislatures across the nation are grappling with the issue in the wake of the #MeToo movement, which encouraged women and men to share their stories of sexual harassment. At Monday’s hearing at the Capitol, Jonathan Griffin, with the National Conference of State Legislatures, said 11 states have proposed changes to their policies since allegations began surfacing.

In Illinois, lawmakers have created an anonymous hotline for people to report instances of sexual harassment in state politics. In New York, a senator has introduced a bill to make it a misdemeanor, or a crime of “official misconduct,” for legislators with substantiated cases of sexual harassment. 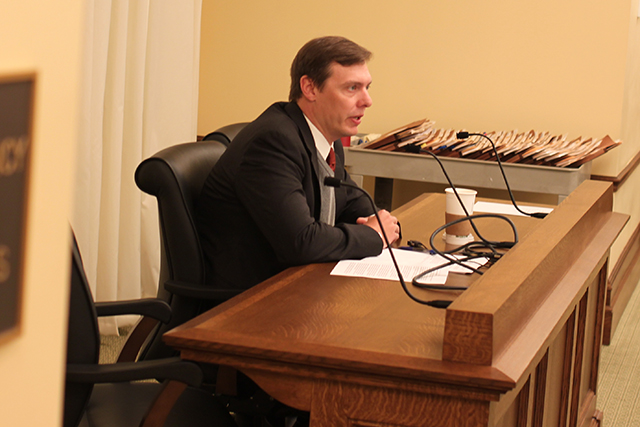 MinnPost photo by Briana Bierschbach
Jonathan Griffin from the National Conference of State Legislatures: “A good policy should not apply to just not just legislatures and legislative staff, but also apply to third parties who conduct business in the legislature.”

“One thing that’s been universally true throughout all of the policies that we’ve looked at is that no two are unique,” Griffin said. “There isn’t a uniform policy, there isn’t a cookie cutter way to do this. Each one seems to be uniquely formulated by the Legislature in order to best serve their employees and their constituents.”

In Minnesota, the House and Senate sexual harassment policies also have no way of handling allegations of harassment made by or against people who aren’t technically employees of the Legislature — lobbyists, reporters, vendors or members of the public — but who still spend a lot of time at the Capitol. There’s also no specificity in the policy about harassment that takes place off Capitol grounds or not directly related to legislative business. Sarah Walker, one of the women whose decision to talk about experiencing harassment by Cornish led to his resignation, is a Capitol lobbyist.

“A good policy should not apply to just not just legislatures and legislative staff,” Griffin said, “but also apply to third parties who conduct business in the legislature.”

Several members of the House DFL caucus walked out at the end of the all-House training last week, including DFL Rep. Erin Maye Quade, who came forward about experiencing harassment from both Cornish and Schoen. Maye Quade and others felt the focus of the sexual harassment portion of the training, conducted by defense attorney Linda Holstein, was not to show legislators what a respectful work environment looks like and curb problematic behaviors.

Instead, it seemed to be more concerned with the viewpoint of someone accused of harassment, they said, and put the onus on people being harassed to tell their colleagues when their behavior is inappropriate.

“What is the point of the training if not to get people to modify their behavior and to make things improve?” said Rep. Jamie Becker-Finn, DFL-Roseville. “You are not going to solve everything and prevent everything, but you can do things to prevent some of it, and it seemed like that was not the point or the desired outcome. It felt like it was about checking a box.”

Under currently policy, Minnesota House members are required to take sexual harassment training when they first come to the Legislature, but many haven’t done any additional training since their first year. Doing trainings more regularly is part of the discussion, Peppin said.

State senators also take sexual harassment training right after they are elected, and are also required to take the training once every five years after they are elected. Like the House, the Senate is also evaluating their policies, which haven’t been updated since the 1990s. Last week, several senators were going through their mandatory training cycle with Therese Pautz, who works with employment investigative firm NeuVest. She has been conducting in the training in the Senate since 2003.

Pautz said she takes a different approach to her training sessions, focusing on teaching legislators to “self monitor, versus waiting for someone to tell someone that it’s not OK,” she said. “They’re not going to do that because of that power differential.”

“I would be very careful that we don’t blame or shame the person that is being targeted,” she added. “There is still that self-monitoring that we can all do.”

DFL House Minority Leader Melissa Hortman said convening an outside task force comprised of employment, human resources and other experts picked by legislators in both parties would be more effective process than legislators determining their own policies. That idea was first recommended by Becker-Finn, Maye Quade and former DFL candidate Lindsey Port, who was one of women who spoke out about her experience with sexual harassment.

“There is a tidal shift in the country with how this issue is being dealt with,” Hortman said. “The norms are changing around this issue and they are changing extremely rapidly. We are changing form a workplace where women adjusted to male dominated environment to fit in, to young women asking the question: ‘Why should we change ourselves, why don’t we change the circumstances within which we work?’”

At the Capitol, Minnesota lawmakers grapple with addressing sexual harassment — at the Capitol