It was 16 degrees outside — and three days before the city was to host Super Bowl 52 — but on a recent Thursday night in Minneapolis, two dozen people still battled traffic and packed into a community room in the Temple Israel in Uptown.

The event had nothing to do with football, but it was a pregame of sorts. “Is anybody here training to go to their first caucus ever?” Carin Mrotz, director of Jewish Community Action, asked the group. More than half the hands in the room shot up into the air.

They were all gathered for training on Minnesota precinct caucuses, which are happening across the state on Tuesday evening.

Minnesota is one of 13 states that still holds caucuses, which are essentially community meetings organized by the major political parties. The word caucus actually means “group,” and the idea is to gather politically like-minded individuals to cast ballots for preferred candidates and select the people who will go to the major parties’ endorsing conventions and set the party platform.

That process is particularly important this year. There’s an open race for governor, and three other statewide constitutional offices, the entire Minnesota House, all eight congressional seats, and both of the state’s U.S. Senate seats are also on the ballot. This year, the precinct caucuses will also include a preference poll for the Republican and Democratic candidates for governor, which will offer an early indicator of who’s leading in the race.

“With Super Bowl week here, what could be lost in all of this is the fact that we have these very import precinct caucuses right around the corner,” DFL Party Chairman Ken Martin said. “The 2018 election is a critical election in the state.”

‘Showing up’ is half the battle

For the uninitiated, attending a precinct caucus can be intimidating. Ron Aminzade, who attended the caucus training on Thursday, hadn’t been to a precinct caucus in more than 20 years. He was motivated to get out by all the major races on the Minnesota ballot, he said, but also the administration of Republican President Donald Trump. “I’m part of the resistance,” he said. “I hope this election is a turning point.”

To help explain the caucus process, organizers of the training, which included Take Action Minnesota, handed out a 10-page packet with answers to frequently asked questions. There are plenty of things caucus-goers need to remember about the process.

Precinct caucuses are usually held on the first Tuesday in February in an election year, though party chairs can agree to a different date if they want. Attendees don’t need to be registered to vote in the upcoming election to attend a caucus, but they do need to live in the district (you can find your local caucus location here). Minnesotans don’t register by political parties, but caucus attendees must attest that they’ve voted for their party’s nominee in past elections and intend to do so in the future. The doors open for registration at 6:30 p.m., with voting for governor starting promptly at 7 p.m.

The power at precinct caucuses comes in being present: There’s no absentee balloting in the caucus process for those who can’t make it. “We are one of the few states where, by simply showing up, you can be an influencer in your group,” said Metropolitan State Social Science Professor Matthew Filner, who has been doing caucus trainings for more than a decade. 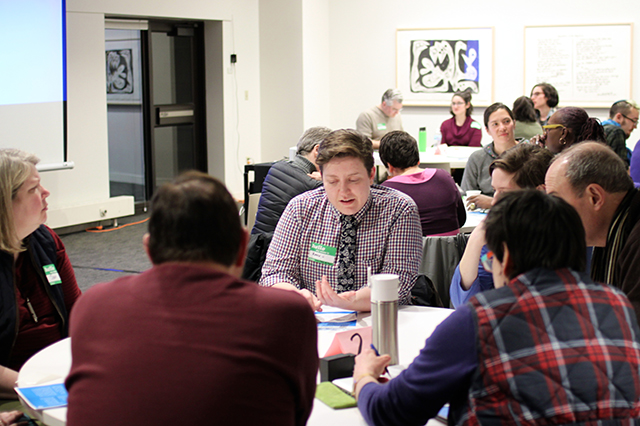 MinnPost photo by Briana Bierschbach
Minnesota is one of 13 states that still holds caucuses, which are essentially community meetings organized by the major political parties.

Those who show up can offer motions to the party’s platform, which are the main principles that party leaders and activists follow. They can also be elected a delegate to the subsequent endorsing convention for both parties, where they play an outsized role in picking the party’s nominee for the governor’s race, U.S. Senate and other statewide offices.

The people who show up to caucuses can also become party of their party’s leadership. Republican Party Chair Jennifer Carnahan attended her first-ever precinct caucus in 2016, ahead of the presidential election. A year later, she won a competitive race to be the next chair of the party, a rapid ascent that wouldn’t have happened if she didn’t decide to attend precinct caucuses, she said.

“It really is the opportunity for every day citizens to get involved in the parties and have a say in who our candidates will be, who our party leaders will be and the platforms that exist for both parties.”

The caucus process isn’t loved by everyone. Minnesota’s 2016 March caucuses drew scrutiny when voter interest due to the presidential race shattered turnout expectations. Some locations were unprepared for the long lines and traffic, which ended up streaming around the high schools and community centers where caucuses were taking place. That prompted lawmakers to change the law later that year to switch Minnesota to a primary state for the presidential race. Starting in 2020, state voters will head to a primary to pick their preferred presidential candidate instead of attending caucuses.

But top party leaders fought to keep the caucus process in place for local elections, in part because of the role they play in mobilizing hundreds of thousands of activists across the state, who also take part in establishing the party’s platform. Others like the neighborly aspects of holding a caucus, which actually require people to gather, while going to vote in a primary is a mostly solitary affair. Minnesota now has a hybrid system, with caucuses held in midterm elections and for local races and a primary for the presidential race.

Martin isn’t expecting turnout to surpass the 207,000 who showed up at caucuses two years ago, but he does expect there to be more interest this year than there was during the last midterm election in 2014. That’s in part, he said, because of the number of races on the ballot in Minnesota this fall, but also because of the groups that have emerged to resist Trump.

“There are a lot of people coming out of the woodwork, a whole new set of activists who have never been engaged before,” he said.

The results of the caucus gubernatorial preference poll are not binding: DFL and GOP governor candidates must still earn the party’s endorsement at the political conventions this summer, and that person must also prevail in a primary election in August to get to the general election. But the winners of the straw polls on Tuesday will head into that part of the campaign season with a percieved boost, Martin said.

Attorney General Lori Swanson’s decision to not run for governor, which would have signaled a competitive primary race, has also put more pressure on the six other Democrats in the race to clinch the nomination, Martin added. Top candidates on caucus night could end up with more delegates at the endorsing convention. “With Lori out there’s a question mark as to whether a primary is necessary at this point,” he said.

Carnahan agrees. There’s no clear frontrunner on the crowded GOP side of the race, with former Republican Party Chairman Keith Downey and Hennepin County Commissioner Jeff Johnson leading a group of more than a dozen candidates. 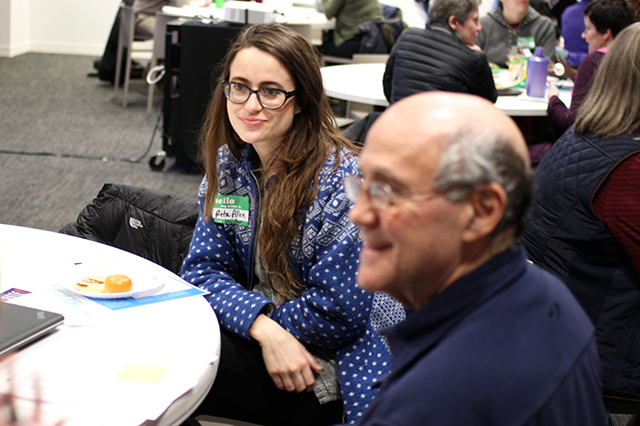 MinnPost photo by Briana Bierschbach
To help explain the caucus process, organizers of the training handed out a 10-page packet with answers to frequently asked questions.

But there’s already been controversy surrounding the caucuses. Republican state Reps. Kathy Lohmer, R-Stillwater, and Cindy Pugh, R-Chanhassen, recently posted to Facebook that a friend had attended a caucus training at a mosque and warned that there was a plot to “mobilize Muslims to infiltrate our Republican caucuses on Feb. 6.” The comments earned a swift rebuke from Democrats, and Carnahan released a statement that caucus-goers from all faiths are welcome in the Republican Party.

Mrotz, addressing the group attending training Thursday, said participants shouldn’t be discouraged from showing up to caucuses because of what happened. “There are folks for whom rooms of progressive people getting ready to engage in democracy is really threatening,” Mrotz said.

Why Minnesota’s caucuses are so important this year