Ted Matthews drove past acres of fields, racing to meet with a farmer who called threatening to kill himself.

That’s when he got a call from another farmer in a different part of the state who was also threatening suicide. Since he couldn’t be in two places at once, he frantically got on his phone to try to find someone else who could help the second farmer.

Matthews might have the toughest job in the state of Minnesota. As the lone rural mental health counselor for the entire state employed by the Department of Agriculture, he gets 15 calls on a slow day and as many as 40 calls on a busy day. “People constantly talk to me about suicide,” he said.

He has worked alone for more than two decades, but there is now a proposal being considered by legislators this year to increase the number of people fielding calls from farmers and others in crisis by 100 percent — in other words, there would be a total of two full-time rural health counselors, including Matthews.

It’s greatly needed, said Matthews and others who testified before the Minnesota House Agriculture Finance Committee on Tuesday. Nationally, farmers have endured a 50 percent drop in net farm income over the last three years, the largest three-year drop since the start of the Great Depression. And there’s no relief in sight: according to an annual report from the University of Minnesota Extension and Minnesota State system, 2017 was another year of thin profits for farmers in the state. Roughly one-third of farmers lost net worth last year, and dairy farmers were hit the hardest, with prices for milk plunging in the second half of the year.

For farmers and those who work with farmers every day, it feels a lot like the farm crisis of the 1980s, when inflation, massive debt and high interest rates forced thousands of farmers out of work.

According to the Census, there are roughly 100,000 farmers in Minnesota, and the most recent downturn has taken a toll on those individuals. A 2016 study by the Centers for Disease Control and Prevention found people working in agriculture-related jobs take their lives at a rate five times higher than the general population.

Legislators and Gov. Mark Dayton are considering a number of proposals to tackle the problem this year. Dayton proposed $200,000 in his budget to add another full-time mental health counselor through the Minnesota State system, as well as increase education and outreach about options for farmers in crisis. A bipartisan group of legislators are proposing funding for more mental health counseling options for individuals and families in rural parts of the state, including a proposal from Rep. Jeanne Poppe that’s similar to Dayton’s, transfering $140,000 to the Minnesota State system to add more health counseling support. She’s also authoring a bill to offer a $100,000 grant to the Farmers’ Legal Action Group, which provides legal aid to farmers struggling with finances or other issues.

“This isn’t the 1980s, but it’s very similar,” Poppe, DFL-Austin, said Tuesday as she presented her proposals.

It’s not just financial struggles affecting farmers, according to the farmers and advocates who testified in committee on Tuesday. The physical pain from the arduous work of farming can take its toll, and in some far-flung rural areas, farmers don’t have great access to the health care they need. In some cases, farm culture dictates anyone with physical or mental conditions should suck it up and get back to work.

Brad Schloesser, dean of agriculture for the Southern Minnesota Center of Agriculture, said the farming lifestyle is also isolating and solitary, and in their small, close-knit communities, farmers are often worried about how they are perceived by others. That can affect their willingness to seek out help in a public place like a mental health center. 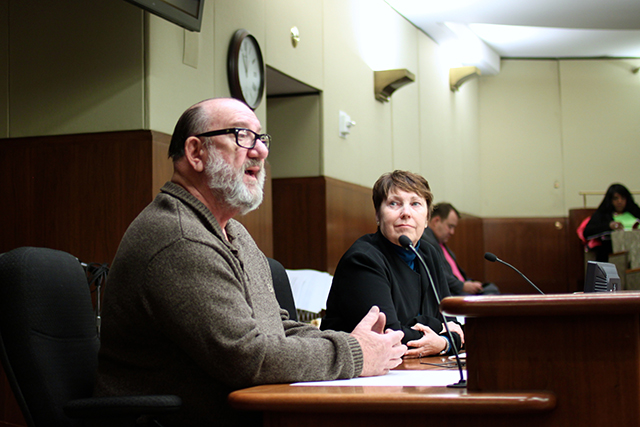 “We are proud individuals, often solitary,” Schloesser said. “[Farmers are] often not the type of people to drive their pickup truck to a place that would identify them to their neighbors as someone who is struggling.”

As the only rural mental health counselor working currently, Matthews keeps his cellphone number posted online, and usually the calls are anonymous. He doesn’t take down names, but lets the caller know that he might check back with them down the road to make sure they are OK. The calls can last five to 20 minutes, and if it gets to that point, he will travel from his home base of Hutchinson, Minnesota, and meet families in person.

There’s no charge for his services — that’s covered by the state — but he’s often not making any diagnosis, either. He’s just there to listen and answer any questions.

“When a farmer calls me they never say anything except, ‘Hi, Ted,’” Matthews said. “Everyone identifies me as Ted, [they don’t ask about my] credentials or [offer] thoughts about those credentials because that makes them uncomfortable.”

More than having an extra counselor working to field calls, Matthews would prefer a situation where he’s not rushing across the state to help someone in the middle of a breakdown. Matthews wants more resources put into training people who work with farmers to recognize signs of depression. The state also recently started a hotline for farmers to call if they are dealing with stress and suicidal thoughts.

“All farmers have lots of stress — it’s a matter of lowering it,” he said. “The idea is not to find people who are really depressed and help them out of that. That is obviously a goal if they are in that position, but the idea is to have a lower stress and lower depression by working with them far, far ahead of those issues.”

Minnesota is considering doubling its number of rural mental health counselors. To two.