Hardly a week goes by when someone doesn’t ask Soren Jensen the question:

“When are you going to extend the Greenway over the river with that bridge?”

That bridge would be what railroaders call the Short Line Bridge, which crosses from the end of the Midtown Greenway — the 5.5-mile biking and walking trail built on a former railroad corridor that crosses south Minneapolis — to the Prospect Park neighborhood and on into St. Paul.

Jensen, the executive director of the Midtown Greenway Coalition, had an answer, just not a very satisfying one.

“For several years I’d just say, ‘Well, we’re kinda waiting on the railroad.’” While right-of-way for the Greenway is in public hands, the one for the bridge is not. And any interest its owner, the Canadian Pacific Railway, once had in selling it seems to have faded as the bridge continues to service a few customers along Hiawatha Avenue in Minneapolis.

Now, as the Greenway approaches the river, hikers and bikers must veer off and join West River Parkway. To make the trip to the east bank, those on bikes must get to paths on multi-use bridges at Franklin Avenue or Lake Street.

Jensen and other advocates for expanding biking options in both Minneapolis and St. Paul want to change that. And while that could be a long process with economic and political hurdles, they want to get started.

To that end, the coalition is in the midst of a crowdfunding campaign to commission an engineering study of the bridge to understand what it would take to bring it up to standards. That might either be for a shared rail-bike-pedestrian bridge or as a bike-pedestrian crossing only. Such a study could also potentially renew interest in the bridge from the Hennepin County Regional Rail Authority and Hennepin County, both of which passed up an opportunity to take control of the bridge a decade ago.

Both options would require a willing partner, which could be a problem.

“The Short Line bridge in South Minneapolis is an active railway bridge and sees regular moves of freight trains,” said Canadian Pacific media relations manager Andy Cummings. “While we don’t have a formal proposal to respond to, we would have serious concerns about allowing cycling on the bridge.” 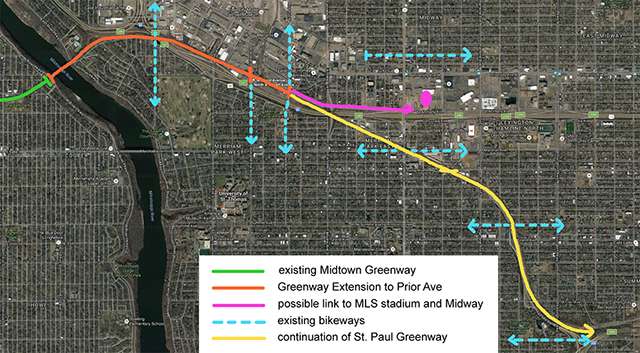 Courtesy of Andy Singer
Click to view a larger version.

Jensen isn’t deterred. With an engineering study in hand, he hopes to convince players like Hennepin and Ramsey counties to get involved. Again. He’s attracted a coalition of 35 cycling, outdoors and neighborhood groups to support the effort. Thanks to individual donations, including a single $10,000 gift, there is enough money pledged to pay for the engineering work.

Additional funds will be spent trying to support trail development on the St. Paul side and on better connections between the Greenway and Minnehaha Falls dubbed the Min\Hi Line. There have been several meetings on both sides of the river and in both cities to talk about the campaign to extend the Greenway, he said.

Jensen said he hopes to unveil the results of the engineering study later this year in St. Paul. “In some ways people in St. Paul are almost more excited about this,” he said. “Everyone is excited, but we’re getting a lot of enthusiasm from St. Paul.”

He summarized the issue like this: “We have one of the best, if not the best, urban bike trails in the nation. But it’s got this missing link. We’re trying to revive this idea of pushing forward. I know people are excited about it. But it remains a challenging project because the railroad is still using the bridge.” 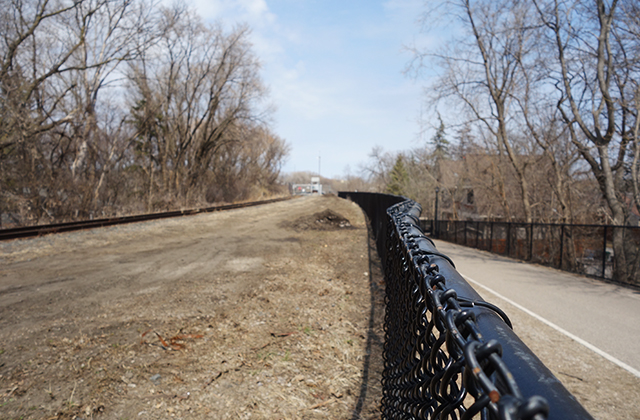 MinnPost photo by Peter Callaghan
A short chain link fence separates the end of the Midtown Greenway trail from Canadian Pacific tracks that cross over the Mississippi River to the East Bank.

Rail service over the bridge consists of one round trip per weekday to supply an ADM grain operation and a metal recycler. Jensen said those uses might not be around forever. Hennepin County bought out and relocated other businesses near Hiawatha for construction of the Blue Line, he said. And there is potential for sharing a restored bridge if they remain.

“What if we could shore up that bridge, rehab that bridge? Obviously we’d have to go out and find a lot of state and county and federal funding,” Jensen asked. “What if it could be made so structurally sound that Hennepin County would be willing to take it on? What is the price tag for that? We’re hoping to get an answer to that from the engineering study.”

Andy Singer is the co-chair of the St. Paul Bicycle Coalition as well as a writer and cartoonist on urban design and cycling issues for streets.mn. That has led him to study the issues surrounding the Short Line bridge and the rights of way on both the east and west banks of the river. 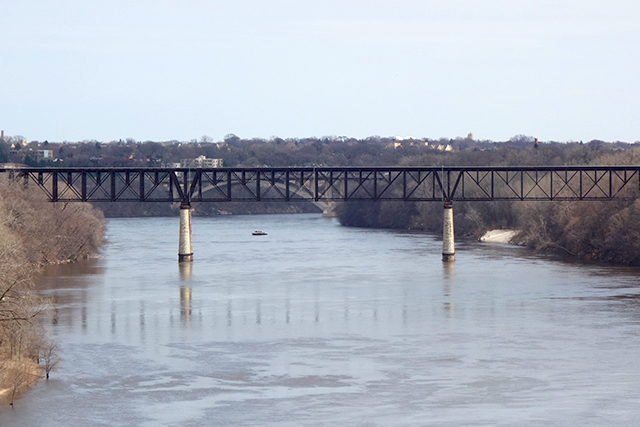 MinnPost photo by Peter Callaghan
The Short Line Bridge from the Franklin Avenue Bridge. The bridge was built in 1880 and rebuilt in 1902.

Singer said that in 2006, Hennepin County commissioned an engineering study by URS Corp. to give advice on whether the county should assume ownership of the bridge. Such a transfer would have required the county to assume legal liability for bridge use by both rail customers and bikers and walkers. The study came up with different ways to accommodate a single rail track and a pedestrian/bike path. But in the end it recommended that the bridge was in such structural distress that the county not accept the offer of taking over the bridge.

Using the piers already in the river to support a new bridge would require abandonment of the rail line, the study said. And building a new bike-pedestrian bridge likely would not be acceptable to the National Park Service that operates the Mississippi National River and Recreation Area.

Singer said he is well aware of the hurdles. But he thinks the benefits to the region are enough to keep exploring options. Bike commuters, for example, need a direct and safer route from the west bank to the east bank. And the potential for expanding bike trails in St. Paul on right of way now controlled by Canadian Pacific are significant.

For example, once on the east bank of the river, the right of way swings upriver into Prospect Park in Minneapolis and down river toward Cleveland Avenue and Ayd Mill Road in St. Paul. Such future uses are in the St. Paul comprehensive plan as well as neighborhood plans. 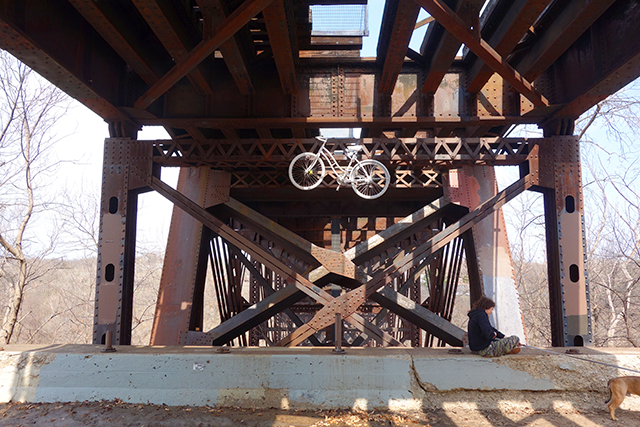 MinnPost photo by Peter Callaghan
A ghost bike hangs from the superstructure of the Short Line Bridge where it passes over W. River Parkway in Minneapolis.

“It’s been in those plans for a decade or more but nothing has happened with it,” Singer said. “We kind of feel like somebody’s got to nudge this forward.

“I just think it would be safer, nicer on many different levels,” he said. “The goal is to make it easier for people to bike and get more people biking.”

Is it the right time to extend the Greenway across the river to St. Paul?