Mysti Babineau’s mother went missing when she was 2 years old.

The police never found her. Babineau, a member of the Red Lake Nation in Minnesota, was thrust into the foster care system. She was raped when she was 9, and when she was a middle schooler she was attacked with a knife, giving her a scar she still bears on her shoulder today.

When she was 20, Babineau went missing herself. She was kidnapped in Isanti and brought to St. Paul, where she was raped and beaten. She believes she would have stayed missing or been found murdered if she hadn’t managed to escape from her assailants.

Babineau recalled those episodes between tears Wednesday morning in front of the Minnesota House Public Safety Policy and Finance Committee, concluding with what might have been the most remarkable part of her experience: “My story is not rare,” she said. “Many of my sisters and many of my relations go through this … and oftentimes when we do speak up and when we do speak out we are not heard.”

Babineau and others were there to tell their stories as part of an effort to pass a bill that would create a task force on missing and murdered Native American women in Minnesota. Despite making up less than 1 percent of the Minnesota population — there are around 28,000 Native American women and girls in Minnesota, according to the American Community Survey — Native women in the state are murdered at far higher rates than the national average, said Mary Kunesh-Podein, DFL-New Brighton, a member of the Standing Rock Lakota tribe and the author of the bill. Between 1990 and 2016, the homicide rate for Native women in Minnesota was seven times that of white women, according to the Minnesota Department of Health.

“It’s a devastating reality that our Native American women are going missing and murdered in some of the most violent ways,” Kunesh-Podein said.

It’s the first time the idea for such a task force has been brought to the Legislature, and so far it’s garnered bipartisan support. The bill is moving through committees in the House, though it doesn’t have a companion proposal in the Senate, and is being considered for possible inclusion in a broader House public safety proposal this year. The task force would cost less than $200,000 for the first two years and report annually to the Legislature, according to the House DFL Caucus.

If passed, the task force would take a big-picture look at the issue of missing and murdered Native women, including investigation and prosecution patterns, child welfare policies and coroners’ findings.

When her daughter’s body was found — she had been shot in the chest — she still had her  Minnesota ID on her, with Morrison’s Minneapolis address listed. Still, she never got a call from the medical examiner — or anyone — before her daughter was buried in “pauper’s grave” in Illinois, she said. “We were able to bring her home and give her a proper burial December 28, 2008,” Morrison said. “She went missing August 6, 1996.”

The task force would also look at the systemic causes and underlying factors that explain why higher levels of violence occur against Native women and girls. A 2016 National Institute of Justice report found that more than 84 percent of Native women experience violence at some point in their life.

The proposal would also look at options for collecting data on missing and murdered Native women, which isn’t currently tracked in any comprehensive way, Kunesh-Podein said. Other states are looking into the issue too, including Washington, where Democratic Gov. Jay Inslee recently signed a law directing the state patrol to study how to increase reporting and investigations in cases of missing Native women.

This is by no means a new problem, Rep. Jamie Becker-Finn, DFL-Roseville, said Wednesday. Becker-Finn, who grew up on the Leech Lake Reservation, said her great grandmother went missing in 1931. Her body was eventually found, but to this day her family has no idea what happened to her. “It dates back to first contact with Native communities and colonizers,” she said. 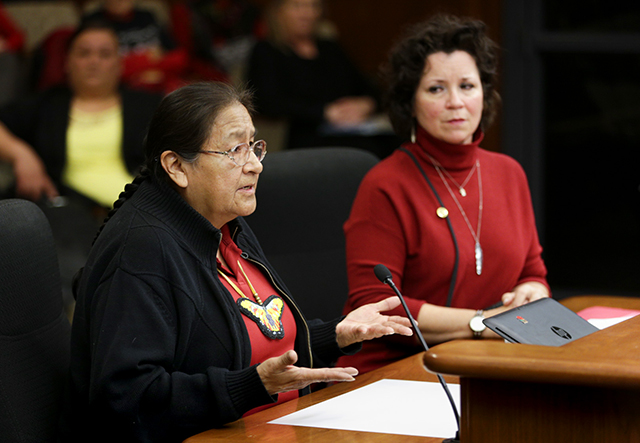 House Public Information Services
Willamette Morrison, part of the Red Lake Nation, said that when her daughter went missing in 1996, Morrison was told she couldn’t file a missing persons report because her daughter was an adult.

Becker-Finn brought up a comparison for her colleagues to consider. Most people who lived in Minnesota in 2003 remember the disappearance of Dru Sjodin, a Minnesota student who was abducted from a mall parking lot in North Dakota, where she was going to college. Quickly after learning she was missing, law enforcement officials across two states teamed up to try to find her. Sjodin’s face appeared on nightly newscasts, with the media dubbing her “everyone’s daughter, everyone’s sister.” Sjodin’s body was eventually found in a ravine outside Crookston. She had been sexually assaulted.

“When she went missing the activation of the community, by the media, by law enforcement, everyone was looking for her,” Becker-Finn said.

That wasn’t necessarily the case for Savannah LaFontaine-Greywind, a 22-year-old pregnant Native woman who went missing from her apartment in Fargo, North Dakota last August. Her disappearance “wasn’t on the news right away,” Becker-Finn said.

Eight days later, her body was found floating in the river near Moorhead, Minnesota, wrapped in plastic and duct tape. Later, police would find her child alive inside the apartment building she vanished from. Eventually, Brooke Lynn Crews, a neighbor from the third floor in the apartment building, pleaded guilty to conspiring to murder Greywind and kidnap her unborn child. Only then did the story become national news.

“It’s painful to think about what might have gone differently,” Becker-Finn said, “if the community was activated in the same way to find her.”