Gov. Mark Dayton did what he threatened to do. He just did it sooner than expected.

On Wednesday, just three days after receiving the two bills that contained most of the work product of the 2018 Minnesota legislative session — a tax conformity bill and an omnibus budget bill — the DFL governor announced that he had vetoed the measures.

“I said all this before,” Dayton said as he began his press conference to announce the move. His reasoning: Both bills were too big; they included policy that shouldn’t be in them; and they didn’t address his priorities in ways he wanted them addressed, in that the tax bill helped the rich more than the poor and that the Legislature’s response to the emergency school funding proposal Dayton had requested was a sham.

And while Dayton said he regrets that many people in the state who would have benefited from items in the bills won’t get the help they need, he also said the Legislature left him no choice. “This failure is their responsibility,” Dayton said. “I know they won’t take responsibility for it, but it’s theirs.”

Asked about Minnesotans who see this as a governmental failure, not just a legislative failure, Dayton, who is not seeking another term, quipped: “They don’t have to vote for me.”

He then said it is a failure of his and a failure of the Legislature before noting something he’s said before: that this session was worse than previous sessions that had similar political distribution of power. “Divided government has not worked well for Minnesota, but it’s worked better than it did this time.”

‘I’m embarrassed by this governor’

“In the end, it feels impulsive. It feels vindictive. And it didn’t help anybody in Minnesota,” Gazelka said. “I was hoping he would take that extra time even to just let the emotions of this whole conflict settle down a bit. There’s a lot of punching and counterpunching. It is the way it happens in divided government. And then you get to the end and the dust settles and you sit back a little bit and you look at the bills and you look at who does this help and who does this hurt — not who wins and who loses.”

House Speaker Kurt Daudt, R-Crown, said he was “extremely disappointed” in the governor’s decisions. “There are a lot of people who are going to be hurt by this,” Daudt said. “It’s a staggering list of people. I’m not even going to read it. I think everyone is going to ask why? I’m actually to the point where I’m embarrassed by this governor.”

Daudt said he would not ask Dayton to call a special session — something the governor has already ruled out — but said he’d show up if one is called. “The people who are hurt need to ask him,” Daudt said. 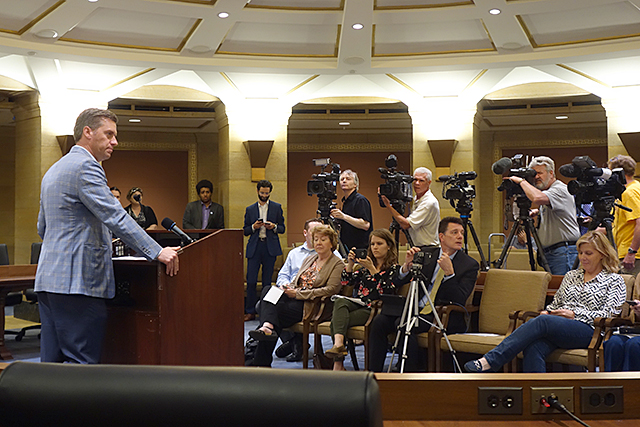 MinnPost photo by Peter Callaghan
House Speaker Kurt Daudt: “There are a lot of people who are going to be hurt by this.”

Daudt dismissed suggestions that House and Senate leaders forced Dayton’s hand by putting many provisions into just two bills. He said they’d tried to send the governor stand-alone bills, such as one that provided cash to private deputy registrars hurt by the failed computer system of the state licensing agency, MNLARS. That one was too small, Daudt said the Legislature was told, because it didn’t also include more money to fix the system.

Yes, Dayton had said it all before. Repeatedly. But driven either by politics or unbridled optimism, GOP leadership kept saying they thought that, in the end, the governor would sign them after all; that there was enough there that the governor liked. And Daudt and Gazelka repeated how they had removed dozens of items from both bills that Dayton wanted removed.

“In the end, part of it was about running out of time, and part of it was we wanted a bill that had so many good things in it — with a few minor policy provisions, when you look at them — that we thought he’d sign it,” Gazelka said.

“I really thought that when he looked at what was in these bills that he would sign them. But he didn’t look. He had his mind made up,” Daudt said.

Now, the only hope left for legislators to claim an accomplishment is the bonding bill, which pays for repairs and new construction for state, local and nonprofit facilities. Dayton said he will act on that and the other remaining bills by Friday.

Much more than budget and tax bills

The shorthand for the two bills Dayton vetoed — the budget and tax bills — contained much more than their name suggests. The budget measure, also known as the mega-omnibus bill, appropriated only about $150 million in new spending on top of the $46 billion two-year state budget adopted last year. Much of the bulk was the contents of dozens of policy bills that didn’t come to a vote separately but were set aside for inclusion in what became a 989-page, 3-inch thick document.

The tax conformity bill was intended to reconcile Minnesota’s income tax code with changes made in Congress late last year. Absent such changes, many state taxpayers will likely pay more, while tax filing will also be made more complex. But the bill contained more than just conformity measures, including many other tax-related provisions. After Dayton vetoed a nearly identical tax bill a week ago, the House and Senate GOP included their version of emergency school funding in the same bill.

Over the weekend, Dayton said he expected to take most of the 14 days allowed by the state Constitution to review the bills. That contributed to the surprise of Wednesday’s announcement. Dayton said the schedule changed because of a campaign by Republicans to build pressure from groups they said benefited from the bills.

Most of those gatherings were done in or around the Capitol. One, which was to feature disabled residents and their caregivers, was scheduled for later Wednesday.

“I noticed there was posturing going on outside about  how I could be persuaded,” Dayton said. “Legislators could have persuaded me last week if they’d been willing to engage in serious negotiations.” 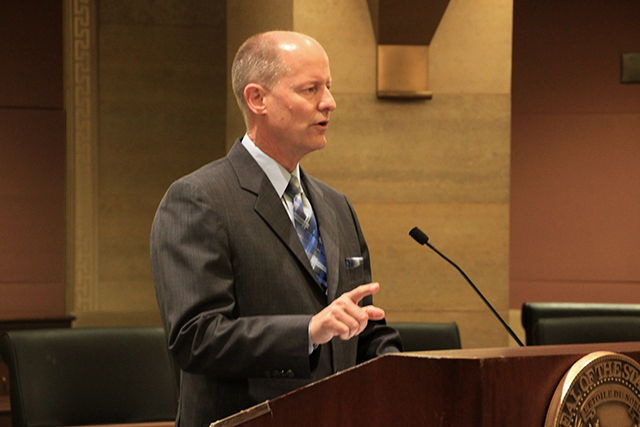 In addition to blaming Republicans, Dayton blamed politics. “This session was never about working out agreements with me,” he said. “It was about laying out a re-election template and the money to carry it out.”

In addition to blaming Dayton, Senate and House Republican leaders blamed politics. “Minnesotans will be hurt because he chose politics over people,” Daudt said. “The reality is the governor was never going to sign these bills.”

So apparently it’s about politics.

“That’s what he wanted to create in an election year, that somehow this session was a failure,” Daudt said.

So if both sides’ rhetoric is to be believed, neither the governor nor the GOP legislative leaders ever intended for anything of substance to be passed into law this session. It was all a rather long and expensive prelude to the fall campaign season, when a new governor will be elected and party control of the House will be decided.

‘This is not normal’

Reaction to Dayton’s session-gutting act depended almost exclusively on which political tribe one belonged to.

It was hard to find Republicans who would say that Republicans might have egged Dayton on by ladling so much  into two giant bills. The calculation was this year — as in past years — that the best way to GOP priorities signed was to combine them in a bill that contained stuff Dayton both wanted or needed.

The tax bill, for example, included cash and fund shifts to produce up to $225 million for school districts facing budget and staff cuts. (More detail on the school funding plan that Dayton dubbed “fake” is here.) Meanwhile, the mega-omnibus included money for opioid education and treatment; changes to the oversight of elder care facilities; money for deputy registrars; and money for school safety improvements.

If you want those items, the GOP seemed to be telling Dayton, sign both bills so we get some things we want.

Dayton has long complained about such tactics. But it has worked before, and recently. In 2017, he was forced to accept a passel of spending bills despite disliking much of what had been placed inside them. His resentment over the move was one of the motivations for his line-item veto of the Legislature’s own budget last year — and his demand that they’d need to rethink a half-dozen items he was especially unhappy with if they wanted to money back. It didn’t work out the way he wanted, even if Dayton did win the court battle over the legality of using the Legislature’s budget to pressure action.

It was just as hard — OK, impossible — to find Democrats who would say that the vetoes weren’t worth it, that they will deny Minnesotans of tax relief; force at least 50 school school districts to contemplate teacher layoffs; and deny people who care for the disabled a a pay raise.

“It’s Legislature 101,” said DFL Sen. Susan Kent at a St. Paul Area Chamber of Commerce panel Wednesday. “If you want get your bill passed you’ve got to work with all the stakeholders …. We’ve all watched ‘School House Rock,’” we know how this works.”

“The governor made it very clear,” Kent continued. “He was not going to support the bills that carried things he was not okay with. Our Republican leaders had an opportunity to do things that could get passed, but they chose to take a different path.”

At the same panel, Rep. Matt Dean, a Dellwood Republican who was a candidate for governor before dropping out earlier this year, said the one job of the session was to make the tax fixes, which the government failed to do. “There’s one thing you can’t screw up and this is it. And we didn’t do it,” Dean said. “For that I would like to say I am sorry. And I am sick and tired of trying to pretend that this stuff is normal. Because this is not normal.”

Erin Hinrichs contributed to the reporting of this story.

The 2018 session of the Minnesota Legislature was a failure. But whose failure was it?