Lowry Grove, a mobile home park just a stone’s throw from Northeast Minneapolis in St. Anthony, was once home to more than 90 families.

They moved out last year, after the park’s owner sold the land to a developer. Now there’s not much there: overgrown grass, a broken bird bath, some structures — though most are gone.

In their place, the St. Anthony City Council has approved as many as 430 market-rate, senior and assisted living units.

Advocates say mobile home parks — where people rent land for factory-built homes that they own — are an important and unsubsidized source of affordable housing for low and very-low income people for whom home ownership might otherwise be unattainable: One in Shoreview listed for sale at $39,900 has two bedrooms, two bathrooms, central air, a storage shed, a deck and monthly rent of $520, in addition to $200 in utilities and $250 in property taxes per month.

Eighty-one metro area mobile home parks house about 37,000 people, or more than 1 percent of the area’s population, according to the Metropolitan Council.

But the number of places where such housing is available is shrinking as parks like Lowry Grove close. Since 1991, 12 mobile home parks in the Twin Cities have shuttered.

Not only are they closing, leaving some of the region’s more vulnerable residents to find new housing options, but they’re also not opening: not a single new mobile home park has been built in the Twin Cities metro area since 1991.

Mobile homes are often referred to as naturally-occurring affordable housing: because they’re less expensive than conventional homes and are not generally subsidized.

But for all its relative affordability, this type of housing comes with uncertainty.

In some cases, the term “mobile home” is a misnomer — while these homes are built in factories and designed to be trucked to their location, many of them can’t really be moved once they’re installed. Older units can be too fragile to move, and compared to, say, the ’70s, mobile homes today are much bigger. They have decks and other additions that tie them to the ground they sit on.  Other times, moving them can be prohibitively expensive — costing as much as $5,000 to move across the street or more than the home is worth to move farther away, said Tory Clark, who works with Northcountry Cooperative Foundation, a nonprofit that helps mobile home park residents buy parks.

The Twin Cities have seen marked decline in the number of occupied mobile homes since the early 2000s, according to data from the Metropolitan Council. The area has lost parks even as existing parks expand, said Freya Thamman, who researches manufactured housing at the Met Council.

In a time when property values are high, advocates for manufactured home park residents want to preserve the parks so that residents — many vulnerable to begin with — aren’t in danger of losing their homes.

Ed Goetz, the director of the University of Minnesota’s Center for Urban and Regional Affairs, is studying what happens to residents of Lowry Grove after their move away from the park.

“A number of people moved to other mobile home parks — those were the ones lucky enough to have manufactured homes that could be moved. Other folks, families have split up and people have moved away from the region or moved out of the Twin Cities. Other people went through periods of homelessness afterwards, so there’s a wide range of experiences,” he said.

The people who live in mobile homes, on average, are poorer and more diverse than the general population. The median income of mobile home owners in 2015 was $40,000 — less than half that of homeowners in the metro, according to a Met Council report.

That report also found that, compared to 25 percent of metro area residents, 39 percent of mobile home park residents are people of color.

Today, many parks have aging infrastructure, and as metro area property values rise, the land could sometimes be used for more lucrative purposes.

“It’s worth more as a townhouse or apartment building than it is as a going venture,” said Warren Kramer, the executive director of the Northcountry Cooperative Foundation.

Many trailer parks were built in the 1950s, the ’60s and the ’70s, when vacant land was more plentiful and there was less stigma attached to them.

They took off as a matter of practicality in post-World War II America.

“In 1946 some 6 million Americans were hunting for apartments and houses while doubling up with family and friends. Industrialists compensated, setting a production record of 600,000 mobile homes in 1947,” according to a report on mobile homes from Boise State University.

Advertisements for the parks pitched amenities like pools, gardens and grilling with the nextdoor neighbors. Many buyers were veterans and their families, who prized the economy: a mobile home was a third to half the cost of a conventional house, and often served as a stepping stone to one, according to the Boise State report. 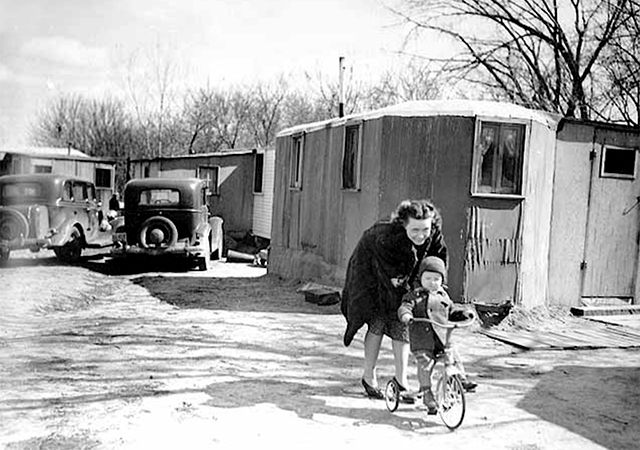 Courtesy of the Minnesota Historical Society
A mother with her child on a tricycle at a trailer home park in the Twin Cities area, circa 1940.

But there’s also a stigma attached to mobile home parks, as they’re often portrayed as dens of drugs and domestic violence, home to stereotypical “trailer trash.” City councils and neighbors are apt to favor other types of development.

“In a lot of places, they are not looked upon favorably by nearby property owners,” Goetz said.

Signs at the edge of Park Plaza Cooperative, a park with more than 80 homes in Fridley, proclaim to passers-by that this community is resident-owned.

In 2011, Park Place joined a movement gaining traction nationally and in Minnesota: resident ownership of manufactured home parks. Instead of the parks being sold to an investor, Northcountry Cooperative Foundation’s Kramer said, this enables residents to own them as a co-op, which then governs them.

Nationally, efforts to bring parks under resident ownership have picked up as an alliance of nonprofits has helped organize and finance deals.

Northcountry has helped residents of eight parks in Minnesota and two in Wisconsin gain ownership of their parks, among them Park Plaza.

Kramer said Northcountry was in talks with the owner of Lowry Grove to sell the park to its residents, who were also interested, but said the park, which ultimately sold for $6 million, would have required $3 million in infrastructure work — more than they were able to corral in resources.

Generally, rents increase $30 to $40 per month initially when residents buy parks, as residents pony up for a down payment. But over time, resident-owned parks safeguard against steep rent increases that can be associated with parks owned as investments, Kramer said.

“Over time, these communities are better managed under resident ownership. The people who live in them have more income because their lot rents aren’t going up. They get to know their neighbors because they’re working together,” he said. 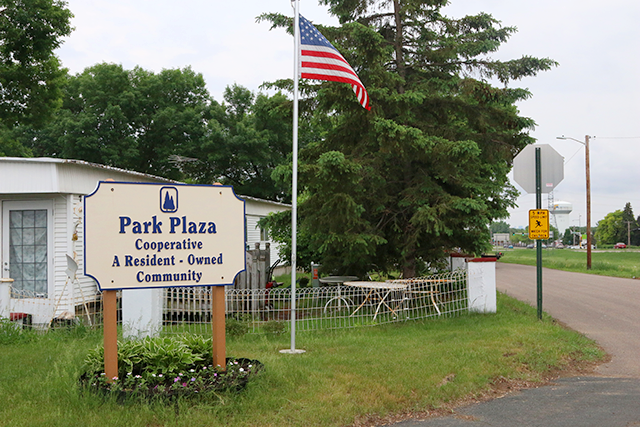 MinnPost photo by Greta Kaul
Signs at the edge of Park Plaza Cooperative, a park with more than 80 homes in Fridley, proclaim to passers-by that this community is resident-owned.

In Minnesota, manufactured home park owners who intend to close the the park are legally obligated to sell to residents if they match an offer by another party.

Activists are working on other fronts, too, namely at the legislature, where this year several provisions having to do with manufactured home parks were vetoed with the omnibus supplemental appropriations bill, including changes to the state manufactured home relocation trust fund, which helps pay to move mobile homes when parks close and requiring the Minnesota Department of Health to report data, including names and addresses of parks, annually, among other things.

Preserving manufactured home parks means preserving opportunities to their largey low-income residents that other neighborhoods might not, Thamman said. In the metro area, they tend to be located near jobs and transit, in good school districts.

“The areas where manufactured home parks are located, really these areas have a lot of access to opportunity,” Thamman said.