A week before the primary election, Carla Nelson was walking down a residential street in Owatonna, knocking on doors and asking people for their votes on August 14.

That she wore a red polo shirt with the words “Carla Nelson for Congress” on it helped: “I know who you are,” said more than one person upon opening the door. Nelson’s campaign mailers, which seemed to have made it into the mailboxes of most homes in this quiet neighborhood of single-family homes and barking dogs, had apparently done their jobs.

A few Owatonna residents told her she already had their support, and Nelson — an eight-year veteran of the state Senate and a former school teacher — would smile and tell them she would treasure their vote on election day.

That’s no lie: Nelson is locked in a tough and, at times, bitter and personal primary fight against Jim Hagedorn, the Republican Party’s endorsed candidate who is making his fourth run for the 1st Congressional District seat, which spans an area of southern Minnesota from Winona to Worthington.

Hagedorn and Nelson have both mounted strong efforts: they have each raised the funds necessary needed to compete, and each has an impressive list of endorsements from politicians, activists, and outside groups that they are using to make their respective cases.

Republican primary races elsewhere in the country have tended to revolve around Donald Trump, with candidates deemed insufficiently supportive of the president earning a challenger.

Though Hagedorn touts his early fealty to the president — and points out Nelson’s more moderate record in St. Paul — the two candidates are not offering markedly different agendas to CD1 voters in the run-up to the primary. Each is vocally backing Trump, touting his economic agenda along with conservative orthodoxy on abortion and guns.

The central issue in this primary is the general election in November — and which candidate is best-positioned to win in this Republican-leaning district that has sent a Democrat to Congress for the past decade.

To hear her tell it, Nelson is in the race because she has the skills and profile to prevail over the DFL opponent — and Hagedorn doesn’t. Hagedorn, meanwhile, argues that he came close to winning this seat in 2016, and has put in the work needed to flip the seat to GOP control in a year when Republicans are looking for every pickup opportunity they can get.

Hagedorn hopes 2018 is the year

At the Mower County Fair in Austin, Hagedorn stood next to a cardboard cut-out of a grinning President Trump and shook hands with passers-by at the Republican Party’s booth, chatting with them about their summers and, in one case, a woman’s plans to visit the White House with hopes of meeting Trump in the flesh.

To many loyal Republican voters in CD1, Hagedorn is a fixture: the 56-year old, who lives in the Faribault County town of Blue Earth, has been running for this congressional seat for years. In 2010, Hagedorn made a bid for the GOP endorsement and fell short; in 2014, he won a contested primary and went on to lose to DFL Rep. Tim Walz by nine points; and in 2016, Hagedorn came very close to knocking off Walz, losing by less than one point as Trump carried the district by 15.

This time’s the charm, Hagedorn says: With Walz vacating the seat to run for governor, and with former Barack Obama administration official Dan Feehan poised to pick up the DFL banner, the Republican says that it’s his time to capture the seat.

“We’ve been working so hard for a very long period of time,” said Hagedorn, who decided to run again the day after he lost to Walz in 2016. “I think everyone pretty much knows who we are.” At the CD1 GOP’s endorsing convention, Hagedorn won the party’s backing on the first ballot — with 76 percent of the vote. 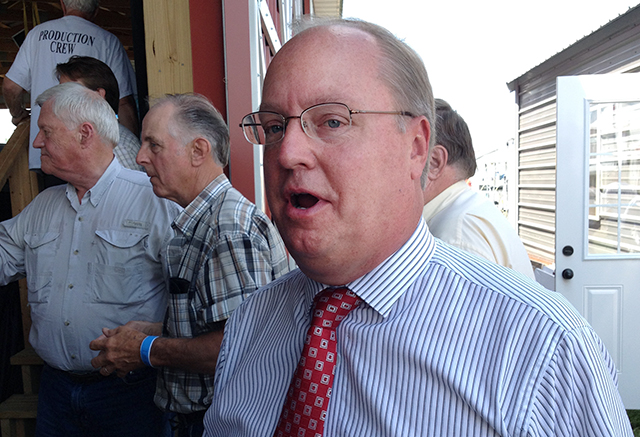 Hagedorn says the only thing missing in his 2016 run was money. That’s no longer an issue: as of the end of July, Hagedorn had raised twice as much money as he did during his entire 2016 run. He boasts new advantages on his side this time around: broad support from Republicans in and outside of the district, and a stronger campaign organization. (David FitzSimmons, a former state representative and chief of staff to GOP Rep. Tom Emmer, was brought on as campaign manager last year.)

If Hagedorn has all the ingredients for a win in place — and had spent the better part of eight years courting Republicans in the 1st — why did Nelson get into the race?

“This is a primary about who can win the general election,” said Nelson, sitting down at a Jimmy John’s in Owatonna as her young field staff enjoyed sandwiches after a morning of door-knocking. “I know the stakes are so great that we must capture this congressional seat, and the majority in the U.S. House is in the balance.”

Everyone knows that Hagedorn would lose in a general election contest to Feehan, Nelson argued. “If you cannot win when your president wins with a 15 percent margin,” she said of Hagedorn’s 2016 bid, “you are not going to win an off-year election.”

Nelson was first elected to Senate District 26, which encompasses downtown Rochester and points south and east in Olmsted County, in 2012, with 56 percent of the vote. In 2016, she defeated DFL challenger Rich Wright with 56 percent — outperforming, she’s quick to note, both Trump and Hagedorn. “I have a history of winning elections, tough elections,” she said.

In the nine months that both Hagedorn and Nelson have been running in the primary, both have advanced staunchly conservative, pro-Trump platforms. However, there are some political and policy differences between the two — differences that Hagedorn has been eager to note.

On several issues, such as immigration and the transgender bathroom bill in the legislature, Hagedorn pointed to Nelson’s record to brand her as a moderate who is out of step with the conservative heart of the district. “She’s got a very soft record as far as being a conservative,” he said of his opponent.

Hagedorn also accused Nelson of being insufficiently supportive of the president. Though Nelson introduces herself to voters by saying she supports Trump’s “make America great agenda,” in an October 2016 article in the Rochester Post-Bulletin, Nelson did not commit to voting for Trump. (“People notice that,” Hagedorn says.)

Hagedorn, meanwhile, staked out Trumpian positions before Trump did, like on immigration: in 2015, Hagedorn wrote a Star Tribune op-ed in which he called for a pause in refugee resettlement, citing terror recruitment in Minnesota. (Later, candidate Trump would call for that pause until officials “can figure out what the hell is going on.”)

In interviews, both Hagedorn and Nelson were eager to take shots at one another, calling into question each other’s backgrounds and fitness for office.

Nelson touts at every turn her three decades in southern Minnesota — and Hagedorn’s long career as a federal bureaucrat in Washington. (A mailer drawn up by Nelson’s allies points out Hagedorn “isn’t from here” and “cares more about himself than serving Minnesota.”)

“He’s only talked about things,” Nelson says of Hagedorn. “We’re very different in how we talk,” she added, referring to her opponent’s history as a blogger — nom de plume “Mr. Conservative” — who made demeaning comments about women, including calling two Democratic U.S. senators “undeserving bimbos.” (He has since apologized for the posts.) “We don’t need that type of representation in Washington, D.C.,” Nelson said.

Hagedorn, meanwhile, often notes he is the only candidate who was born in the district; he also adds his grandparents and great-grandparents are all buried in the Blue Earth town cemetery.

He pointed out that he’s earned the endorsement of 13 sitting state legislators, including six of Nelson’s colleagues in the Senate. “Her colleagues, the people who know her best, for whatever reason are supporting me, so that’s a good indication,” Hagedorn said.

Preparing for the general

Hagedorn has, after multiple runs for Congress, locked up a significant amount of support in the 1st District. His website lists the backing of current and former CD1 Republican Party chairs, as well as the chairs or co-chairs of the party units of 18 of the district’s 21 counties.

In a Republican primary — in which the most plugged-in voters are participating — Hagedorn’s institutional support and name recognition from his previous runs could be a boost. Several Republicans familiar with the district who discussed the race with MinnPost said these factors make Hagedorn a favorite for Tuesday’s election.

But these Republicans also note that Nelson has mounted a strong challenge. (A consulting firm advising her on the race was responsible for guiding now-Rep. Karen Handel to victory in an expensive and closely-watched special election against Democrat Jon Ossoff in Georgia’s 6th District.) Nelson has raised nearly $450,000, and has earned endorsements from national conservative organizations — most notably, the National Rifle Association, whose stamp of approval is featured prominently on Nelson’s campaign literature.

The state senator and her backers say this endorsement, and others, reflect uneasiness with handing Hagedorn the baton for the general election. “The fact that they [endorsed] before the primary says volumes about the importance of this race,” she says. “It’s an indication that I’m the candidate that can and will win this seat.”

Nelson says that officials at the House Republicans’ campaign arm, the National Republican Congressional Committee, encouraged her to run this cycle. (Maddie Anderson, a spokesperson for the NRCC, said “Carla and Jim are both great candidates. And the NRCC encourages all great candidates to run… We will happily support whoever comes out of the primary.”)

Both candidates plan to be active in the run-up to the primary: Hagedorn is planning to swing through all the district’s counties to get out the vote, while Nelson will continue to pound the pavement and knock on doors to get across the finish line.

“We’re ready to go,” Hagedorn says. “She’s not well known across the district and hasn’t done the work. We’ve been building this up and working really hard.”

That work, Hagedorn says, will position him to beat Feehan, who is expected to be a formidable opponent: he has already raised over $1.1 million and has the enthusiastic backing of national Democratic groups who plan to spend big to keep CD1 in their hands as they seek to recapture control of the House.

Whichever Republican prevails on Tuesday will have a fight ahead of them. Hagedorn says he offers a “clear choice” and will be a “conservative reinforcement” for Trump in the House.

Nelson says she’s never backed down from a fight. “People are tired of bloggers who just talk,” Nelson said. “They want to know what you have done and how have you served me, and I’m going to run on that. I’ll run just as hard, harder, in the general than in the primary.”

The GOP primary in Minnesota’s 1st Congressional District isn’t about Trump. It’s about who can win in November.