For a new generation of political activists who came of age after the 1990s, the term “progressive Republican” must sound like an oxymoron. But this now extinct strain of Republicanism did, in fact, represent the mainstream of Minnesota’s GOP at an earlier time. A new book by Dave Durenberger with Lori Sturdevant, “When Republicans Were Progressive,” recounts the rise and fall of a political movement in Minnesota that eventually succumbed to the onslaught of the far right. 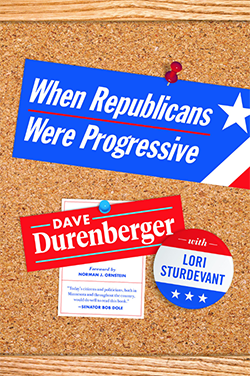 Durenberger, a former U.S. senator, traces the origins of his party’s progressive tilt back to the election of Harold Stassen as Minnesota’s governor in 1938. Known as the boy governor, Stassen took office when he was only 31. The charismatic young Republican ended eight years of the left-leaning Farmer Labor party’s hold on the state’s highest office. But Durenberger tells us that Stassen did not intend to reverse the Farmer Labor party’s expansionist policies, aligned with the Roosevelt administration’ New Deal. Instead, Stassen implied that he would achieve many of the Farmer Laborites’ aims but do so more efficiently and with more transparency.

Stassen’s landslide victory in 1938 initiated a period of progressive Republican ascendancy in Minnesota extending well into the postwar era. During the next three decades, Republicans in the mold of Stassen occupied the governor’s office for all but eight of those years. After Stassen, notable progressive Republican governors included Luther Youngdahl, who oversaw the reform of the state’s mental institutions, and Elmer L. Andersen, who actively supported the passage of Minnesota’s landmark fair housing act.

Durenberger clearly views himself within the Stassen progressive tradition. That tradition, he explains, “stood not for big or small government but for effective government. It prized government not for its own sake but as a practical tool for creating the conditions that allowed its citizens to thrive. … It nurtured a sense of responsibility for the common good in both citizens and elected officials. It provided keen competition for other political parties while respecting its rivals’ contribution to the whole. It held that working across the aisle as well as across the country was a mark of strength, not weakness or disloyalty.”

Durenberger got his start in politics as an aide to Harold LeVander, a Stassen Republican who was elected governor in 1966. LeVander has been Stassen’s partner in a South St. Paul law firm. Later, the future Republican governor would offer Durenberger a job in the firm as a young associate when Durenberger graduated from the University of Minnesota Law School in 1959.

After working as an attorney and a Republican activist for more than 20 years, Durenberger got his chance to face the voters for the first time in 1978, That year, he had initially intended to run for governor, but soon discovered that Minnesota’s First District congressman, Al Quie, also had his eye on the job. When Quie was able to attract more support for the Republican gubernatorial nomination, Durenberger switched to the ballot slot for the two-year Senate term left vacant by the death of Hubert Humphrey earlier in the year.

In November, Durenberger and his running mates, Quie and Rudy Boschwitz, won all three of the state’s top political jobs, defeating their DFL opponents in an election that came to be known as the Minnesota Massacre. The LeVander protégé went on to serve three terms in the U.S. Senate, where he made a name for himself as the Republican’s leading authority on health care policy. But his last years in office were tarnished by ethics violation charges that later resulted in a disciplinary action by the full Senate. When Durenberger took his seat in the Senate after the 1978 election, the political foundation for Minnesota’s progressive Republican movement was already beginning to crack. The 1973 Roe v. Wade Supreme Court decision legalizing abortions during the first two trimesters of pregnancy contributed, in large part, to that fissure. Ironically, the Roe decision was issued by Justice Harry Blackman with the support of Chief Justice Warren Burger. Known as the “Minnesota Twins,” Burger and Blackman had grown up together in St. Paul. Both had ties to the Stassen wing of the Republican Party.

Durenberger, himself an abortion opponent, observed that Blackman’s ruling  “ruptured a political hornet’s nest. The resulting furor would last for decades and would reshape both major parties in Minnesota.” Before Roe, the DFL had a major anti-abortion faction, while Minnesota Republicans included a significant group of pro-choice supporters. But soon advocates on both sides of this very divisive issue would sort themselves according to their party identity. The anti-abortion faction, virtually en masse, left the DFL and become Republicans. At the same time, pro-choice Republicans found they were not welcome in their party. Many of them gravitated to the DFL.

Progressive Republicanism did have one last hurrah in Minnesota when Arne Carlson was elected governor in 1990. But in some ways Carlson was an accidental governor, moving up to the state’s top political job only because the Republican Party’s more conservative gubernatorial nominee dropped out of the general election race at the last minute because of a scandal.

By now, a new faction was gaining ascendancy in Minnesota’s Republican Party, according to Durenberger. “They were antiestablishment people with views on a number of issues that ran counter to the thinking that characterized the Stassen line. Many mistrusted and rejected public education. They were skeptical about science and hostile towards the teaching of evolution. They saw the women’s movement as a threat to traditional family values. The budding gay rights movement was sinful in their eyes.”

Taking advantage of Minnesota’s arcane precinct caucus system, right-leaning activists, many of whom considered themselves evangelical Christians, moved into positions of influence in the Republican party organization, displacing more mainstream party members who were part of the Stassen line.

During his 1988 re-election campaign, Durenberger was able to keep the right-wingers in his Minnesota Republican party at bay, in part because of his firm opposition to legalized abortion, but he would soon but heads with an emerging congressional faction led by the wily Newt Gingrich, then the House Minority Leader. Gingrich promoted a strategy of obstructionism, whose overriding aim was to deny Bill Clinton a second presidential term in 1996. Durenberger, who had hoped to broker a compromise over health care, found himself boxed in by Republican congressional leaders who refused to abandon their obstructionism and a Clinton administration that resisted efforts to make its health care plan, orchestrated by Hillary Clinton, more acceptable to Republicans.

Frustrated by his party’s rightward move and beset with ethics problems, Durenberger decided to give up his Senate seat in 1994. The next year, when he was out of office, the Minnesota GOP made a symbolic move that distressed the now- former U.S. senator. Following the Watergate debacle, the state Republican organization had added the term “Independent” to its name, making it the Minnesota Independent Republican Party. Durenberger welcomed the name change because it signaled the party’s effort to move closer to the center of the political spectrum. But party leaders dropped the term “Independent” in 1995, signaling that they were now part of the national right wing Republican mainstream. Durenberger regretted the name change.

“In Minnesota, Republicans no longer saw an advantage in standing apart from the nation,” he noted. “They no longer sought to appeal to independents with a label that implied a philosophy only slightly right of the nation’s ideological center and signaled a willingness to be creative in solving problems.”

Out of office now for 25 years, Durenberger continues to be distressed by what he sees as the extreme polarization of the American politics that has only intensified with the election of Donald Trump. Durenberger says he is still a Republican because he is “loath to disavow a lifetime of affiliation.” Moreover, he believes that he is upholding conservative principles when he promotes “market rate approaches for delivering needed public services.” But the former Republican senator acknowledges that more often than not he is voting for Democrats — particularly at the federal level. He even discloses that he went as far as to display a Hillary Clinton lawn sign in his yard in 2016.

Durenberger does not want to end his book on a negative note, so his final chapter, “Reviving the Center,” looks ahead optimistically to a post-Trump world. “In a perverse way, Trump’s presidency could produce a backlash so intense that Americans are newly motivated to work for ‘a more perfect union,’ ” he writes.

“When Republicans Were Progressive” went to press before the recent battle over the Brett Kavanaugh’s Supreme Court nomination came to a head. That battle only served to further shrink any remaining middle ground in Washington.

Durenberger may sound a note of hope about the future, but this country appears to be headed toward an even deeper blue and red divide on Election Day, Nov 6. Durenberger and others like him may face insurmountable obstacles – at least in the foreseeable future — as they attempt to revive the center in American political life..

From mainstream to extinct: A look back at the GOP’s progressive era in Minnesota