On a summer night in 2017, a police officer conducting a drunken-driving sweep in northeast Wisconsin tried to pull over an SUV after a check showed the owner had a revoked driver’s license. The driver fled. As the officer gave chase, siren blaring, the vehicle blew through multiple stop signs in a residential area.

The officer stopped the pursuit for public safety reasons. When police found the vehicle parked later, the driver was nowhere to be found.

The vehicle owner told the Wisconsin Center for Investigative Journalism that he was not driving the car that day; his ex-girlfriend had been using it for months. He asked that his identity be shielded in this story — “David” is a pseudonym — because although the case has been dismissed, prosecutors could still refile charges against him.

When David went to retrieve his SUV from the impound lot, he was arrested for felony eluding. The next day, the court commissioner set his bail at $5,000 — more than David could afford.

So he sat in jail for 84 days waiting for court — even though he had witnesses to swear he was not driving the SUV the night of the chase.

But he can never get back the nearly three months he served in jail for a crime he said he did not commit. David lost his job, car, apartment and visitation time with his now-12-year-old son. After he was released, his 50-50 custody changed to one weekend a month.

Although David got his job back, he had to dip into his retirement savings to pay off the loan still owed on the SUV that police seized. The impound fees, which had accumulated while he was jailed, eventually totaled more than the vehicle was worth.

“I thought you were supposed to be innocent until proven guilty, not guilty and then prove you’re innocent,” David said.

Such pretrial incarceration is common throughout the United States. About half a million U.S. residents are held in jail on any given day awaiting trial — a trend that has grown sharply since the 1980s, according to the Prison Policy Initiative, which researches and advocates against mass incarceration.

Some defendants spend longer in jail awaiting trial than their sentences ultimately call for. In Louisiana, the problem is so acute that some indigent defendants — who under the law are presumed innocent — can wait four years for their day in court.

Studies show incarceration for inability to pay bail can cascade into a chain of events that jeopardizes the lives of those charged, their families and society at large.

These problems, and a raft of lawsuits, have prompted numerous states including Wisconsin to question whether cash bail for minor offenses is cost-effective — or even constitutional.

According to a 1987 U.S. Supreme Court case, liberty is supposed to be “the norm,” and detention before trial “the carefully limited exception.” Today, for those too poor to post bail, detention is the norm.

At the same time, rich defendants can post high cash bails for even the most egregious charges such as homicide and rape, allowing these potentially dangerous defendants back into the community.

The Wisconsin Constitution states that cash bail can be used only as a means of making sure the accused appears for the next court hearing — meaning judges are not supposed to consider public safety when making decisions about bail.

Wisconsin judges still set high cash bails for serious crimes often using the justification that the accused is a high flight risk because he or she is facing a lengthy prison term, said Dane County Circuit Judge Nicholas McNamara.

Later this month, a Wisconsin legislative study committee will consider proposals to change the system including allowing or requiring judges to consider public safety when deciding whether to release a defendant pretrial and sharply reducing or eliminating cash as a condition of release.

Researchers have found that spending even a few days in jail awaiting trial correlates with defendants commiting more crimes later on and pleading guilty even if they are innocent. Research also shows defendants detained pretrial for even brief stays are less likely to show up for court than defendants not detained.

As more people are held due to inability to pay bail, the overall cost to taxpayers has ballooned, placing a financial burden on states, communities and their taxpayers.

The United States spends $14 billion annually on incarceration of approximately 450,000 inmates awaiting trial on any given day — or 63 percent of the country’s jailed population, according to a 2017 report by the Pretrial Justice Institute, which advocates for “safe, fair and effective” pretrial justice practices.

California made the decision in August to eliminate cash bail altogether, a move that the bail bond industry blocked pending a 2020 statewide referendum. Policymakers and judges across the country, including in New York, New Jersey, Georgia, Texas, Maryland and Ohio, have joined the chorus pushing to eliminate cash bail for minor offenses or set bail based on defendants’ ability to pay.

Increasingly, courts across the country have found use of cash bail unconstitutional. New York State Supreme Court Justice Maria G. Rosa said in overturning a ruling in a pretrial incarceration case, “Freedom should not depend on an individual’s economic status.”

Now-retired Milwaukee County Circuit Judge Jeffrey Kremers said back before the county changed its bail policies, many defendants could not afford even small cash bails.

“If you thought they were dangerous, you wouldn’t set bail at $200, right?” Kremers said.

Wisconsin ahead of the pack

Dane County is one of the few Wisconsin counties where clear data are available. According to an April report by Judge McNamara, among all criminal cases in Dane County from 2012 to 2016, 81 percent of defendants were released on signature bonds, meaning they pay only if they fail to return for their next court date or violate terms of their release.

Public defender Fritz Anderson of Superior recalled the case of a young man charged with felony 1st degree reckless injury who did not have $50,000 to buy release until his case was heard.

“He was eventually exonerated, but he sat in jail for six months,” Anderson said. “That was six months of his life — gone.”

Laurie Sazama Osberg, a public defender from Eau Claire, had a client who was jailed for more than 170 days on a $1,000 cash bond — nearly double the time he was ultimately sentenced to — after testing revealed the substance he possessed was not a drug.

Said State Public Defender Kelli Thompson: “We have the presumption of innocence now, and yet we have people every single day that are being put in custody on high cash bail based on poverty alone.”

Rep. Cindi Duchow, R-Town of Delafield, plans to re-introduce a constitutional amendment to require judges to consider the danger a defendant might pose to the community when setting bail. The amendment passed the Assembly with bipartisan support but stalled in the Senate.

The Legislature formed a study committee on bail and conditions of release to review Duchow’s proposal, examine Wisconsin’s pretrial laws and recommend solutions to the Legislature.

Rep. Evan Goyke, D-Milwaukee, a former public defender, said Duchow’s proposal does not prevent dangerous but well-funded defendants from going free. A member of the study committee, Goyke is drawing up a proposal for “substantial reduction or elimination” of cash bail.

Another proposal would allow judges to hold dangerous defendants without bail.

“Eventually, I do think there will come a time when cash bail is not being used,” McNamara said. “But people must understand there will be some people — even though they are still innocent — there’s enough public safety concern to hold them in custody.”

Committee members are scheduled to finalize their recommended legislation at their next meeting Jan. 29.

Pretrial changes under way in Wisconsin

Constance Kostelac, director of the state Department of Justice’s Bureau of Justice Information and Analysis, said these counties are adopting mechanisms to help ensure defendants meet terms of their release, show up in court or get diverted from jail altogether. 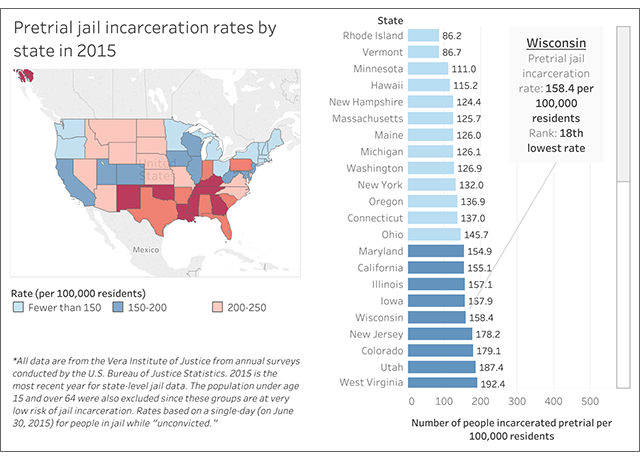 The counties will also pilot the Public Safety Assessment, an algorithm that helps judges identify low-risk defendants so they can be released pretrial without paying cash. This tool, called a risk assessment, is already being used in Milwaukee and Dane counties.

As Wisconsin takes small steps away from bail, Jason Hanson, a Dane County Circuit Court commissioner, warns not to disregard its usefulness. He said for many, cash bail is a fair tool for ensuring court appearances. “Sometimes, it’s exactly the right answer,” Hanson said.

One study of of more than 150,000 defendants in Kentucky from 2009 and 2010 found that low-risk defendants incarcerated before trial for just two to three days were 40 percent more likely to commit another crime pretrial than those who were released within 24 hours. The study was conducted by the Arnold Foundation, which works to advance community safety and improve the criminal justice system.

In Milwaukee County, 98 percent of those released to pretrial supervision whose cases were resolved in 2017 did not commit new violent crimes, according to a presentation by Kremers. 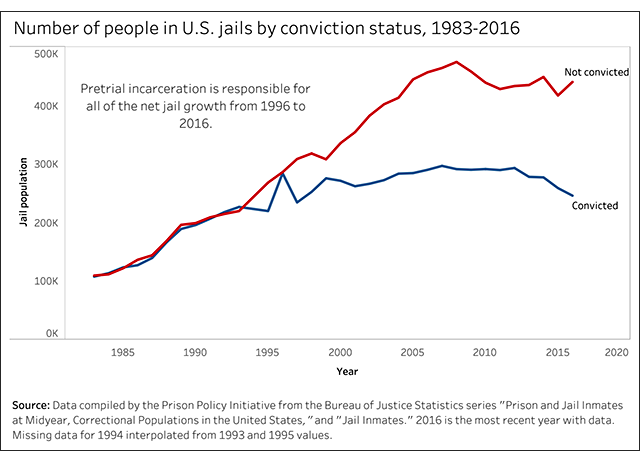 Reporter Riley Vetterkind contributed to this report. Sheila Cohen, one of the authors, is also a donor to the nonprofit Wisconsin Center for Investigative Journalism. The Center collaborates with Wisconsin Public Radio, Wisconsin Public Television, other news media and the UW-Madison School of Journalism and Mass Communication. All works created, published, posted or disseminated by the Center do not necessarily reflect the views or opinions of UW-Madison or any of its affiliates.

By Emily Hamer and Sheila Cohen