News
Rural Dispatches
Rural Dispatches is a yearlong series about the challenges and opportunities in Minnesota’s small towns, made possible by a grant from the Blandin Foundation.
Aug. 28, 2015

MADISON, Minn. – Six years ago, Adam Conroy was home for Christmas, taking a break from his job managing apartments in Moorhead, when his uncle, the newspaper publisher here, threw out an idea: How about coming to work as my editor?

“I thought, ‘What the heck? I don’t know anything about newspapers,’” Conroy recalled. “I thought he was joking.”

Conroy pondered the offer and decided to enroll in some journalism courses at Minnesota State, Moorhead. In 2010, he got out of real estate and moved to this town of 1,500 in far western Minnesota to work as a reporter at The Western Guard. Now he is the weekly paper’s managing editor.

Conroy had grown up in Wheaton, a similar-sized town an hour’s drive north of here, so he knew the terrain of small-town life. Still, he wondered what he would find in Madison, the seat of Lac qui Parle County, one of the most sparsely populated counties in Minnesota with just 7,300 people.

He was surprised. “There is a lot going on in this community,” he said.

Small-town vitality is usually measured by a few obvious factors, such as the growth (or decline) of the population, the breadth of the housing stock and the number of businesses on Main Street. It’s far more difficult to gauge the reach of a community’s volunteers and activists – whose work can be crucial to the success of local projects – though one way to measure that is by looking at the nonprofit sector.

According to the University of Minnesota Extension Center for Community Vitality, the number of nonprofit organizations in rural Minnesota has increased over the past few decades. Here in Lac qui Parle County, a triangle of prairie, small towns and farmland tucked between the Minnesota River and the South Dakota border, the number of nonprofits increased 19 percent between 2000 and 2010.

Extension demographer Ben Winchester conducted the research, crunching numbers provided by the U.S. Census Bureau and the National Center for Charitable Statistics. (Winchester’s research on this topic and others has fueled a rethinking of the rural narrative, which was covered in an earlier installment of Rural Dispatches). 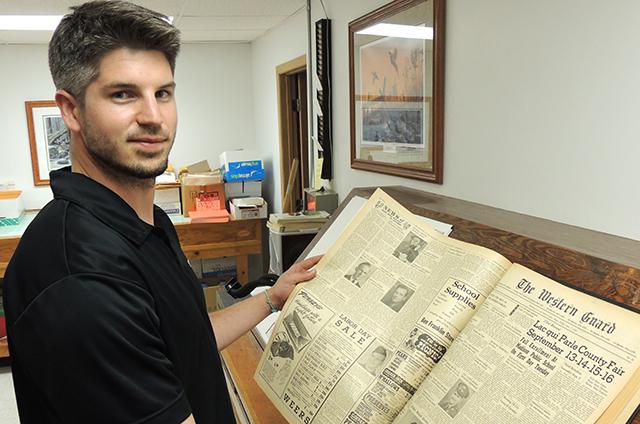 MinnPost photo by Gregg Aamot
Adam Conroy, managing editor of The Western Guard, in the stacks of the newspaper.

In studying the list of nonprofits across rural Minnesota, Winchester discovered a mix of well-known, established groups committed to broad community support (such as Kiwanis chapters and chambers of commerce) and newer groups devoted to specific activities (such as the Jack Attack Basketball Boosters in Dawson, in Lac qui Parle County; and the Friends of Glacial Lakes State Park in Starbuck).

The growth of nonprofits has been a national trend for several years, and while some of these organizations eventually shutter or fail to achieve their goals, Winchester sees their expansion in the smallest of Minnesota places as a sign of civic health.

A reflection of diversity

Winchester presents his research findings to civic groups across Minnesota and in other states. Often, longtime residents will complain about falling numbers in the Lions club or other organizations, saying, “Young people just aren’t joining our groups.” His response? “I tell them, ‘You’re right. They aren’t joining your groups. They are joining their groups!’ ”

The trend suggests that nonprofits are really a reflection of a community’s interests and demographics rather than a response to needs that aren’t being served by government or the private sector. “Our rural areas are much more diverse economically, socially and culturally than they used to be,” he said.

Statewide during that timeframe, the most rural counties – those located far from metropolitan regions with fewer than 2,500 people living in cities – saw a population decline of 4.6 percent and an increase in the number of nonprofits of 13.8 percent, according to Winchester’s research.

Jon Pratt, the executive director of the Minnesota Council of Nonprofits, offered the arts as an example of one driving force behind the expansion of rural nonprofits. He noted that Minnesota ranks at the top among the states for per-capita spending on the arts; consequently, nonprofit arts organizations have popped up in many communities to take advantage of those resources. (Madison has had an arts center since the 1970s; it was renovated in the mid-2000s).

“The key is local energy. You need a coalition of the willing,” Pratt said. “If you have a dozen people who want to do something together, it is amazing what they can accomplish. They set the agenda, pull resources together and then chart what they want to do.”

On a humid Friday morning in mid-July, as the temperature crept toward 90 degrees, Madison residents gathered for pork sandwiches (and bingo!) beneath tents set up along a stretch of Sixth Avenue, kicking off the city’s summer festival, Dragonfest.

Conroy, who is 30, spent the morning at the newspaper, helped with the community meal and then got ready for the evening’s events, which included the Lutefisk Run & Uff da Walk. (Madison, according to a Codfish statue that marks one entrance to the city, is the “Lutefisk Capital USA.”)

Conroy and others involved with the Chamber of Commerce created the event, building it off of an existing golf tournament and street dance. (The name comes from the old Madison High School mascot, the Dragons, which disappeared after consolidation with Milan and Appleton in the 1980s created Lac qui Parle Valley High School.) 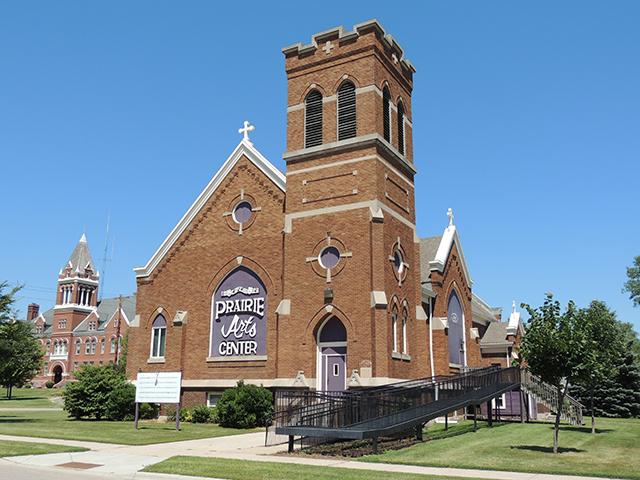 MinnPost photo by Gregg Aamot
The Prairie Arts Center in Madison, which was renovated in 2005 and 2006, is housed in a former Lutheran church. The Lac qui Parle County courthouse can be seen in the background.

In recent years, Madison residents have raised money for two significant projects: $300,000 to help build a new swimming pool, and $100,000 to upgrade the movie projectors at the Grand Theatre. Much of the promotion and fundraising was done by two local nonprofits: the longstanding Chamber of Commerce and the Madison Community Foundation, which was created in 2001.

Foundation secretary Sarah Radermacher moved to Madison in 2012 after marrying Jon Radermacher, the city manager (and Kiwanis president). She had previously lived in St. Paul for six years and, before that, in Moldova, in Eastern Europe, where she spent two years as part of the Peace Corps.

Radermacher, who is 35, wanted to get involved in the community and quickly found the foundation, which, according to its Facebook page, is currently backing several local initiatives, including funds for the library and baseball field.

“People are involved because they want to keep Madison viable, keep it alive, keep it a place where people want to live. (Volunteerism) is part of the culture here,” she said. “Small towns place a lot of value in supporting their neighbors and their community.”

Winchester, while enthusiastic about the trend, offers a not insignificant caveat: The demand for finite resources (people and money) threatens to weaken the viability of nonprofits in rural areas.

In other words, the same leaders and the same pools of money can only be tapped so many times in areas with tiny populations.

Geography can also be a barrier to the long-term success of nonprofits, notes Pratt, the Minnesota Council of Nonprofits official. In sprawling areas where many residents live on farms or in the country, he said, the travel required to bring groups together can be expensive and time-consuming.