News
Rural Dispatches
Rural Dispatches is a yearlong series about the challenges and opportunities in Minnesota’s small towns, made possible by a grant from the Blandin Foundation.
June 10, 2016

GRAND MARAIS, Minnesota – On the hillside above the picturesque Lake Superior harbor, 33-year-old Jay Arrowsmith DeCoux tidies the kitchen in his modest bed & breakfast. The southern Minnesota native worked as a guide in the Boundary Waters, managed motels and lived in a yurt with his wife and toddler before buying this four-bedroom house and taking in guests. Among his other jobs: teaching sausage-making at the nearby North House Folk School and serving as this North Shore town’s part-time mayor. “I do a little of this and a little of that,” he said.

One of the first things he did when remodeling the house to accommodate guests was install solar panels on the roof. And he is convinced that locally produced energy can be part of a larger strategy to use the casual, outdoorsy lifestyle here on the edge of the Boundary Waters Canoe Area Wilderness to attract small businesses.

“That should be our economic driver — small businesses that choose to locate here because it’s a great place to live,” he said, “because the satisfaction of their employees can be higher living in a place like this.” 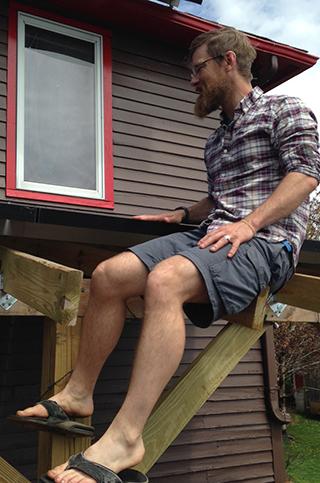 MinnPost photo by Stephanie Hemphill
Grand Marais’ part-time mayor and owner of the Art House B&B, Jay Arrowsmith DeCoux, inspects the solar panels on the roof over his deck.

Solar panels are sprouting up all over Grand Marais. The tiny town is reaching for sustainability with a determination that’s producing visible results. Geographically challenged, near the end of the road in Minnesota, Grand Marais is not served by a natural gas line, so wood, electricity and propane are the main options for heating homes. And some of the homes in rural Cook County (population 5,000) are completely off the electric grid.

That helps to explain why the county boasts 60-plus solar power installations. According to the Minnesota Department of Commerce, the number of the county’s residents with solar electric systems is roughly 10 times the statewide average.

There’s a streak of independence that seems to come from living so far north, and many of the town’s leaders are drawing on that quality to get residents, businesses, and the city itself to focus on sustainability. Often defined as managing resources in a way that ensures that future generations will have a good quality of life, “sustainability” is also a shortcut for saying that society needs to drastically reduce its use of fossil fuels to prevent catastrophic global warming.

“It’s not a tough sell here,” according to Staci Drouillard. “You grow up next to the lake and you live so close to the Boundary Waters Canoe Area Wilderness. The air is clean and the water is clean and it makes you very sensitive to the value of that.”

Drouillard lives outside of town and could have connected her house to the grid, but she chose not to.

“For me, it’s a conscious decision to use renewable energy rather than fossil fuels as much as possible.” Drouillard coordinates the Cook County Local Energy Project, an eight-year-old citizens’ group formed “to coordinate a local response to the worldwide transition away from fossil fuel-based energy sources,” according to its website. Yes, this town of 1,300 people, most of whom have to hustle pretty hard to make a living, has a paid coordinator for a nonprofit group leading the entire community toward being more earth-friendly.

As an enthusiastic participant in the Minnesota Green Step Cities program, one of the first things the Local Energy Project did was to devise an energy plan; it was adopted by the city of Grand Marais and Cook County in 2012. The plan is forward-looking, with 10 goals, each with strategies and action steps. Results include a detailed guide for homeowners considering solar power, a residential energy efficiency program, and extensive research and planning for a biomass district heating system. 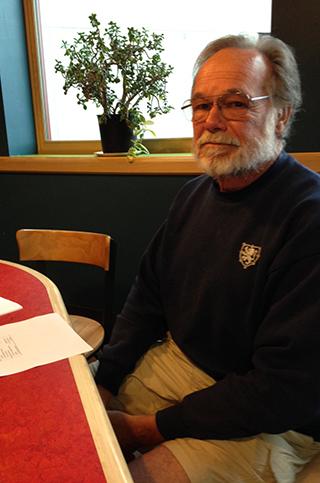 MinnPost photo by Stephanie Hemphill
Don Grant sits in a meeting room at the Cook County Whole Foods Co-op. Grant has championed solar electricity installations at the co-op and at city-owned buildings.

In the residential efficiency program, a local certified home auditor uses a blower door test and an infrared camera to spot leaks. It costs $400, but $300 of that can be rebated if the homeowner follows up with recommended improvements.

“It was set up that way so there’s an incentive to do something,” said Don Grant, a board member of the Local Energy Project. “The audit doesn’t accomplish anything on its own. You get the money back if you actually make your home more efficient.”

Since 2013, the program has audited 35 homes, sparking retrofits that produced an estimated reduction in carbon dioxide emissions of more than 17 tons.

Energy efficiency was at the top of the list when the Cook County Whole Foods Co-op designed its new building a block away from the harbor. The wood-trimmed, light-filled store opened three years ago and was recently recognized by National Cooperative Grocers for the extreme energy efficiency of its design, especially the compressors that cool freezers and refrigerators. Now the co-op is about to cover its flat roof with solar panels.

“One of our ends is to be a sustainable business,” said Don Grant, a member of the co-op board of directors. “Not only will the photovoltaics save money, but they’ll reduce our carbon footprint by about 33 tons of carbon dioxide a year. That’s huge.”

The panels will provide about one-quarter of the co-op’s electricity needs. Grant hopes to get a grant from the U.S. Department of Agriculture to help pay for them. The co-op will receive tax credits for the installation and cash reserves will cover the rest.

Grant is a semi-retired chemical engineer who sold his company to his workers and moved from the Twin Cities to Grand Marais in 2012. He spearheaded the installation of other solar projects in town. Solar energy now heats water in the shower house at the city campground next to the harbor and produces electricity at the municipal golf course on the bluff above town. And Grant has a photovoltaic system for his own house.

Across the bay from the co-op, George Wilkes has devoted the last 24 years to building a business grounded in sustainability. The Angry Trout Café is furnished by local craftspeople. The commercial fisherman next door delivers lake trout and herring daily, and nearby growers supply a short summer’s worth of veggies. Wilkes has been thinking about these issues for a long time. Way back in 2004, he wrote the “Angry Trout Café Notebook,” a wry manifesto about the importance of relying on local resources. 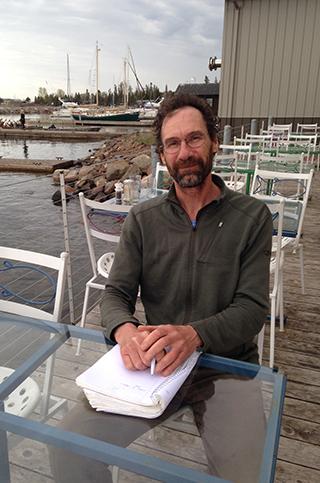 MinnPost photo by Stephanie Hemphill
George Wilkes combines business with a commitment to sustainability at his popular Angry Trout Cafe on the Grand Marais harbor.

“I think local food and local energy are the two major hurdles to get to sustainability,” Wilkes said.

His short beard flecked with gray, Wilkes combines an easy-going manner with a sharp understanding of the workings of bureaucracies. As a member of the city’s Public Utilities Commission, Wilkes led a campaign to localize energy to heat the town’s major buildings. He calls it an “elegant system,” and it’s widely used in Europe: a highly efficient burner that would use wood waste from Hedstrom Lumber Company six miles up the Gunflint Trail to heat the schools, hospital, courthouse, and other large buildings. Another possible source of fuel is the Firewise program, which encourages rural residents to clear trees from around their homes.

Consultants conducted feasibility studies, designed the system and laid out a business plan, but a major hiccup occurred when the price of propane suddenly plummeted in 2014 and the hospital decided not to sign a long-term contract. Still, Wilkes remains hopeful. “The business plan is sitting on the shelf at City Hall and in the event we either get a rise in propane prices or some public funding, that project could be resurrected,” he said.

Feasibility studies on biomass as fuel 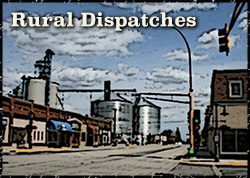 The Minnesota Department of Natural Resources has been encouraging the use of biomass as fuel by conducting feasibility studies in forested areas without natural gas lines. According to the DNR’s energy program manager, Mark Lindquist, expanding use of biomass could help diversify the economic base of the struggling timber industry. Recent mill closures have cut the demand for wood by a million cords a year, and that’s a problem for the DNR because it relies on commercial logging to achieve forest management goals. With interest from the DNR and other state and federal agencies, public money could be made available for projects such as the one in Grand Marais. Information about the DNR’s biomass program can be found here.

Arrowsmith DeCoux, the mayor, is getting good at working with other levels of government. The city and county are working together on new parks and trails. And he is planning to take his commitment to sustainability to the next level by investing in energy-saving doors, windows, and appliances at the B&B.