News
Rural Minnesota
This project is made possible by a grant from the Otto Bremer Foundation.
Oct. 3, 2011 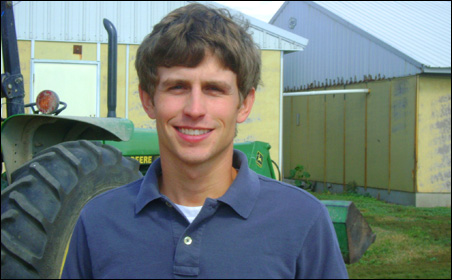 MinnPost photo by John Fitzgerald
Dan Roberts and his wife, Megan, have settled in Madelia, near his family’s farm.

MADELIA, Minn. – Even though Dan Roberts left home after he graduated from high school in 2006, there was never any doubt in his mind that he’d come back to the family farm.

He loves the farming life. His family has been on the same piece of ground — about six miles between Lake Crystal and Madelia in southern Minnesota — since the 1930s. His grandparents, Ken and Marion Roberts, still live on the home place. His parents, Steve and Marvel, live a mile away. His uncle David works on the farm, as does Dan’s 16-year-old brother Ryan.

Roberts’ case is unusual. He has come back home at a time when the economy and trends in agriculture are squeezing many young people off the land. Of the 64 students in his graduating class at Lake Crystal Wellcome Memorial High School, Roberts can think of only three who have remained on the farm.

“And I don’t think it’s because of a lack of interest,” Roberts said recently from his farm’s shed, one John Deere tractor parked inside and one family semi tractor-trailer outside, ready to haul soybeans to market once the beans are ready to harvest.

“With consolidation in agriculture, there are fewer family farms to come back home to. And agriculture today is significantly more capital intensive — so if you don’t have an operation that’s established, it’s pretty difficult to do.”

Hog operation is critical to family‘s income
The Roberts family owns 1,500 acres and rents another 500 on which they grow corn and soybeans. They also have a farrow-to-finish hog operation with 500 sows that can finish out 10,000 to 12,000 pigs each year.

Roberts, who is 23, has no illusions about where the money comes from. “The hog operation is how we make enough to support three families,” he said. “The land alone wouldn’t be able to support us.” 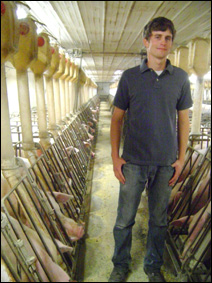 MinnPost photo by John Fitzgerald
Dan Roberts, 23, keeps an eye on some of the 500 sows on his family’s farrow-to-finish hog operation.

It’s a trend that doesn’t surprise Bob Worth, a farmer from Lake Benton, but perhaps not for the obvious reasons.

As vice president of the American Soybean Association, Worth, 59, knows something about the topic.

Reasons to leave
There are lots of reasons to leave the farm, Worth said, not the least of which has been the farm economy. Until recently, young people who wanted to start a family couldn’t do so in agriculture.

“Prior to last five years, agriculture wasn’t very profitable at all. It was a struggle to make it work for more than one family,” he said.

Wanderlust and a desire for an education also take many away from the farm.

And, said Worth, another reason to leave the farm is that “there’s a real lack of spouses out here. Definitely not many young girls stay. They graduate from high school and they leave for jobs in the city or for school. In a town of 600 people, there just aren’t any opportunities for them.”

But the trend is changing.

“In the last five years the money in agriculture has been good. Besides, they find that dad’s ready to retire and make room for them,” Worth said, “so you’re seeing the return of people in their late 20s and 30s.”

A godsend to older farmers
They’ve seen the world, worked a job or two, gotten married and realize raising cows isn’t too bad of a way to make a living and raise a family. Worth himself returned to his family’s farm after eight years with the National Guard in the 1970s.

The new blood is a godsend for older farmers. Almost the entire operation — from the feeding pens to the combine to cash flow planning — is computerized, and the next generation is more savvy about computers and software.

Worth, who was being interviewed by phone while running a combine on his farm near the South Dakota border, chuckled when he said he couldn’t operate his combine (or his phone) without a satellite connection. “God help us, if someone ever messes with our satellites, agriculture in this country will come to a stop.”

Swimming against the tide
Dan Roberts took all the obstructions and broke them.

After high school, Roberts enrolled at the University of Minnesota. No particular reason, he said. He wanted to study agriculture and they have a good ag program, but his decision wasn’t the product of a prolonged period of thought. 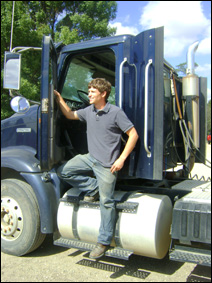 MinnPost photo by John Fitzgerald
Dan Roberts steps out of one of the two tractor-trailers his family uses to operate their 2,000-acre farm.

His time in the Twin Cities — he graduated in 2010 with a degree in agricultural and food business management — provided him with two things that will greatly benefit him as he moves into the family business.

The most important thing he came away with from the Twin Cities is a spouse. Dan and Megan Roberts live in Madelia, six miles away from the family farm. They began dating in their sophomore year at the U. She grew up on a dairy farm near Paynesville and was more than willing to join Dan in a rural life. She is, however, currently studying to earn a master’s degree in public policy from the Humphrey Institute of Public Affairs. She spends three days each week in Minneapolis and four in Madelia. “She wants to be a professor,” he said. “(Being apart) is a challenge, but we’ll work it out.”

Economics — and a larger world view
Roberts also came away with a degree from a top-notch university. As we stood in his machine shed, rows of large, dusty tools hung carefully from pegboard over a bench covered in sawdust, a large green Deere combine looming in the shadows, I asked Roberts what he took away from his degree. Here’s what he said:

“I received good exposure to the underlying financial structure of agriculture and the economy in general. When you grow up on a farm and work on it every day, sometimes you get a ‘small’ world view. Sometimes you miss what’s going on in the world. You have to realize that it’s not just what’s going on here that affects profitability, but world events have ramifications on profits as well. You just have to go outside to see that.

“Agriculture is definitely geopolitical in nature. You have to understand that so you can manage your margins and not just shoot for a higher price each year. Just because your neighbor has a bad crop doesn’t mean you can’t manage your crop efficiencies.”

But don’t get the idea that it’s all about the bucks for Roberts. It’s about maintaining a lifestyle that provides for his family and protects them from the inevitable lean years.

“We don’t need to get rich,” he said. “I grew up in an environment of very disciplined management and growth. We don’t make rash decisions. Just because you can buy a new tractor doesn’t mean you should buy a new tractor.”

Returning requires planning, patience
Roberts knows of young people whose parents didn’t help them return to the farm. Financial plans have to be made in advance to make sure a new family can thrive on the income a farm generates, and some operators don’t make those plans, Roberts said.

Map of Lake Crystal and to the southwest, Madelia:

And some young people don’t want to wait until they become their own boss.

“For a lot of families it’s a slow, gradual process. Like with my dad — he’s spent his life creating a valuable operation and now that he’s seeing the benefits, he’s not going to just say, ‘I’m going to stop now.’ “

It’s a process that parents have to respect. Roberts has saved enough that he recently bought his first piece of land: 39 acres near the home place. “It’s going to be my foothold,” he said.

Farms are more efficient now
Another barrier for young people contemplating life on the farm: There is simply less need for farmers. Increased mechanization, better fertilizers, new hybrid seeds, and other technologies have made the job of farming more efficient. The National Institute of Food and Agriculture serves up these facts:

So with the number of acres farmed remaining relatively static and the ability to produce goods on the rise, fewer young people like Dan and Megan Roberts need to come back to the family farm. And it’s been that way for at least a generation. While Dan’s uncle works on the farm, his two aunts don’t have anything to do with agriculture. And while his younger brother Ryan, 16, is helping on the farm, his sister Diana is attending Minnesota State University-Mankato to become an accountant.

And so it goes.

For this couple, though, it looks like a long-term commitment. Dan says he wants to get involved in local government.

“I’ll be living here for what, the next 70 years? There are a lot of challenges facing rural communities. You can’t just sit back and let someone else take care of them. You have to work for your community.”

Back to Madelia: A man, a plan, a family farm