News
Rural Minnesota
This project is made possible by a grant from the Otto Bremer Foundation.
Dec. 9, 2011 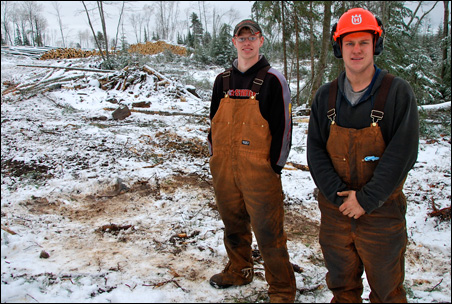 Skyler Johnson, 19, and his brother Colee, 21, own Johnson Brothers Firewood and Logging Company in Hovland, Minn. Surprising as that may sound, it’s not even their first business.

As a young child, Skyler learned how to buy and sell used vehicles by watching his dad. By age 14, he was having some success dealing vehicles himself. He says the key was to “learn how to read people.”

MinnPost photo by Steve Date
The brothers jumped at the opportunity to buy a logging company.

During high school, Skyler and Colee started a firewood business, buying and reselling hundreds of cords of timber from a local logging operation. When the owner of that company saw how hard they worked, he took them under his wing and gave them jobs working for him.

Later, when he decided to move to a warmer climate and sell the logging company, the Johnson brothers seized the opportunity. They bought the company on Skyler’s 18th birthday.

Tourism brings some jobs, but few careers, for young people in the little towns along the North Shore of Lake Superior. Many local residents take whatever work they can find to patch together a living. High-school graduates who go to college mostly don’t return to the area. Those who stay often end up in low-paying, dead-end or seasonal jobs.

Skyler and Colee Johnson, along with their younger brother, Clay, have, through hard work and shrewd business sense, found a way to carve careers and a business out of the north woods.

I recently visited Skyler and Colee as they cut timber near Grand Marais. In today’s video, they talk about the logging business, about employment opportunities for young people, and about life in a small town on the North Shore.