News
Rural Minnesota
This project is made possible by a grant from the Otto Bremer Foundation.
Dec. 8, 2011 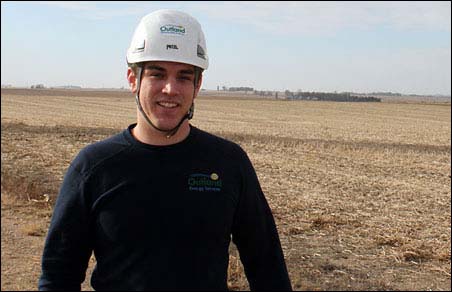 LUVERNE, Minn. — It is orthodoxy in our society to pity the person who has earned nothing more than a high-school diploma. There is endless chatter in the media about the limitations undereducated Americans will face: lower salaries, fewer benefits, passed over for one promotion after another.

There must be exceptions, right? There are always exceptions. 24-year-old Jordan Bielefeld is one of them.

I am driving with Bielefeld through Luverne, in Rock County, on our way to one of his many southern Minnesota worksites. He is a project manager for a crew of technicians who service those giant wind turbines that seem to be almost multiplying in the soil here.

I can ask him anything about these towering wind beasts, and he will answer with a palpable passion for his work. At first I can’t tell if his passion is for doing good work or for doing this work specifically. It quickly becomes clear that it is both.

We turn off onto a dirt road with a “No Trespassing” sign posted and he’s telling me about the time he got to wave to his small children from atop a turbine (they loved it — you can imagine). Next he is telling me about the time he thought he might die on one (you would not be surprised to learn that changing the turbine blades is a harrowing experience). His passion has been replaced by deep reverence.

That reverance is there again when he opens a door at the base of the turbine and we step inside. He warns me not to tough anything. We’re looking at the brains and the bowels of the thing. He tells me how much electricity is flowing through the massive strips of copper we are staring at; he speaks softly. 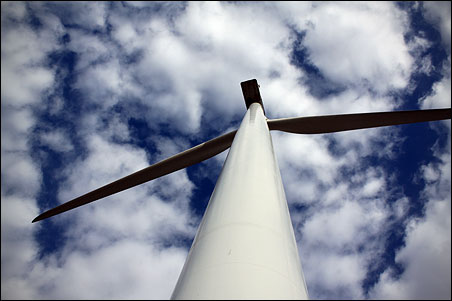 Bielefeld was working at a sock factory in Osage, Iowa, when he heard about a job at Outland Energy Services almost two years ago and landed it. It was not the job he has now — he seems to want to climb whatever career ladder is in front of him, and he’s been climbing quickly at Outland. When we put out word that we were looking to connect with young people in rural Minnesota to talk about their work, an Outland executive encouraged Bielefeld to be in touch.

“I strive to become the best of what I do every day,” he says to me. It is easy to string those words together like that, but it is really rare to mean it.

For a young person living in rural Minnesota without a college degree, being the best does not guarantee opportunity. You need to be the best for somebody who can pay you for it. For Bielefeld, it is the wind industry. For many others too.

Wind industry opened opportunities
“Wind opened up a lot of different opportunities in rural areas,” he says. “Lots of construction work — a lot of cement goes into those bases. There are the designers and surveyors. There is work for electricians. The transformers are liquid transformers with mineral oil in them, and the levels have to be watched by people trained to do that work.”

Bielefeld sees himself working in this expanding industry for the long haul. But what if wind had not come along? He says he would have opened a shop to work on cars. He’s been working on cars for years — and tractors before that. And by “working on” I mean actually working.

“As far as I look back I had some sort of job,” he says. “I was either helping my grandpa on the farm baling hay, or my uncles around their places with odd jobs. I went from that right into working at a tractor implement company when I turned 15.”

Qualities necessary for success
He did a little time at a small college in Wyoming, but got restless. He says he has qualities that can’t be taught in college. Passion and reverance should be on that list. He adds another: “I want to learn the ins and outs of every single thing I deal with,” he says. “If you don’t have that — yeah, college helps a lot of people get in the door, but are you going to be successful?”

And that is the thing we never talk about. The pitch for a college education is all about getting in the door. What about once you walk through that door? Will college help you then? Maybe. But so will being passionate, reverant, and driven. There aren’t degrees for those things.

And what if not going to college can actually be an advantage? Without a college degree, you have to work hard to prove yourself; you can’t just wave a piece of paper.

Maybe it would be hasty to treat Bielefeld’s story as a parable. After all, there are plenty of driven, passionate people who are denied opportunity every day because of their race, ethnicity or gender. But it would be downright irresponsible not to let his story be a challenge to the messages we send to ambitious young people who buck orthodoxy and jump right into the work of being exceptional.

For wind-turbine project manager, passion for work pays off