News
Rural Minnesota
This project is made possible by a grant from the Otto Bremer Foundation.
May 4, 2012

This marks the final week of MinnPost’s yearlong series, Rural Minnesota: A Generation at the Crossroads. The project was made possible by the Otto Bremer Foundation.

LANCASTER, Minn. — Lacey Hewitt’s darkest night in Haiti didn’t come after the Jan. 12, 2010, earthquake that leveled the country, although there were many difficult times after that tragic event. The most difficult night came several months earlier when she went to sleep with the dozen or so babies she was caring for at Ruuska Village, a walled community near Port-au-Prince that cares for Haitian women and orphans.

A baby sleeping next to Lacey died during the night, one of the few casualties ever at Ruuska Village, Lacey said.

“I cried out to God. Why does He let children suffer? Why is there so much pain? How could he let a baby suffer?”

Lacey, a deeply religious young woman from Lancaster, Minn., said God spoke to her in that moment. “It felt like God told me He was waiting for her to come home. He keeps a record of every tear. It was calming for me to know that. If I’m feeling pain, God feels 10 times more pain. We just have to do what we can.”

Lacey, now 28, spent nine months in Haiti in 2009 and 2010. She stayed for months to help in the wake of the earthquake that devastated the island nation. Haiti is the poorest country in the Western Hemisphere, with 9 million people living in a space the size of Massachusetts. 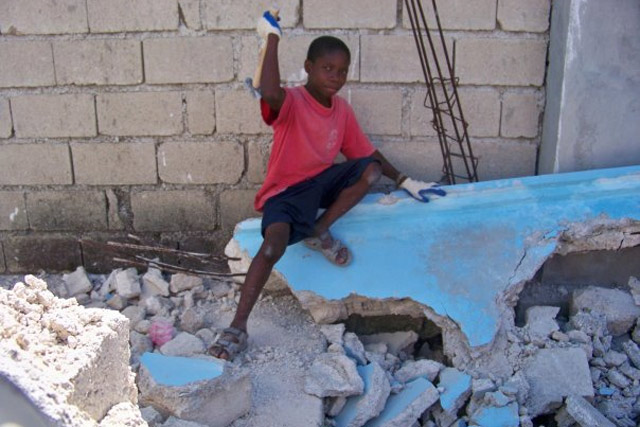 Even before the earthquake, Lacey was horrified by the conditions in Port-au-Prince.  “Children taking baths in raw sewage, crawling out of garbage-filled culverts. People begging for money and starving on the street. There’s no running water and nothing but poverty and garbage everywhere. It was quite a shock.”

The connection between Lacey’s family and Ruuska Village in Haiti began years ago. Her parents, Jim and Kelli Hewitt, wanted to adopt even as they began having their own children. “More than 20,000 children die each day worldwide because of preventable causes,” Kelli said. “We’re in a very rich country compared to the rest of the world and we didn’t want the number of our own kids to get in the way of our helping children who need help.”

Unfortunately, they found the cost of adoption to be prohibitive. “We had to put our dream on the back burner for a while,” Kelli said.

In the meantime, they added Sheila, Lacey, Katrice, Ashlee, Mallori Marshall and Whitney to the family. Jim works as a deputy sheriff in Kittson County and Kelli is a stay-at-home mother, home schooling the children on their 2,000-acre ranch outside Lancaster. When Whitney was 15 months old, they learned of Barbara Walker and Ruuska Village. They were intrigued when they learned adoption could be more affordable.

“We looked into Ruuska Village and found it to be reputable,” Kelli said. The compound of about 15 one- and two-story buildings in Bon Repos – about six miles north of Port-au-Prince – is surrounded by a 12-foot-high concrete wall. Walker accepts sick babies and employs Haitian women to care for them while she provides the women with food, education, lodging and security. According to Kelli Hewitt and the Ruuska Village website,  the project is funded by donations.

When the Hewitts first contacted Walker in 1996, she had just accepted three children into the village, 15-month-old twins Josiah and Jessica and newborn Isaiah. They were brought to Ruuska Village by a Mennonite pastor in the Haitian mountains who said their father had been killed seven months ago and their mother died while in childbirth with Isaiah, whose twin also perished. The Hewitts made arrangements to adopt all three.

“When they came here, Jessica had yellow hair from the lack of protein,” Kelli said. “The baby had been drinking flour water because their grandmother had nothing to feel them. They were covered with scabies and all three had giardia.”

After adding Carson, Kaylee and Walker (“we call them ‘bios,’ Kelli said), they began the adoption process again in 2009.

In the meantime, Lacey had grown up around the children but was directionless. “I was just a farm girl,” she said. “I thought about cosmetology, maybe becoming a professional horse trainer.” She drove a truck for local beet farmers and worked as a waitress and bartender. She considered becoming a nurse, but thought the classes would be too difficult.

She thought of volunteering to help in Haiti. When her mother mentioned this to Walker in June 2009, she offered Lacey the opportunity to volunteer at Ruuska Village. Lacey put a rush on her passport and landed in Port-au-Prince in August 2009.

“It was kind of overwhelming,” she said. “I was 25 at the time and I had never been out of the country. I wanted to help so bad that I wasn’t really scared, but I did have culture shock. Being a different color and having everyone stare at me, getting heat rash – it was just a shock to the whole system.”

On her first day, she was told to take care of a 15-month-old who was not eating well. “I remember seeing her lying on the floor – it’s so hot they sleep in the tile floor. I didn’t know if she was alive or not, so I picked her up. Barb asked me what I was doing and I told her I was just checking to see if the baby was OK. She asked me if I knew my 10 Commandments. I said yes. She asked if I knew the 11th Commandment: Thou shall never wake a sleeping baby.”

That baby is now Maria Grace, a 3-year-old living with her adoptive parents in Argentina. “I keep in touch with her parents. They send me photos through Facebook. I’m trying to learn Spanish so I can talk to her,” Lacey said.

Lacey woke every morning at 5 a.m. when the babies woke. She and another woman were in charge of the infants and the sick children, numbering usually about 15 except one week when an infection swept through the village and they had almost every child in their building. They went four days without sleep dealing with the children’s fever, diarrhea, vomiting and dehydration. Each child was on four different medications.

Lacey also helped with the cooking and, after the children went to sleep, the adoption paperwork.

“I don’t think I ever experienced so much joy as when I was there,” she said.

Late in the day on Jan. 12, 2010, Lacey was carrying two 5-gallon buckets of water to the second floor of the concrete main building to be disinfected. She reached the top of the stairs, set the buckets down and picked up a fussy baby. Then the earthquake hit – 7.0 on the Richter scale.

“It was so loud, like a bomb went off,” Lacey said. “It was just like a roller coaster – up and down and sideways. I was just screaming. I could not stand. A TV on a stand flew across the room and smashed into a wall. A curtain rod fell and hit right next to a baby’s head. There was glass everywhere. Everything in the kitchen was on shelves or in cabinets, and it all was on the floor.”

Lacey took babies downstairs and could see light shining through cracks in the building walls. “It didn’t fall, but it sure could have,” she said. Everyone went into the courtyard. Several of the village’s buildings were damaged, and the security wall was destroyed.

“You could go on top of the house and see the entire neighborhood was flattened,” Lacey said.

Miraculously, of the 60 orphans and the 15 nannies in the village at the time, only one child had a scratch and one nanny had a cut foot that became infected. Soon they set up tents to protect the children as neighbors congregated at the village for help. After the initial shock, more immediate needs such as food, clean water and power had to be addressed.

“It was impossible to keep bottles and laundry clean without clean water. The babies are fragile anyway, and we had to keep them outside. And they were crying and crying because they were out of their comfort zone. It was awful.”

Soon enough, water was procured and disinfected, the kitchen was cleaned up and food prepared, and the work of putting Ruuska Village together again began.

“My dad flew in right after the earthquake,” Lacey said. “He saw all the news reports and couldn’t get through to me, of course, so he gathered all his tools and borrowed tools from his friends, flew to Miami and caught a private plane with doctors and nurses and flew into Haiti. I could have gotten out after the earthquake, but there’s no way I was leaving those kids.”

Both Jim and Lacey returned to Lancaster in February, but not alone. The Hewitts had begun the adoption procedure for two Haitian children in August. Then, in September, Lacey bonded with two older children at the village and asked her parents to adopt them as well. After the earthquake, the U.S. Citizen and Immigration Service instituted Humanitarian Parole status in Haiti, which allows for expedited immigration for people under unusual humanitarian circumstances. In this case, it meant expedited adoption for Haitian children already in the adoption process.

Thus Hudson Thomas and his sister Katina joined the family, as did Easton and Jennyka. It was Easton and Jennyka who especially caught Lacey’s heart. “Their mother dropped them off at the village because she couldn’t feed them,” she said. “She was a single mother with seven children and she knew that these two would be cared for in the village. I knew that since they were older children (Easton was 4 and Jennyka was 4), their chances of adoption were slim. My heart went out to them.”

“They were just skin and bones (when they got to Minnesota),” Kelli said. “I’ve never seen arms like Jennika’s.”

Her time in Haiti has put Lacey’s life into focus. She is taking classes both at Northland Community College in East Grand Forks to get her associate’s degree and pre-nursing classes at the University of North Dakota in Grand Forks in preparation to become a registered nurse.

“I’ll go back to Haiti,” she said. “After seeing the tremendous need there, I’ve decided to become a nurse. I want to do something worthwhile.”