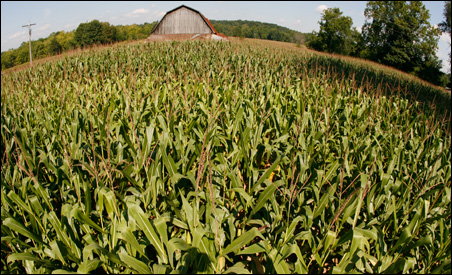 The global uproar over fiddling with genes in food crops has quieted as millions of people ate products made from genetically engineered corn, soybeans and other plants with no apparent ill effects.

But the assessment of the crops’ impacts on the environment and on farmers is far from over.

What’s no longer in question is whether farmers would accept the high-tech varieties that first were commercialized in 1996.

Last year, 92 percent of all the soybeans grown in Minnesota carried genes added to help control weeds. Corn was close behind: 88 percent of the Minnesota crop contained genes to help farmers fight insects or weeds or both.

“Not since the introduction of hybrid corn seed have we witnessed such a sweeping technological change in U.S. agriculture,” said the report compiled by a committee of the Research Council’s Board on Agriculture and Natural Resources.

Nationwide, almost half of the land for everything farmers grow is planted to engineered crops — primarily cotton, corn and soybeans.

The reasons for the rapid switch to the new technology are many. GE crops take a good share of the guesswork out of farming. They help protect yields, reduce the danger of handling harsh pesticides and save farmers money even though they have to pay a “technology fee” for the GE seed.

As for consumers, they have pretty much accepted so-called GMOs with some notable exceptions discussed later in this article.

Still, consumers and farmers alike have reason to heed concerns raised in the report.

Revenge of the weeds

Like bacteria that evolve to slip through our antibiotic barriers, farm pests have ways of getting around the genetic fortification built into the plants.

The most popular of the genetic traits engineered into plants allowed them to stand up to the weed killer glyphosate. It is considered to be less toxic to animals than other herbicides farmers had used and less polluting of lakes and streams.

With GE soybeans, for example, a farmer can spray glyphosate directly on fields, eliminating the need for complex pre-emergent and post-emergent weed-killing strategies. What’s more, the farmers can get by with less tilling to control weeds.

The worry, though, is the revenge of the weeds. Nine weed species in the United States have evolved resistance to glyphosate since 1996 when GE crops greatly expanded the chemical’s use on farms. Two of the weeds found with some new resistance in Minnesota are giant ragweed and waterhemp.

Further, weeds that always had some resistance to glyphosate are creeping into crop fields like never before. In some areas, they are growing out of control to threaten yields — and, ultimately, food prices.

The report warns that “weed resistance to glyphosate may cause farmers to return to tillage as a weed-management tool and to the use of potentially more toxic herbicides.”

It calls for a concerted effort by farmers, government agencies, universities and the companies developing the technology to focus on the resistance problem and develop more diversified tactics for combating weeds.

A similar worry lurks for genes engineered into corn and cotton plants to help them resist destructive insects. The genes come from the natural soil-dwelling bacterium Bacillus thuringiensis or Bt. Although Bt is lethal to corn borers and some other insects, it is more benign than most pesticides.

Organic growers and many others worry that the widespread use of the Bt genes in engineered crops will invite resistant pests. In other words, they worry that everyone will lose the crop-saving benefits of Bt.

The report downplayed that risk, saying “the emergence of insect resistance to Bt crops has been low so far and of little economic or agronomic consequence.”

David Andow is not convinced, though, that the threat is inconsequential. A University of Minnesota professor of insect ecology, Andow was one of several experts who were asked to provide “candid and critical comments” during the report’s preparation.

Insects have broken through Bt’s barriers in South Africa, India and Puerto Rico within just a few years after the introduction of GE crops, Andow said in an interview with MinnPost.

A key reason that hasn’t happened on a larger scale within the 50 states of this country is that farmers have been required to create refuges in their Bt fields. They had to dedicate one in five of their acres to non-Bt plants.

Now there is a move to shrink the refuges for some cultivars, Andow said, and the resistance debate is heating up again.

One major objection to the crops was based on the risk that inserted genes would flow to wild or weedy relatives of farm plants and disrupt environmental balances.

It is a multi-million dollar headache, though, for organic farmers whose markets depend on claims their produce is GMO free. Pollen from a neighbor’s biotech corn field can collapse that claim in a hurry.

Drifting genes also can pollute fields of farmers who grow specialty corn for export to markets in Europe and Japan where many consumers still want nothing to do with gene-altered crops.

This is a real and growing problem, the report says, because genetically engineered traits are likely to be introduced into more crops. It calls for establishing tolerance thresholds in definitions of what is organic. In other words, some level of genetic impurity would be allowed and a food still could be labeled organic.

We’ll see what organic consumers say about that.

Taking the positive side

Generally, the Research Council’s report takes an upbeat view of genetic engineering’s role in agriculture, saying it largely has been successful for farmers and beneficial for the environment.

Indeed, it calls for more public research to expand the technology into crops that may not be commercially profitable but could be beneficial in this country and the developing world too. Prospects it mentions include crops engineered to tolerate drought, curb pollution, boost renewable energy and stand up to climate change.

Further research may support those developments, but Andow would like to have seen more caution in areas where real risks have yet to be thoroughly studied and resolved.

“My overall impression was that they tended to take the positive side where ever there was some uncertainty,” he said.

The report acknowledges, though, that consumer and environmental concerns have slowed the spread of the technology into some crops.

One lesson from 15 years of debate over the technology has been that “commercial viability can depend on the willingness of farmers to adopt the product and the willingness of processors and consumers to accept it,” the report said.

While the report focuses on the Big Three (soybeans, corn and cotton), it summarizes the status of GE varieties in other crops: