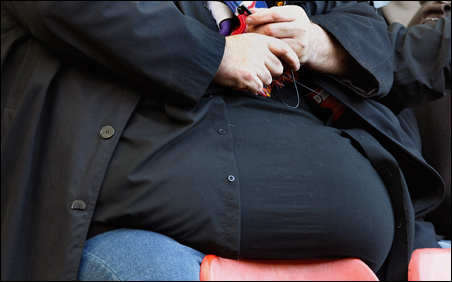 REUTERS/Phil Noble
A better method of determining whether you’re unhealthily overweight is to measure your waist circumference and/or your waist-to-hip ratio.

Forget about your BMI (body mass index). Your waist measurement appears to be a more telling indication of your risk of dying prematurely of heart disease.

This may be particularly true for people who have been already diagnosed with heart disease, according to a Mayo Clinic study published Monday in the Journal of the American College of Cardiology.

The study (which looked at data from almost 16,000 people involved in five studies from around the world) found that people with a history of heart disease who had even a modest beer belly or muffin top (“central obesity” in medical lingo) were up to twice as likely to die during a period of seven years than those without excess belly fat.

That’s the same risk as smoking a pack of cigarettes a day.

The study found no similar association between BMI and premature death.

“What our study shows is that fat really matters, but it depends on where the fat is rather than on the total amount [of a person’s] weight,” said Dr. Francisco Lopez-Jimenez, the study’s lead investigator and director of Mayo’s cardiometabolic program, in a phone interview last week.

“BMI in people with heart disease may not be as relevant,” he added.

BMI is also a poor marker for visceral fat, the kind that surrounds your internal organs (and makes it hard to zip up your jeans). Research has shown that this type of fat is more metabolically active than the fat on, say, your thighs or buttocks, and thus directly affects (and not in a good way) your cholesterol, blood pressure and blood sugar.

As this Mayo study suggests, a better method of determining whether you’re unhealthily overweight is to measure your waist circumference and/or your waist-to-hip ratio.

“I wouldn’t say that BMI should be totally forgotten,” said Lopez-Jimenez, “but there needs to be more attention placed on the distribution of the fat.”

Refuting the obesity paradox
This study, like all studies, has its limitations. It doesn’t prove that excess belly fat causes early death among people with heart disease; it only shows an association between the two. Other unidentified factors may have been responsible for the increased risk.

The study does suggest an explanation, however, for a puzzling phenomenon: the obesity paradox. Many other studies have consistently found that among people with heart disease, “those who weigh the most live the longest, and the skinny ones die younger,” said Lopez-Jimenez.

But those studies used BMI to determine obesity. “Somebody might be skinny, but the distribution of that person’s middle fat might still be dangerous,” said Lopez-Jimenez.

He and his Mayo colleagues recommend in the study that physicians provide weight-loss counseling to heart-disease patients who have a normal BMI but a large waist circumference or a high waist-to-hip ratio.

So, get out those tape measures.