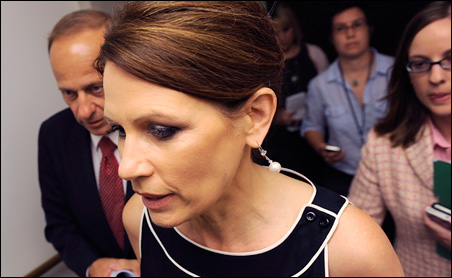 Rep. Michele Bachmann acknowledged earlier this week that she suffers from chronic migraine headaches, but said they would not interfere with her ability to serve as president should she be elected.

“Like nearly 30 million other Americans, I experience migraines that are easily controlled with medication,” she said in a statement released Tuesday. “… I have prescription medication that I take whenever symptoms arise and they keep the migraines under control. Let me be abundantly clear — my ability to function effectively has never been impeded by migraines and will not affect my ability to serve as Commander in Chief.”

Bachmann’s migraines jumped into the news on Monday night, when The Daily Caller, a conservative online publication, released an article in which unnamed advisers said that the congresswoman experiences an average of one debilitating migraine a week. They also said she has been hospitalized at least three times for the condition.

On Wednesday, another online publication, Politico, said it had confirmed several of the incapacitating migraine incidents reported in the Daily Caller, including three in 2010 that caused Bachmann to either miss House votes and/or seek urgent medical care.

Also on Wednesday, Dr. Lucas Bachmann, the congresswoman’s son and a medical resident at the University of Connecticut, told the New York Times that his mother has been having migraines for about 15 years and has sought emergency medical treatment in urgent-care centers at least twice while traveling. He also said she takes three drugs for the condition — two when symptoms occur (to reduce pressure in the brain and to reduce nausea) and one as a prophylactic.

“She would not in any respect meet the definition for not having capacity in one of these episodes,” he told the Times. “She is probably not going to run a mile, but in terms of being able to engage, she can comprehend and assess information — without a doubt.”

Meanwhile, Bachmann released a doctor’s letter about her migraines.

A common condition
Just how incapacitating are migraines? And can they be controlled with treatment? I posed those and other questions about migraines to Dr. Miles Belgrade, a neurologist and medical director of the Fairview Pain Management Center in Minneapolis. 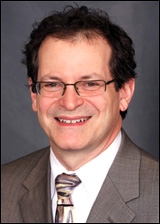 Migraines — intensely throbbing and pulsing headaches that are often accompanied by nausea, vomiting or extreme sensitivity to light, sound and touch — are very common, he told me. About 10 percent of men and about 20 percent of women have them.

“We used to think it was a blood-vessel problem, but now we know it’s a disorder of the nervous system,” Belgrade said. Just what causes a migraine headache is not well understood, but scientists do know that these headaches start with an alteration in the central nervous system that then sets off a cascade of other neurological events, including the release of inflammatory chemicals in the brain.

“Those chemicals sensitize the nerves so they respond to less and less of a stimulus,” explained Belgrade. “That’s why everything seems stronger: Sound seems louder, light seems brighter and touch feels more intense.”

People with migraines often report that their blood pulses with more force during the headache, but actually, said Belgrade, they are just feeling the normal pulsing of blood vessels. “It just seems more intense because everything is set at a more intense level,” he said.

Many triggers
Migraines can come on for seemingly no reason at all, but they can also be triggered by environmental factors, including stress, physical exertion, changes in sleep patterns, and certain foods, especially red wine, cheeses and other foods containing a natural chemical called tyramine.

Fluctuating hormones, particularly in women, have also been identified as a possible migraine trigger. And, indeed, about one third of women lose their migraines after menopause, said Belgrade. But another third, he quickly added, report that their headaches worsen after they stop menstruating.

Those statistics haven’t stopped some women from undergoing hysterectomies to get rid of their migraines. “But it doesn’t always work,” said Belgrade.

And what about high-heel shoes, which Bachmann blames for her migraines, according to the anonymous sources in the Daily Caller article? That idea is not as far-fetched as it sound, said Belgrade. Muscular factors can play a role in headaches, he explained, and therefore “anything that affects muscle balance could affect migraines. So if you’re wearing high heels, that factor might affect the muscles of your back … and that might influence head and neck pain.”

From bothersome to devastating
“Migraines can be very disabling,” said Belgrade. “They’re painful. Sometimes people just have to hole up, pull the shades, turn off the lights, and let the worst pass.”

But the level of migraine-associated pain — and disability — varies from person to person. “[Migraines] run the entire gamut,” said Belgrade, “from hardly bothersome at all to completely devastating, where you have people who are basically nonfunctioning. But that end of the spectrum is very rare.”

Treatments can help, most notably drugs known as triptans. “They help modulate a chemical called serotonin in the central nervous system,” said Belgrade, “and prevent or abort that cascade of events that takes place — as long as you catch it early enough.”

Botox — the muscle relaxer used to smooth out forehead wrinkles — is also being successfully used to treat migraines. There are nondrug treatments as well, including biofeedback and acupuncture.

But not everybody responds to these treatments. “There are plenty of cases of intractable migraine,” said Belgrade.

A problem for a president?
So, could chronic migraines keep someone in a high-powered position from successfully fulfilling their job responsibilities?

“I think it might for some,” said Belgrade, “but for many people with migraine, [the condition] is manageable and doesn’t stop them from doing their job, even it’s a high-performance-type job.”

As for whether someone with chronic migraines could be president, Belgrade believes it’s likely that that’s already happened. “If we have 42 presidents, probably more than 10 percent of them had migraines,” he said, “because migrainers are often hard-driven people.”

“It’s just that common,” he added.