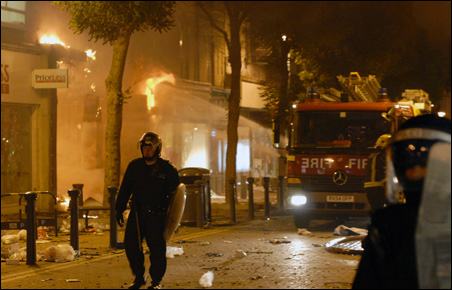 REUTERS/Jon Boyle
A police officer stands guard as firefighters work to extinguish the flames of a blazing store in Woolwich, southeast London, on Aug. 9.

Trying to find a reason for last week’s rioting in England continues to monopolize the British public, press and political establishment.

What has been particularly perplexing to many Brits is the fact that, as the Daily Mail reported, “While the trouble has been largely blamed on feral teenagers, many of those paraded before the courts yesterday led apparently respectable lives.”

In a speech Monday, Prime Minister David Cameron blamed last week’s rioting in England on “the slow-motion moral collapse” that he said has been infecting Britain for several generations.

And Labor leader Ed Milliband has called for a commission to “investigate why people looted and vandalized their own neighborhoods and why they felt no loyalty to their own communities, and what had led to the ‘greed, selfishness, immorality’ demonstrated last week,” reports the Guardian newspaper.

A long-debunked myth
There’s been a lot of discussion about how many of the thousands of individuals who participated in last week’s deadly destruction and looting were apparently pulled into their anti-social acts by “a violent few.”

But as articles in Scientific American and on the blog MindHacks point out, this view of mob mentality is a myth that was debunked 30 years ago.

“[T]he old ideas about the ‘mob mentality,’ deindividuation and the loss of individual responsibility are still popular, but completely unsupported by what we know about how crowds react,” writes psychologist Vaughan Bell in his MindHacks post. “People don’t become irrational and they do keep thinking for themselves, but that doesn’t mean that the influence of the crowd has no effect.”

Or, as psychologist (speciality: group behavior) Stephen Reicher of the University of Saint Andrews in Scotland told Scientific American reporter Lauren Friedman: “When people form a psychological group, what happens isn’t that they lose a sense of identity but that they think of themselves in terms of group membership.”

‘Us Against Them’
MindHacks’ Bell provides a great analogy to explain how this new group identify (and the riotous mob) forms:

Imagine you’ve just got on a bus. It’s full of people and you have to jam into an uncomfortable seat at the back. There are people going to work, some vacant students heading home after a night on the beers, some annoying teenagers playing dance music through their tinny mobile phone speakers and some old folks heading off to buy their groceries.

You’re late and you missed your train. You feel nothing in common with anyone on the bus and, to be honest, those teenagers are really pissing you off.

Suddenly, two of the windows smash and you realize that a group of people are attacking the bus and trying to steal bags through the broken windows.

Equally as quickly, you begin to feel like one of a group. A make-shift social identity is formed (‘the passengers’) and you all begin to work together to fend off the thieves and keep each other safe.

You didn’t lose your identity, you gained a new one in reaction to a threat.

If the police wade in with batons indiscriminately, lots of these riot wannabes suddenly start to feel like they’re part of the bigger group and feel justified in ripping the place apart, mostly to throw at the coppers.

Suddenly, it’s ‘them’ against ‘us’ and a small policing problem just got much, much bigger — like attacking a beehive because you just got stung.

The importance of early intervention
“Crowd events tend to be mixed events with some people who do intend to be violent and some who don’t,” Reicher told Scientific American. “The response of authorities is to see the group as a whole as dangerous. At that point, precisely those people not originally violent have the experience of being treated with hostility and often physical force. Under those circumstances, they see the police as illegitimate and violence escalates.”

“Reicher suggests,” writes Friedman, “ … that the key to preventing riots may be for authorities to regularly engage community members who will publicly oppose violence and looting, shifting the perception of group’s needs and desires in advance. This early intervention — similar to approaches used to combat gang violence — could intercept the possibility of a violent group identity before it can begin to form.”

“You can only take part in these events to the extent that you believe you have collective support from others,” Reicher said. “Nobody riots on their own.”