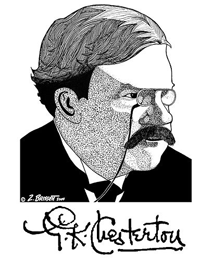 CC/Flickr/In Toon With the World
Early 20th-century author G. K. Chesterton often forgot to get off the train at his intended stop.

G. K. Chesterton, the early 20th-century author of the meticulously plotted Father Brown detective stories as well as thousands of other intricately researched and composed works, including essays, newspaper articles, short stories, plays and poems, was notorious for forgetting where he was, or why. Once, at a London train station, he approached the ticket window and asked for a cup of coffee. Realizing his error, Chesterton made the proper transaction, then proceeded to the station’s restaurant, where he attempted to buy a train ticket.

So lost in thought did the English writer habitually become while traveling, his wife reported, that he often forgot to get off the train at his intended stop. At other times, Chesterton blanked on his destination altogether. He would then sheepishly have to call or telegraph home: “I’m at such-and-such a place,” he would announce. “Where ought I to be?”

Similar lapses of attention — “action slips” in psychological parlance — happen to all of us from time to time. You head out to the mall in your car, and suddenly realize you’re unconsciously driving to work instead. Or you munch your way through an entire box of Girl Scout cookies without remembering anything after the second Thin Mint.

Or you stride purposefully into a room, and then wonder why you’re there.

That “common and annoying experience of arriving somewhere only to realize you’ve forgotten what you went there to do,” writes University of Washington (St. Louis) psychologist Jeffrey Zacks and graduate student Charles Brenner in Scientific American Mind, is usually attributed to a lack of attention or the unimportance of the task that sent us into the other room.

According to these theories, the forgetfulness is due to our not spending long enough encoding in our memory the intended purpose for going to the room.

But new experiments from a team of researchers at the University of Notre Dame now suggest a completely different reason — something called “the doorway effect.” It appears that the act of going through a door — the change in the scene — may be behind the forgetfulness.

Here’s the description by Zacks and Brenner of the experiments that gave rise to this new idea:

Gabriel Radvansky, Sabine Krawietz and Andrea Tamplin seated participants in front of a computer screen running a video game in which they could move around using the arrow keys. In the game, they would walk up to a table with a colored geometric solid sitting on it. Their task was to pick up the object and take it to another table, where they would put the object down and pick up a new one. Whichever object they were currently carrying was invisible to them, as if it were in a virtual backpack.

Sometimes, to get to the next object the participant simply walked across the room. Other times, they had to walk the same distance, but through a door into a new room. From time to time, the researchers gave them a pop quiz, asking which object was currently in their backpack. The quiz was timed so that when they walked through a doorway, they were tested right afterwards. As the title said, walking through doorways caused forgetting: Their responses were both slower and less accurate when they’d walked through a doorway into a new room than when they’d walked the same distance within the same room.

The researchers next tested the experiment in a real-world environment, with participants carrying objects in shoeboxes across rooms and through doorways. The results were similar.

In a third experiment, participants were brought back through a doorway to the original room where they picked up the object to see if it was easier to remember the object in the place where it was first encountered (a test of the encoding specificity principle). It wasn’t.

“The doorway effect suggests that there’s more to the remembering than just what you paid attention to, when it happened, and how hard you tried,” write Zacks and Brenner. “Instead, some forms of memory seem to be optimized to keep information ready-to-hand until its shelf life expires, and then purge that information in favor of new stuff.”

“Why would we have a memory system set up to forget things as soon as we finish one thing and move on to another?” Zacks and Brenner ask. “Because we can’t keep everything ready-to-hand, and most of the time the system functions beautifully. It’s the failures of the system — and data from the lab — that give us a completely new idea of how the system works.”

You can read their article on this research on the Scientific American website.

And later today (or whenever) you find yourself in your kitchen or basement or spare bedroom, feeling like an idiot because you can’t recall why you brought yourself there, be easy on yourself. Remember (if you can): Your brain is just purging itself, making room for your next great idea.

The ‘doorway effect’: A new theory about an old memory complaint