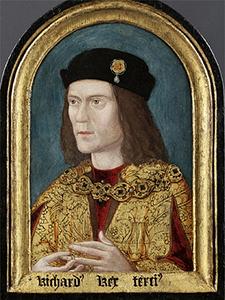 Earlier this year, British forensic scientists announced that their analysis of the 500-year-old skeletal remains of King Richard III, excavated from under a parking lot in 2012, revealed that the British monarch did not have a hunched back, as many history books have claimed. Instead, Richard had a sideways curvature of the spine (sclerosis), which would have left him with only a slight physical disfigurement.

In other words, he wasn’t shaped, as Shakespeare so maliciously put it, like “a bunched-back toad.”

Those forensic experts are back this week with the results of more Richard-related scientific sleuthing. This time they focused on how the king met his death at the Battle of Bosworth Field in 1485, the bloody encounter that ended the long-running War of the Roses and let Henry Tudor assume the throne as Henry VII.

Their findings, published Wednesday in the Lancet, are a fascinating example of how science not only helps us shape our future, but also better understand our past — including our misconceptions of the past.

On the aspect of Richard’s life investigated in this new study — his brutal death — the historical accounts appear to be somewhat accurate, however.  Richard most likely was off his horse when he died, as contemporaneous chroniclers suggested. (They claimed his horse got stuck in the marshy ground of the battlefield when he was just yards from reaching Henry.) It also appears that Richard was struck, as reported at the time, with a halberd — a long metal pole with an axe and hook that was used to pull riders off their mounts.

That blow may have been the one that killed him — or not. Using a fascinating array of forensic tools, including high-resolution computed tomography (CT) scans, previous collected data on skeletal remains from other medieval battlefields and the results of a study of sword marks made on cow bones, the scientists determined that Richard had sustained at least 11 separate injuries by halberd, dagger and sword at or near the time of his death. Nine of them were to his skull.

Here, in the researchers’ own words, are the study’s other findings:

Of course, Richard may also have sustained injuries — including a fatal one — that did not pierce his bones. The evidence also suggests, say the study’s authors, that some of the injuries, including several slighter wounds to the face, were inflicted after Richard was dead — perhaps as his body was slung over a horse and taken off the battlefield.

“The fact that the face is not more completely destroyed might relate to the need to display Richard’s corpse after the battle, which was done to reduce the chances of future pretenders claiming the throne in Richard’s name,” the scientists write.

You’ll find the study on the Lancet’s website. It’s accompanied by a short video that reconstructs Richard’s last moments, blow by blow.