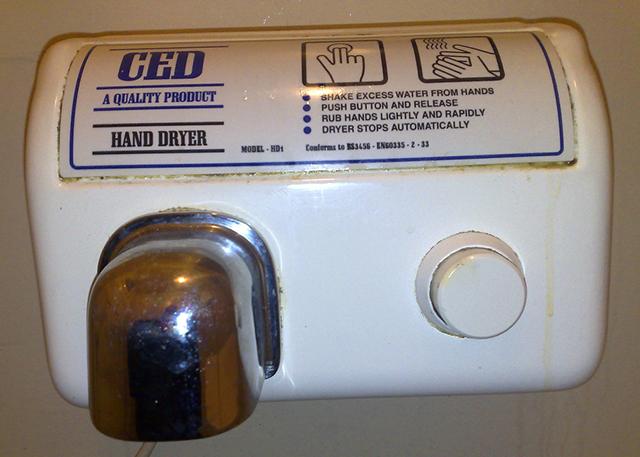 Creative Commons/Mark Hillary
The jet air-dryers spewed out bacteria counts that were 27 times higher than when people dried their hands using paper towels, according to the study.

Public restrooms are places that often elicit an “eww” response. That ickiness factor got magnified last week, however, when British researchers at the University of Leeds reported that electric hand dryers — one of the most ubiquitous features of modern public restrooms — spread bacteria.

Specifically, the study, which was published online in the Journal of Hospital Infection, reported that airborne bacteria counts were 4½ times higher near high-powered jet air-dryers than around less-forceful warm-air dryers.

Furthermore, the jet air-dryers spewed out bacteria counts that were 27 times higher than when people dried their hands using paper towels, according to the study.

This finding seemed to back up a 2012 Australian study, which had also set out to determine which hand-drying method was most hygienic. After reviewing 12 previous studies on the topic, the authors of that paper (published in the journal Mayo Clinic Proceedings) concluded that paper towels 1) dry hands efficiently, 2) remove bacteria effectively and 3) cause less contamination in washrooms. They thus declared paper towels more hygienic than electric air dryers and recommended their use in all hospital settings.

So, does this latest study settle the issue? Can we all finally agree with the Washington Post headline, which declared two years ago — after the Australian paper was published — that “The Paper Towel-Hand Dryer Wars Are Over”?

Well, maybe. But then again, maybe not. For, as the anonymous surgeon who blogs as “Skeptical Scalpel” points out, this latest study contains some major flaws. And there’s an irksome problem with the earlier Australian review paper, too.

Here’s “Skeptical Scalpel” on the main problems with the latest study:

From the paper’s Methods section: “For each test, gloved hands [not bare hands] were first coated by immersion in a suspension of lactobacilli (107 cfu/mL) that were cultured from a proprietary yoghurt.” FYI, 107 cfu/mL is a lot of bacteria — certainly more than most of us would get on our hands during an average trip to the restroom. It’s the equivalent of putting your hands in liquid feces, except that lactobacilli are benign bugs.

Also from the Methods section: “For [another] test, gloved hands were coated in a solution of black water-based paint.” Water-based paint on gloves is not the same as water on bare hands. Have you ever seen water all over the walls next to a warm air dryer? I haven’t.

And then, notes “Skeptical Scalpel,” there’s the study’s big, glaring conflict of interest:

The study was funded by the European Tissue Symposium (ETS). Although this sounds like some kind of scientific conference, it is actually a trade organization of companies that make paper towels. The senior author of the study, Dr. M.H. Wilcox, “has received honoraria from ETS for microbiological advice and travel expenses to attend an ETS meeting.” He also co-authored a consensus statement sponsored by the ETS which happened to find that paper towels are the most hygienic way to dry hands.

And that brings us back to the earlier Australian review paper. One of its authors had also been a consultant to a paper-towel manufacturer.

It could very well be that paper towels are more hygienic than electric air dryers. Indeed, “Skeptical Surgeon” says he prefers them in the hospital setting because he has found they dry hands more thoroughly and more quickly — and drying hands completely is key to reducing the skin’s bacterial content.

Still, he adds, “I don’t believe a word of the much-tweeted European Tissue Symposium study.”

You’ll find the abstract of the study on the Journal of Hospital Infection website.