World War I (1914-1918) occurred at a key transition period in the history of medicine, a time when there was a gap “between knowledge and effective action,” according to a paper published last week in the journal Lancet.

Although many physicians at the start of the war still clung to the old idea that infectious diseases were caused by “bad” air and unpleasant smells (miasma), a growing number — including William Gorgas, who served as surgeon general of the U.S. Army Surgeon General during the war — had come to accept that microorganisms were really the source of such illnesses, writes Dr. G. Dennis Shanks, an infectious-disease epidemiologist at the Australian Army Malaria Institute.

Yet although Gorgas and others knew, at least rudimentarily, what caused diseases like typhoid, tetanus and tuberculosis, their understanding was of limited use, Shanks points out. Antibiotics had not yet been developed, and vaccines were mostly crudely brewed mixtures of killed bacteria. As a result, military doctors had few effective tools on hand to fight any kind of infection.

“Controlled clinical trials had yet to be devised,” says Shanks. “Treatment was by trial and error or dictated by authority.”

Still, he adds, “medical science was progressing, and got drawn into the maelstrom of World War I. Medical laboratories … were deployed with the armies. Top research physicians joined the war as uniformed specialist consultants. … New drugs and vaccines were tried in abundance and reported with remarkable rapidity in medical journals. Some of the interventions worked and became part of the medical armamentarium; others did not and were eventually superseded.” 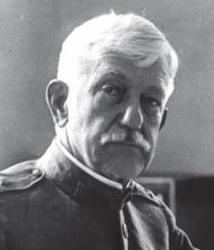 In the Lancet article, Shanks focuses on six infectious diseases that were of particular concern to military medical clinicians during World War I and how attitudes toward those diseases were evolving at that time:

Continual progress is not guaranteed

Over the past 100 years we have, of course, greatly improved our knowledge — and treatment — of infectious diseases. Writes Shanks (with British spellings):

Typhoid is now a disease associated with poor sanitation that mainly occurs in developing countries and rarely occurs in Europe or the USA. Tetanus toxoid immunizations have eliminated tetanus from places with even a rudimentary health system. Malaria elimination is back on the international health agenda, but whether the drugs and insecticides developed since World War I will be adequate to the task remains to be established. Much of the current epidemic of tuberculosis is driven by immuno-compromised people with HIV infection, a virus largely transmitted sexually, that no one had even imagined in 1918. Antibiotics treat most other STIs, despite growing resistance. Although the 2009 influenza pandemic was caused by a virus similar enough to the 1918 causative organism to induce cross-immunity by vaccination, mortality in 2009 was subdued, and people more than 60 years of age were apparently protected by previous exposures.”

But we must not become complacent, he adds:

It would be inaccurate to present this situation as continual progressive improvement. Funding for medical research goes through boom-bust cycles as a result of short political attention spans often focused only in times of armed conflict. Evolution of microbial drug resistance is clearly a growing threat, as the world’s antibiotic inheritance is dissipated by over-use. Untreatable gonorrhoea, tuberculosis, influenza, and perhaps even falciparum malaria are not just potential worst-case scenarios but rapidly evolving clinical problems. What the medical officers of World War I were able to achieve with few resources other than their ability to think should command respect. To avoid experiencing the same helplessness that they felt in 1918 in the face of untreatable infectious diseases, more attention should be paid to the evolution of drug-resistant organisms and the pressing need to develop new antimicrobial drugs.

Shanks’ article is part of a fascinating series of articles that Lancet published Nov. 8 in a special World War I edition of the journal. You can read the article in full at the journal’s website.