The incidence of thyroid cancer in South Korea has increased 15-fold over the past two decades, making it the most commonly diagnosed cancer in that country, according to a study published Thursday in the New England Journal of Medicine (NEJM).

But, as the study also points out, that extraordinary upsurge is not the result of an increase in the disease. No new infectious agent or toxic environmental chemical is suddenly causing South Koreans to develop thyroid tumors. Instead, the rise in the disease’s diagnosis is due entirely to aggressive screening.

For almost all the newly identified thyroid cancers being found in South Korea are tiny papillary thyroid tumors, which studies have shown are very slow-growing and highly unlikely to go on to cause symptoms, much less death.

In other words, these are tumors that don’t need to be treated, although, as the NEJM authors point out, virtually all the people diagnosed with papillary thyroid tumors in Korea end up having surgery (known as a thyroidectomy) to remove all or part of their thyroid gland.

The harmlessness of these tumors, the authors of the NEJM study point out, is demonstrated by the fact that the rate of death from thyroid cancer in Korea has not budged over the past 20 years.

As Dr. H. Gilbert Welch, a co-author of the study and a professor of medicine at the Dartmouth Institute for Health Policy and Clinical Practice, notes in a commentary published Thursday in the New York Times, “If the screening were saving lives, the death rate would decline, or increase more slowly as the epidemic spread — but not stay perfectly flat.”

This trend toward overdiagnosing — and overtreating — thyroid cancer is not without substantial and potentially serious consequences. People who have had a thyroidectomy must take thyroid replacement therapy for the rest of their lives, a treatment that can cause fluctuations in energy and weight, as well as other unwanted side effects, says Welch. 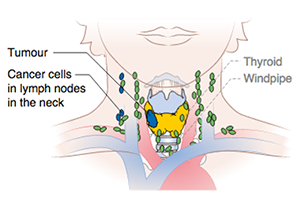 In addition, the surgery itself can lead to complications, including a lifelong calcium-metabolism condition and vocal cord paralysis. In rare cases (two of every 1,000 operations), the patient dies.

Increasingly, patients with papillary thyroid tumors are being prescribed radioactive iodine treatments. But those treatments are also associated with significant adverse effects, including a reduced quality of life and a risk of developing other types of cancer, including leukemia and cancer of the salivary gland.

“The experience with thyroid cancer screening in South Korea should serve as a cautionary tale for the rest of the world,” write Welch and his study co-authors. “During the past two decades, multiple countries have had a substantial increase in thyroid-cancer incidence without a concomitant increase in mortality.”

One of those countries is the United States. The incidence of diagnosed cases of thyroid cancer has tripled in the United States during the past three decades, rising from 3.6 cases per 100,000 people in 1973 to 11.6 cases in 2009. Almost all of those cases — more than 90 percent — involve small papillary tumors.

The number of thyroidectomies being done in the U.S. has also climbed dramatically — by 60 percent between 1996 and 2006.

“To reverse this trend, we need to actively discourage early thyroid cancer detection,” says Welch in his New York Times commentary. But that effort will require both the American public — and the medical community — to take a more rational approach to preventive cancer screening. Writes Welch:

The virtue of early detection is so ingrained and so appealing that many assume that screening can only be good for you. But that’s not true. The Korean experience illustrates the downside of trying to find cancer early: overdiagnosis and overtreatment. The problem is greatest for thyroid and prostate cancer, but also exists for cancers of the lung, breast, skin and kidney. And then there is all the angst surrounding screening — that can’t be good for anyone’s health.

Of course, screening makes sense in some situations: in particular for people who are at a genuinely high risk for the cancer — those with multiple cancer deaths in their family history. People at average risk who expect to live long enough to experience the potential benefit in the future — and who are willing to accept the chance of harm from unneeded treatment now — may also decide that the screening makes sense for them.

Nevertheless, those interested in early detection may want to concern themselves with the question of how early. Sure, we would rather diagnose cancer in a small breast lump than wait until it develops into a large breast mass. But it may be excessive to extrapolate from that to searching for microscopic cancers. Many of the thyroid cancers found in South Korea were less than a centimeter in size. If we look for earlier cancers, we will always find more. And, at some point, we identify too many things that are better off left unfound. In short, having doctors not look too hard for early cancer is in your interest.

You’ll find an abstract of the South Korean study on the NEJM website. Unfortunately, the full study is behind a paywall.

Thyroid cancer in South Korea: a cautionary tale about the dangers of overdiagnosis