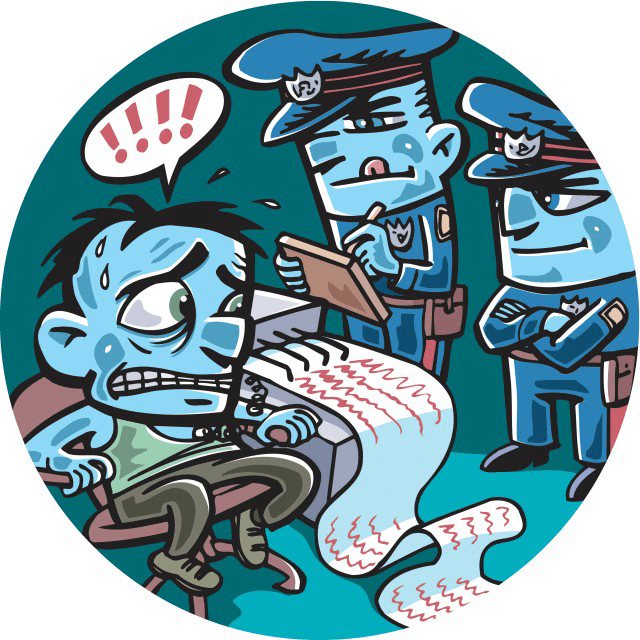 Our legal system is partly based on the assumption that memory is mostly a reliable process.

But, of course, that’s not true. Plenty of good research has shown that eyewitness accounts of crime are very susceptible to after-the-event suggestion and influence, and, thus, highly unreliable. Even more disturbing, however, are the findings that show memory is so malleable that innocent people can be made to falsely believe in — and confess to — crimes they didn’t actually commit.

A new study published last week in the journal Psychological Science offers lab-based evidence for this phenomenon. By providing young adults with vivid and detailed descriptions of events that did not occur in their past, researchers were able to convince a significant majority of them that they had committed a crime when they were a teenager — a crime that was completely made up.

And they were able to do it within only three hours.

“Our findings show that false memories of committing crime with police contact can be surprisingly easy to generate, and can have all the same kinds of complex details as real memories,” said Julia Shaw, a psychologist at the University of Bedfordshire in the United Kingdom and the lead author of the study, in a press release.

For the study, Shaw and her co-author, forensic psychologist Stephen Porter of the University of British Columbia, recruited 60 Canadian undergraduate students who were willing to let the researchers contact their primary caregivers (most were parents). Each caregiver was asked to supply details about at least one highly emotional non-criminal event (such as an accident or an animal attack) experienced by the student between the ages of 11 and 14. (Students with criminal experiences of any kind were not included in the study.)

The careproviders were also told not to discuss the questions or the events with the student until the end of the study.

The researchers then conducted a series of three 40-minute interviews with each student. The interviews took place in an on-campus lab and were spaced about a week apart.

In the first interview, the students were told about an event that had actually happened to them (based on the caregivers’ responses) and about one that they had never experienced. The true event was presented before the false one to maximize the interviewer’s credibility.

Half of the students (randomly selected) were told the false event was a crime that they had committed — either a theft or an assault (with or without a weapon) — and that had resulted in police contact. For the other students, the false event was a traumatic but not a criminal event, such as being attacked by a dog or losing a lot of money and, as a result, getting in significant trouble with their parents.

The researchers made sure the false event contained some true details from the student’s past to give it believability — the name of a friend who had been supposedly present during the event, for example, or the suggestion that the student’s parents had been involved after the event occurred.

The students were then asked to explain what happened during the false event. When they (inevitably) had difficulty doing so, the researcher encouraged them to try harder, and gave them so-called memory strategies, such as guided imagery, which they explained would help them remember more details.

They were also told to practice visualizing the (false) event at home each night. Other research has demonstrated, Shaw and Porter point out in their paper, that these kinds of “imagination exercises” are effective at laying the foundation for the generation of false memories.

During the next two interviews, the students were again encouraged to recall as much as they could about both the true and the false events.

The results were stunning (so stunning that the researchers stopped the study after interviewing 60 rather than the 70 students they had originally thought they would need to test their hypothesis): Of the 30 students who were falsely told they had committed a crime as a teenager, 21 (70 percent) came to believe it, including 11 of the 20 who were told that the crime was an assault.

But those 21 students didn’t simply believe they had committed the crime. By the end of the three interviews, they were also providing elaborate details about the crime — including details of their interactions with police.

A similar finding was observed in the group of 30 students who were falsely told they had experienced a traumatic event as a teenager: 23 (76 percent) of them came to believe that they remembered the fake memory.

This new study therefore has clear implications for legal systems around the world, which rely heavily on memory-related evidence. Write Shaw and Porter:

Our finding that young adults generated rich false memories of committing criminal acts during adolescence supports the notion that false confessions and gross confabulations can take place within interview settings. The Innocence Project has shown that about 25% of false convictions are attributable to faulty confession evidence, which is often obtained via questionable Reid-model interrogation tactics, some of which mirror the false-memory-inducing strategies used in the present study. The kind of research presented here is essential in the quest to help prevent memory-related miscarriages of justice.

Innocent people can be easily convinced they committed a crime, study finds