Heroin use in the United States has climbed dramatically during the past decade, according to a new report from the U.S. Centers for Disease Control and Prevention (CDC).

That increase has occurred across a broad range of demographic groups: men and women, most age groups and all income levels.

In fact, the greatest increases have occurred among groups with historically lower rates of heroin use, such as women and people with high incomes and private insurance.

With the climb in heroin use and addiction has come, not unexpectedly, a rise in heroin-related overdose deaths. More than 8,200 people died in 2013, double the number just two years earlier, in 2011.

“I’ll tell you that as a doctor who started my career taking care of patients with HIV and other complications from injection drugs, it’s heartbreaking to see injection drug use making a comeback in the U.S.,” said Dr. Tom Frieden, director of the CDC, in a phone briefing with reporters on Tuesday.

A dubious — and deadly — lead

Although deaths involving heroin have increased in all regions of the country, the greatest increase has been in the Midwest, which experienced an 11-fold jump in heroin-related overdose deaths between 2000 and 2013, according to an earlier CDC report. 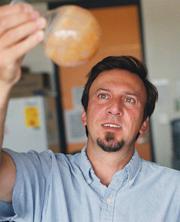 “We’ve overtaken the Northeast,” said Dave Ferguson, a medicinal chemist and professor of graduate studies at the University of Minnesota’s College of Pharmacy, in a phone interview with MinnPost.

Ferguson believes that the recent rise in heroin abuse and overdose deaths — both nationally and in the Midwest — is intertwined with recent efforts to tighten access to prescription opioid painkillers.

Abuse of prescription opioids  — drugs like oxycodone, hydrocodone, fentanyl and morphine — is a huge problem in the United States, claiming more than 16,000 lives from overdoses each year.

But as the U.S. Food and Drug Administration and other government agencies have clamped down on how physicians prescribe these opioid painkillers, many people who have become addicted to them have turned to heroin, which is easier to purchase on the street.

In fact, as the new CDC report points out, one of the strongest risk factors for heroin abuse is the abuse of prescription opioid painkillers. People who are addicted to such painkillers are 40 times more likely to be addicted to heroin as well. 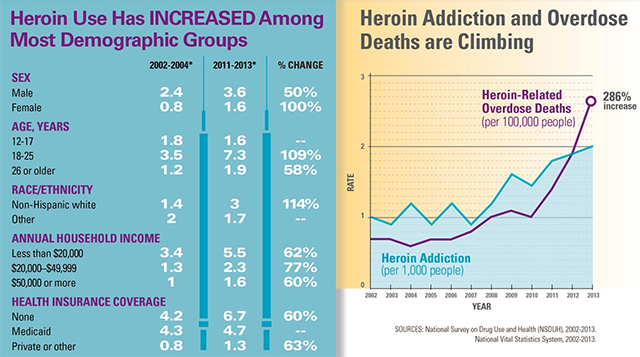 “Once you start putting in safeguards, there’s no doubt that the street drug, heroin, is going to start replacing it,” said Ferguson.

And that’s a very dangerous situation for users.

Most heroin users today have no institutional memory of the catastrophic consequences of abusing that drug, he added. “So you’re going to see people trying and experimenting with it and not really understanding the devastation that it can cause,” he said. “It’s really a perfect storm.”

CDC calls on states to act

The CDC report calls on states to implement strategies to reduce the abuse of opioid painkillers and to improve access and insurance coverage for treatment programs for all forms of drug addiction.

The report also recommends that states expand access and training for the administration of naloxone (Narcan), a drug that can be used in an emergency to revive a person who has overdosed on an opiate, including heroin.

Minnesota passed a law in 2014 that allows police and firefighters to administer naloxone to an overdose patient. The law also grants prosecution immunity to anyone who seeks medical assistance for someone who has overdosed — as well as to the person who receives the naloxone.

Hennepin County, where naloxone use has become more widespread, experienced a decline in opiate-related drug overdose deaths in 2014, according to statistics from the Minnesota Prevention Resource Center (MPRC). Opioid overdoses claimed 102 lives in the county in 2014, down from 132 in 2013. Half (50) of those deaths involved heroin.

It’s not known whether naloxone contributed to that decline, however. 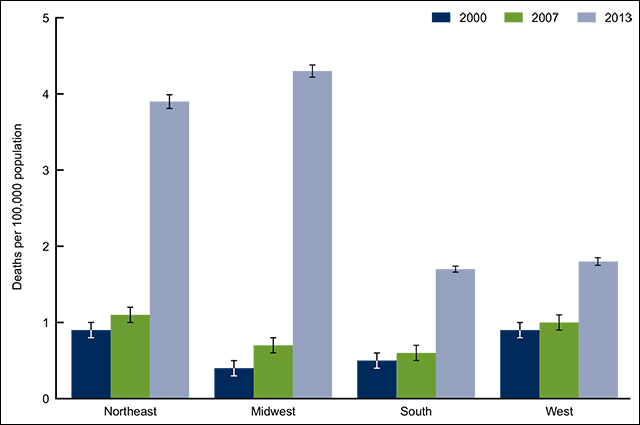 And although the number of opiate-related overdose deaths in 2014 was down from the year before, it was still much higher than the 84 such deaths that occurred in the county in 2012.

The latest CDC report on national trends in heroin use and overdose deaths was published in the July 7 edition of Morbidity and Mortality Weekly Report.

Heroin use is on the rise — especially in the Midwest