A charming essay entitled “The Madness of Charlie Brown” appears this week in the medical journal The Lancet.

Written by British psychiatrist Dr. Athar Yawar, the essay provides gentle and tongue-planted-firmly-in-cheek psychological profiles of the major characters in “Peanuts,” one of the most popular comic strips of all time.

“Sigmund Freud has his promoters, but the best-known psychiatrist of the 20th century was probably Lucy van Pelt,” Yawar writes (with British spellings and punctuation). “From her first clinical session in 1959 (Charlie Brown: ‘I have deep feelings of depression … What can I do about this?’ Lucy: ‘Snap out of it! Five cents, please.’), this little girl ministered to the children of her neighbourhood from a lemonade stand emblazoned with ‘PSYCHIATRIC HELP 5¢. THE DOCTOR IS IN.’”

Yawar’s psychological assessments of the “Peanuts” gang are quite amusing, beginning with this one of Lucy:

Like most psychiatrists — indeed, most people — Lucy is a broken person. Early childhood promise as an athlete disintegrates, as she becomes possibly the worst baseball player ever. She pines for Schroeder, a musician who would not marry her “for all the beagles in Beagleland”, and will kiss her only if “the kiss will be supplied by my representative”. She is ferociously aggressive to Linus, and to anyone who stands in her way; every year, trusted by Charlie Brown to hold a football for him to kick, she pulls it away at the last moment. But she lacks self-doubt: Lucy, in her blinkered determination, is (almost) always right. 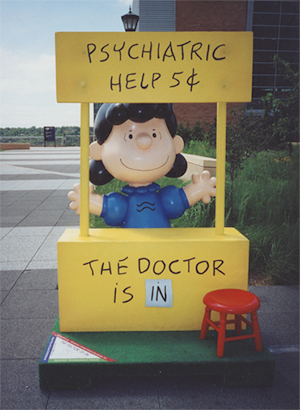 Courtesy of the Minnesota Historical Society
The doctor is in.

And here is Yawar’s assessment of Charlie Brown:

Charlie comes from a loving home, and is decent, considerate, and reflective: but his life is a mess. Despite obvious intelligence, he is a mediocre student. He invests much emotional energy in managing and playing for his baseball team, which habitually loses by ridiculous scores. He yearns for the Little Red-Haired Girl, but never has the courage to approach her; when her family moves away, he stands in the street, paralysed and silent, as his life collapses around him. …

Asked, at around 7 years of age, how long “this period of depression has lasted”, Charlie Brown replies, “Six years!” One summer, he develops a psychosomatic rash and has to spend weeks with his head in a sack. Another time, haunted by the meaninglessness of his losses, he decides to spend the rest of his life lying in a dark room, only to emerge, stooped and shattered, when he realizes he has to feed the dog.

“Charlie Brown often seeks Lucy’s help, but does not seem to get very far,” Yawar notes. “She wants him to feel that he can fit in,” as in this exchange:

Have you ever seen any other worlds?

As far as you know this is the only world there is … right?

You were born to live in this world … right?

“But Charlie Brown is not going to get there,” writes Yawar. “He feels pain and doubt too quickly — through self-pity and vanity, but also through sympathy and a sense of justice. Perhaps, Schulz seems to suggest, it is not Charlie Brown who is mad, but the world.”

You can read Yawar’s delightful essay in full on The Lancet’s website.

Lucy of ‘Peanuts’: the best-known psychiatrist of the 20th century?