On this day — July 14 — in 1518, a woman called Frau Trauffea stepped outside her home in Strausberg, Germany, and began dancing in the street.

She did not dance joyfully, but with a kind of manic frenzy. And, despite the pleadings of her husband and others, she did not stop writhing and leaping until night fell, when she collapsed from exhaustion.

Yet, the next day — and the day after that — Frau Trauffea resumed her dancing, despite the obvious physical pain it was causing her. Finally, at the end of the third day, her body bathed in sweat and her feet soaked in blood, she was bundled into a wagon and taken away to a “healing” religious shrine in the nearby mountains.

But that wasn’t the end of this curious matter. Within a week, dozens of other townspeople had also begun to engage in seemingly uncontrollable dancing, a number that climbed to 400 — and that spread to nearby towns — by the end of August.

Some of those dancers died.

“One chronicle states that [the dancing] claimed, for a brief period at least, about 15 lives a day as men, women, and children danced in the punishing summer heat,” wrote Michigan State University medical historian John Waller in an article published a few years ago in The Lancet.

The dancing mania ended in early September. But, as Waller wrote in his article — and in his book on the topic, “A Time to Dance: A Time to Die” — this wasn’t the first incident of mass compulsive dancing in Europe.

As many as 10 dancing epidemics may have occurred before 1518, including a major one that began on Christmas Eve in 1021 in the German village of Kolbigk and another, even wider-spread one in 1374, which engulfed a string of towns in modern-day Belgium, northeastern France and Luxembourg.

During that particular “dancing plague,” as these episodes have been dubbed, “thousands of people danced in agony for days or weeks, screaming of terrible visions and imploring priests and monks to save their souls,” wrote Waller. 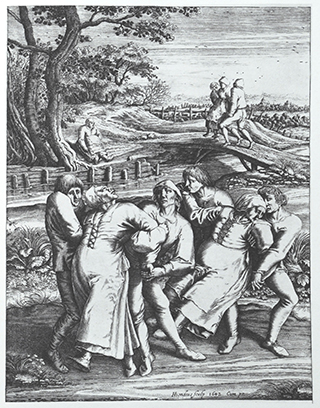 “The Dancing Mania” by Hendrick Hondius after a drawing
by Pieter Brueghel the Elder.

Europe’s dancing plagues ended in the mid-1600s, but speculation on what caused the plagues continues to this day.

As a trio of British scientists pointed out in a 1997 article in the journal Public Health, “Dancing Mania remains one of the unresolved mysteries of public health.”

In medieval Europe, they wrote, many people believed demonic possession was the cause — the result of corrupt priests and improper baptisms. In Italy, however, people tended to attribute the uncontrollable dancing to spider (tarantula) bites, and thus referred to the “illness” as Tarantism.

More recently, historians and others have speculated that the involuntary dancing resulted from ingesting ergot, a mold that grows on rye and related plants. When eaten, ergot can cause LSD-like hallucinations, as well as muscle spasms and tremors.

“Epidemics of ergotism certainly occurred in mediaeval Europe when people ate contaminated flour,” he wrote in his Lancet article. “But this theory does not seem tenable, since it is unlikely that those poisoned by ergot could have danced for days at a time. Nor would so many people have reacted to its psychotropic chemicals in the same way. The ergotism theory also fails to explain why virtually every outbreak occurred somewhere along the Rhine and Moselle Rivers, areas linked by water but with quite different climates and crops.”

Waller believes the cause was more psychological than physical: “an altered state of consciousness” caused by “high levels of psychological distress” and “driven by pious fear.”

He describes how he came to this conclusion in an article he wrote for BBC News:

My explanation rests on the fact that the dancers were in a trance state; otherwise they would have been unable to dance for such lengths of time.

We know that the trance state is more likely to occur in people who under extreme psychological distress, and who believe in the possibility of spirit possession. All of these conditions were satisfied in Strasbourg in 1518.

The city’s poor were suffering from severe famine and disease. And, crucially, we also know they believed in a saint called St. Vitus who had the power to take over their minds and inflict a terrible, compulsive dance.

Once these highly vulnerable people began to anticipate the St. Vitus curse they increased the likelihood that they’d enter the trance state. And once in it, they acted out the part of the accursed: dancing wildly for days at a time. So the epidemic, I argue, was a result of both desperation and pious fear.

“In the long run,” Waller says, “the fervent supernaturalism of the medieval world had to make way for the rise of modern science and rationality. The dancing madness was effectively starved out of existence.”

“Even so,” he adds, “half a millennium later it still serves as a reminder of the ineffable strangeness of the human brain.”

FMI: You can read Waller’s BBC News article and his article in The Lancet online. The 1997 Public Health article is, however, behind a paywall.

The authors of the Public Health article, by the way, point out that a 1960 editorial on this topic in another medical journal “claimed that the Dancing Plague of the middle ages had reemerged in the 20th century in the form of Rock n’ Roll.” I was sure they were bemused by that reference — until they themselves went on to raise the question of whether “recent or current popular crazes such as break dancing, and Raves associated with the drug Ecstasy may be the modern day equivalents” of the dancing plague. Some things never change.