On Sunday, Democratic presidential candidate Hillary Clinton appeared to stumble as she was helped to a car after leaving the Sept. 11 anniversary ceremony in New York City. A few hours later, her campaign announced that she had been diagnosed with pneumonia on Friday, and that the illness, coupled with Sunday’s heat, had caused her to feel lightheaded. She is currently being treated with antibiotics, and her campaign activities have been canceled through Tuesday.

As a pneumonia patient, Clinton certainly has plenty of company. Each year, millions of Americans are diagnosed with the illness. Most are given some kind of antibiotic and sent home to recover, but about 1 million are ill enough each year to require hospital care, according to the Centers for Disease Control and Prevention (CDC). And about 50,000 Americans die each year from the disease.


Pneumonia is therefore both a highly common and potentially serious illness. To learn more about how it is diagnosed, treated and prevented, MinnPost spoke on Monday with Dr. Mark Schleiss, director of pediatric infectious diseases at the University of Minnesota. An edited and condensed version of that conversation follows.

MinnPost: What is pneumonia?

Mark Schleiss: It’s simply an inflammatory condition usually caused by an infection, a pathogenic microorganism in the lower respiratory tract. When we breathe, air passes through our mouth and our windpipe and gets down to the core part of the lungs where there are many, many tiny little air sacs that are in continuous communication with the windpipe. Those are called alveoli. It’s an elegant feature of evolution that there is just one layer of cells separating the alveoli from the [adjacent] capillaries. That’s how oxygen is provided for our blood and bodily functions. That’s the purpose of the lung — to oxygenate the bloodstream. Pneumonia is simply an inflammation in what we as physicians call the air space, those terminal alveoli. It impairs the ability of the lung to function.

MP: There are two basic kinds of pneumonia, bacterial and viral. Can you explain the difference?

MS: I don’t know that I would agree with that statement. It’s really a gross simplification of the truth, which is that there are many different types of pneumonia caused not only by bacteria, but by fungi, parasites, viruses, chemical insults (which we call pneumonia even if it’s not an infection), as well as indeterminate microorganisms that have overlapping features of bacteria and viruses. These are known as mycoplasma.

You may be aware that there is yet another form of pneumonia that is kind of stumping the Minnesota Department of Health at the moment, although I’m sure they’ll solve it. In Hopkins, they’ve had quite a cluster of cases of legionella (Legionnaires’ disease). Legionella is a bacterium that can only infect the human lung if it is hitching a ride in the body of an amoeba. That just shows you how complicated and diverse the microbial world is.

MP: Thanks for clarifying that.

MS: Having said all that, sure, the most common types of pneumonia that take people to the doctor or put them in the hospital are caused by germs, and the most common of them all is a sort of unique [bacterial] organism known as mycoplasma. In fact, when people say they have “walking pneumonia,” what they are probably talking about is mycoplasma. Classically, that’s a nagging and frustrating form of pneumonia. It certainly makes you sick, but it usually doesn’t require hospitalization.

“Walking pneumonia” is not a medical term, of course. It’s a rather antiquated relic of the past that has no particular meaning.

MP: I was reading earlier on the National Institutes of Health’s website that walking pneumonia is more common in the late summer and fall. Have you also noticed that?

MS:  It is true that mycoplasma pneumonia is more common in the late summer and early autumn.

MP: Secretary Clinton apparently had a bad cough for some time before her pneumonia diagnosis — a cough she attributed to allergies. Is it common for people to mistakenly attribute their pneumonia symptoms to something else? And how is the illness diagnosed? What are the symptoms that you most commonly see? 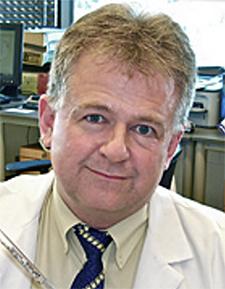 MS: Well, the most common symptom is cough, along with fever and shortness of breath. Those are the classic symptoms of pneumonia. Patients come in with all sorts of ailments. They think they know what’s going on, and it turns out their idea of their problem is different than what I as a physician will diagnosis and identify. And I think that’s OK. Otherwise, why would you even need doctors? If everyone had an app on their smartphone or could go to Google to figure out what’s wrong with them and how to fix it, then there would be no justification for continuing to have physicians. …

So, patients [with pneumonia] will come to us and present with a cough and shortness of breath and often a fever.

MP: How do you diagnosis it?

MS: There are some situations when the diagnosis is going to be based on a bronchoscopy [a procedure that uses a viewing instrument to let doctors look inside the lungs and airways]. There are other situations when the diagnosis will be made purely on a clinical ground, with a [medical] history and physical examination. The approach to the diagnosis of pneumonia really depends on a myriad of circumstances. There’s never really one single approach that is the right thing to do. I will say this: Often, obtaining expectorated sputum for microscopic and culture-based analyses can be very helpful, as can the imaging of the chest using a chest X-ray. Occasionally, blood tests can also be quite revealing.

MP: Pneumonia can have serious complications. Who is most at risk?

MS: Infants in the first few weeks of life are at risk for severe complications and hospitalization. Elderly individuals are also at risk, [especially] elderly, debilitated patients in nursing-home settings who are not ambulatory. Pneumonia is still a common cause of death in the elderly patient in the United States. On a personal note, my dear aunt just passed away a few days ago. She was 97 years old, so she lived a very long life. But at the end of her life she had pneumonia.

But, then, talk to the big, strapping, athletic 26-year-old who gets Legionnaires’ disease. Or talk to the husky lumberjack from Crow Wing County who gets blastomycosis [a fungal form of pneumonia]. They got pretty doggone sick. Young, healthy people in the prime of life can get pneumonia as well.

MS: It’s focused in two general spheres. The first is supportive. That means assuring that the patient can adequately oxygenate their blood. They may require ventilator support or supplemental oxygen. That’s often one of the reasons for hospitalization. The second general [sphere of treatment] is specific anti-microbial intervention — if you can identify the etiology, or the cause [of the pneumonia]. As infectious disease physicians, we believe that if you isolate a pathogenic microorganism from a focus of inflammation, then antibiotics can be very helpful. And I use [the term] antibiotics in the broadest possible sense. For example, the flu is a respiratory tract infection, and the reason we get a flu vaccine every year is to prevent pneumonia. So, in that context, the most commonly prescribed anti-microbial would be an anti-viral drug, like Tamiflu.

MP: Do you recommend rest as well, or does that depend on the patient?

MS: I always recommend rest. But that’s actually sort of interesting, if you want to get scientific for a moment. No blinded, prospective study has ever shown that rest shortens the duration of pneumonia. That’s sort of counterintuitive. Most people would think that if you feel sick, you should rest. But there’s actually no indication that rest is therapeutic. Now, sometimes, if you sit or lie in bed that can be the worst thing you can do, because you can get blood clots. And then you’re in even bigger trouble.

I’ve had patients who have overachiever types of personalities, and, yeah, they may have pneumonia, but they say they don’t have time to take off. They have to keep doing their thing. Now, we do have a professional responsibility as physicians to counsel our patients to avoid interaction that might spread pathogenic microorganisms to other people and put them at risk. But here, too, it kind of depends on the pneumonia. For example, the Legionnaires disease in Hopkins, that’s actually not transferrable to others. It’s transmitted by water droplets. … But, sure, rest. If you need some rest, then rest.

MP: What about getting immunized against pneumonia?

MS: It’s very clear that immunization prevents pneumonia. There are a couple of different options. One, the pneumococcal conjugate vaccine — or PCV13 — is recommended for all adults 65 and older [and children up to age 5]. It’s also recommended for anyone age 6 or older who has risk factors. If you have asthma, if you’re a cigarette smoker, if you have heart or lung disease or other conditions, you should get the vaccine earlier. I think the vaccine is terribly underutilized. It can be lifesaving. [Information on all the various vaccine options for pneumonia can be found on the CDC website.]

And I wouldn’t pigeonhole the flu shot into another category. Influenza causes pneumonia. So in a very tangible and real sense, the influenza vaccine is also a pneumonia vaccine. Everyone should get it every year. Now, there are also other causes of respiratory tract ailments that can cause lung inflammation and infection. One that most people don’t think about is whooping cough. There’s a very safe and effective vaccine that adults should get for that infection as well.

MP: Is there anything about the media’s reportage on Secretary Clinton’s bout with pneumonia that you think might be misleading the public about the illness in general?

MS: I’m old enough to remember when [President] Richard Nixon was out for a week [in 1973] because he had pneumonia. He was actually in the hospital for a couple of days. I was young, but I followed the news, and I remember all the conspiracy theories. Is Liddy behind it? Or maybe it’s John Dean or Ehrlichman or Haldeman. Or maybe it’s the CIA. Conspiracy people are always going to have a field day with this stuff. … I would say, give Mrs. Clinton a break. Pneumonia is the most common thing in the world. She’ll get treated, and she’ll get better and she’ll get on with her life. I don’t know what kind of pneumonia she has, but it’s a very common diagnosis in clinical medicine, and I think her prognosis for recovery is excellent.