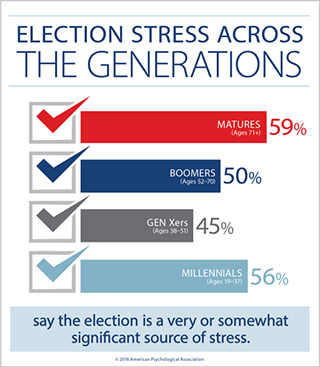 Slightly more than half — 52 percent — of American adults say that the 2016 presidential election is a “very” or “somewhat” significant source of stress in their lives, according to the recently released findings of an online poll commissioned by the American Psychological Association (APA).

The survey, which involved 3,511 people aged 18 and older, was conducted by Harris Poll last August as part of the data-gathering process for the APA’s annual “Stress in America” report. Of course, campaign-related revelations and rhetoric — and charges and countercharges — have only heated up since then, likely adding to people’s stress.

“We’re seeing that it doesn’t matter whether you’re registered as a Democrat or Republican — U.S. adults say they are experiencing significant stress from the current election,” said Lynn Bufka, the APA’s associate executive director for practice research and policy, in a released statement.

Indeed, the survey found that similar percentages within each party  — 55 percent of Democrats and 59 percent of Republicans — said that the 2016 election was stressing them out. A smaller proportion (46 percent) of political independents said the same.

Interestingly — but perhaps not surprisingly — the survey revealed that social media appears to be worsening people’s stress. Almost four in 10 of the survey’s respondents said that social media postings or discussions about the election had caused them stress. In addition, respondents who used social media were more likely than those who didn’t to say their election-related stress was “very” or “somewhat” significant (54 percent vs. 45 percent).

“Election stress becomes exacerbated by arguments, stories, images and video on social media that can heighten concern and frustration, particularly with thousands of comments that can range from factual to hostile or even inflammatory,” said Bufka. 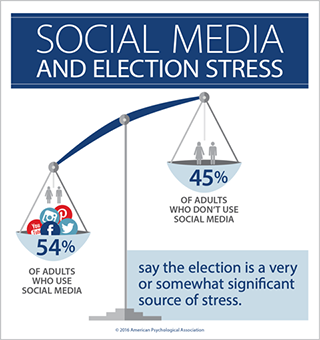 Although the survey found no statistically significant difference between the proportion of men (51 percent) and women (52 percent) reporting election-related stress, it did find major differences among generations.

Such stress is apparently highest in the youngest and oldest age groups. The survey found that the presidential election was either “very” or “somewhat” stressful for 56 percent of millennials (ages 19-37) and 59 percent of “matures” (ages 71-plus). That’s considerable more than the 50 percent of baby boomers (ages 52-70) or the 45 percent of Generation Xers (ages 38 to 51).

All racial and ethnic groups reported significant election-related stress, but Hispanics were most likely to do so (56 percent), followed by whites and Native Americans (52 percent each), then blacks (46 percent) and Asians (43 percent).

In addition, 60 percent of American adults with disabilities reported that the election was a “very” or “somewhat” significant source of stress, compared to 48 percent of those without disabilities.

Here in Minnesota, too

“I certainly see this stress among my clients,” said Robin McLeod, president of the Minnesota Psychological Association, in an interview Monday with MinnPost. “There’s a lot of stress about what the outcome will be.”

McLeod says the media — particularly social media — is “feeding and inflaming” these fears.

“Right now, we have a country that is very polarized politically,” she said, “and to have the media further polarize people is not making things easy.”

What can people who are feeling overly stressed by the election do to reduce their anxiety? 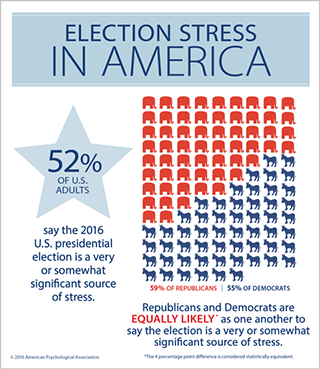 “There’s a deeper level at which everyone really wants what’s best,” McLeod said. “No one wants to hurt other people. So if you can listen below the inflammatory rhetoric and listen to what people are really trying to do — listen to it at that level — maybe then you won’t be so upset.”

“Life goes on, no matter what happens politically,” she added. “If you are really upset, one way of coping with it is to focus on the things that you’re passionate about and that you can have an impact on within your local community.”

The APA offers these tips to people who want to manage their election-related stress:

FMI: The APA’s report on this year’s presidential election stress can be found on the organization’s website. The APA’s full “Stress in America” report will be published early in 2017.