Judge Reinhold as Elaine’s close-talking boyfriend in the “Raincoats” episode of “Seinfeld.”

An episode from the classic ’90s TV sit-com series “Seinfeld” featured a “close talker” — a boyfriend of one of the main characters (Elaine) who didn’t seem to realize he was making people uncomfortable by getting too physically close to them during conversations.

Most of us never encounter such an over-the-top example of a “close talker,” but we can certainly identify with the general situation. For, from time to time, we all find ourselves in conversation with someone who stands just a little bit too close to us for comfort.

It can be an awkward moment.

Yet, what one person thinks is “too close” can seem quite natural to another. That’s because our perception of such situations — the amount of “breathing space” we need between ourselves and another person to feel comfortable — depends on our personality, particularly on our level of social anxiety. It also, of course, depends on our relationship with the other person.

And culture is also believed to play a role. The prevailing belief has been that people living in Southern Europe, Latin America and the Middle East tolerate closer interpersonal distances, while those living in North America, Northern Europe and Asia do not. But this geographic explanation for interpersonal-space preferences has not always been supported by the data. Furthermore, the existing research on this topic has tended to ignore people living throughout most of Africa.

To take a closer — and broader — look at how perceptions of interpersonal space vary around the world — including southern Africa — the authors of a new study recruited 8,943 individuals in 42 countries. They asked them to indicate on an illustrated scale of 0 to 220 centimeters (0 to about 7 feet) the minimum distance they would feel comfortable standing with a stranger, an acquaintance and a close friend or relative while having a conversation.

An analysis of all that data, which was published recently in the Journal of Cross-Cultural Psychology, revealed some interesting — and sometimes surprising — results.

The five countries whose participants felt comfortable with the least amount of social distance between themselves and a stranger during a conversation were (in order) Argentina (about 31 inches), Peru, Bulgaria, Ukraine and Austria. Those whose participants wanted the most amount of distance were (again, in order) Romania (about 55 inches), Hungary, Saudi Arabia, Turkey and Uganda. 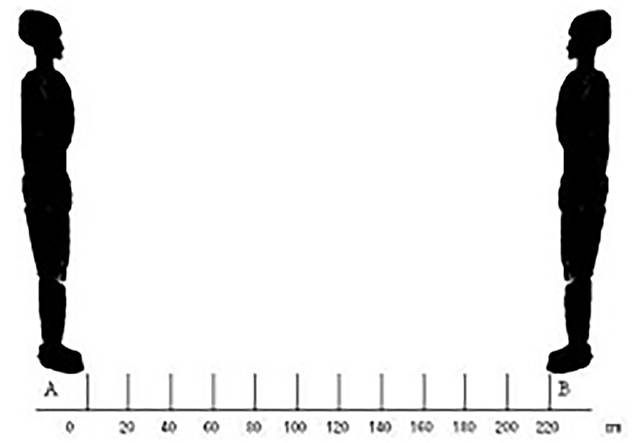 Journal of Cross-Cultural Psychology
Graphic of distance shown to participants.

The United States was ranked 13th in terms of tolerating closeness with strangers. We like, on average, a minimum of about 35 inches between them and us. That makes us a bit more easy-going about our personal space than Germany (14th) and a bit more up tight than Kazakhstan (12th).

The 42 countries lined up in a fairly similar ranking order when it came to preferred distances with an acquaintance, although the minimum distances were smaller (as might be expected). They got smaller yet for the preferred minimum distances during a conversation with a close friend or relative, but here the rankings had some surprises.

Romania — the country whose citizens wanted to stand the farthest away from a stranger — were now among the countries willing to stand the closest. Other countries that significantly shortened their preferred distances when it was with someone they knew well rather than with a stranger were Norway, Iran and the Czech Republic.

The study found that — across all the countries — two strong predictors of preferences for personal and intimate distances in the current study were gender and age. Both women and older people tended to be more comfortable with greater distances.

The study also examined whether climate or vulnerability to parasites might be associated with preferred interpersonal-space differences. They found no link to parasites, but they did find one to average temperature.

“In warmer countries, people preferred to maintain closer distances toward strangers — but farther toward the intimate partners,” the researchers write.

Those results are consistent, they point out, with a 2010 study that found warmer climates induced greater social proximity — an observation that was even true within the United States, where “people in warm latitudes were shown to exhibit a closer contact behavior with more touch than their counterparts in cold climates.”

As for Norway and other cold-climate countries that switched their interpersonal-space preferences to close contact when it was with people they knew well, “it is possible,” write the researchers, “that some negative effects of colder climate can be alleviated through closer intimate distances.”

A couple of caveats

This study, like all studies, has some important limitations. For one thing, people indicated their preferences on paper; they weren’t observed demonstrating those preferences in real-life situations. Also, no gender was given to any of the three hypothetical conversationalists in the experiment — a factor that might have influenced people’s responses.

Still, the findings are intriguing. They’re also something to think about the next time you travel abroad — or find yourself chatting with a “close talker.”

FMI: You’ll find an abstract of the study on the Journal of Cross-Cultural Psychology website, but the full study is behind a paywall.