As in past years, Minnesota has a prominent north-south health divide: Its healthiest counties tend to be in the southern part of the state and its least healthy ones in the northern part.

As for Minnesota’s 10 least-healthiest counties — Mahnomen, Beltrami, Cass, Clearwater, Wadena, Cook, Redwood, Mille Lacs and Itasca — only one, Redwood, is south of the Twin Cites.

The two most populous of Minnesota’s 87 counties, Hennepin and Ramsey, ranked 37th and 68th in this year’s report.

The rankings are based on more than 30 factors that influence health, including smoking, alcohol and drug use, obesity, teen births, high school graduation rates, income inequality, access to health care, and air and water quality.

A focus on inequities

The differences uncovered in the report between the healthiest and least healthy counties in Minnesota are striking. The rate of premature death (deaths that occur before age 75) is 3½ times higher in Mahnomen County than in Carver County, for example. In addition, people living in Mahnomen County are more than twice as likely to report being in poor or fair health than their counterparts in Carver County.

This year, the “County Health Rankings” took a particularly close look at racial and ethnic inequities in health outcomes. “There are differences by race/ethnicity in length and quality of life that are masked when we only look at differences by place,” the authors of the report note.

Again, the differences are dramatic. In Minnesota, the premature death rate for American Indians is more than three times higher — and that for blacks is about twice as high — as the rate for whites, Hispanics and people with an Asian/Pacific Islander background. 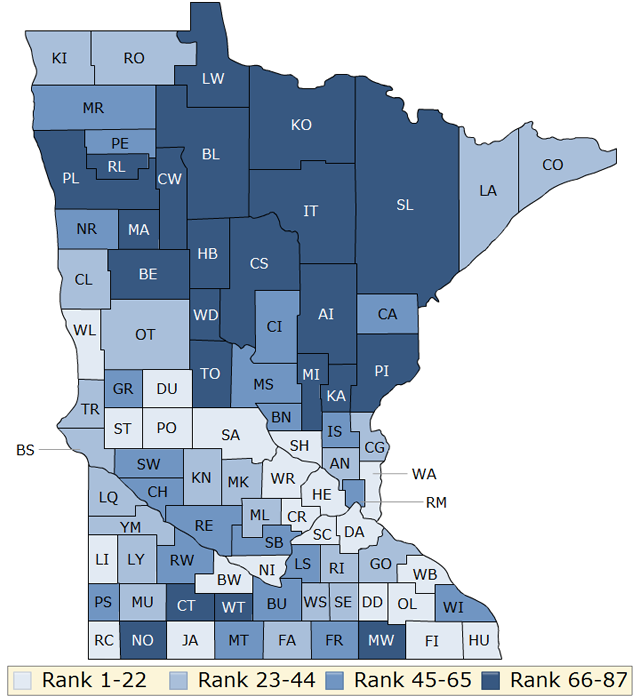 The report also highlights several of the racial/ethnic disparities associated with key socioeconomic drivers of health, such as poverty and access to health insurance. Here are a few of the findings for Minnesota:

“We can’t be a healthy, thriving nation if we continue to have entire communities and populations behind,” said Dr. Richard Beser, president and CEO of the Robert Woods Johnson Foundation, in a released statement. “Every community should use their County Health Rankings data, work together, and find solutions so that all babies, kids, and adults — regardless of their race or ethnicity — have the same opportunities to be healthy.”

FMI: You can explore the scores of each Minnesota county in detail and compare them to other counties in Minnesota at the “County Health Rankings” interactive website.