Menstrual cups — reusable rubber, latex or silicone devices that are inserted into the vagina to catch menstrual blood — offer a safe and effective alternative to pads and tampons, according to a new scientific review of previous research on the devices.

The review, which was published Tuesday in the journal Lancet Public Health, found that menstrual cups result in similar or even lower leakage than pads and tampons and are just as safe. The cups also tend to be more economical and more eco-friendly.

Awareness among women of menstrual cups, however, is low. Even in high-income countries, where women have wide access to information about reproductive health, only between 11 percent and 33 percent of women are aware of the devices, the review reports.

“Despite the fact that 1.9 billion women globally are of menstruating age — spending on average 65 days a year dealing with menstrual blood flow — few good quality studies exist that compare sanitary products,” says Penelope Phillips-Howard, the review’s senior author and a public health epidemiologist at the Liverpool School of Tropical Medicine in the United Kingdom, in a released statement.

“We aimed to address this by summarizing current knowledge about leakage, safety, and acceptability of menstrual cups, comparing them to other products where possible,” she added.

For the review, Phillips-Howard and her colleagues analyzed data collected from 43 medical studies that involved 3,319 women in Europe, Africa and the United States. They also looked at data from “grey literature” — research presented at conferences or as part of a scientific report or academic thesis. 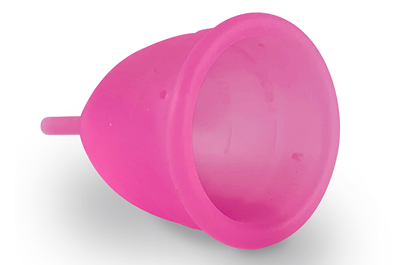 Their analysis of all that data revealed that menstrual cups appear to be widely accepted by women, once they learned how to use them. Almost three-quarters of the women who tested the cups in 13 of the studies said they were willing to continue using them afterward.

One reason for that willingness may have been the effectiveness of the devices. In the four studies that directly compared leakage from menstrual cups with leakage from disposable pads or tampons, the cups were found to be either similarly or more effective.

The review found no evidence that menstrual cups changed the vaginal flora (the bacteria that reside within the vagina). Nor were the devices associated with an increased risk of infection. The review did identify five reported cases of toxic shock syndrome, but because the total number of women who use menstrual cups is unknown, the researchers could not determine how that risk compares with the toxic shock risk associated with tampons.

The evidence was also unclear about whether menstrual cups increase the risk of IUD displacement among women who use that form of birth control. The authors of the review call for more research into the safety of that combination of devices.

A total of 199 brands of menstrual cups were identified by the review. They were found in 99 countries. The cups ranged in price (in U.S. dollars) from 72 cents to $46.72. As the researchers point out, that’s roughly 5 to 7 percent of the cost of using 12 pads or tampons per menstrual period.

A menstrual cup can last up to 10 years, however.

Not unsurprisingly, the cups also produce less waste. Over 10 years, one menstrual cup produces 0.4 percent of the plastic waste created by single-use pads, or 6 percent of that generated by tampons, according to the review’s calculations. The researchers note, however, that those numbers are only estimates and don’t take into account the various products’ production costs.

The researchers also identify in the review a possible explanation for why awareness about menstrual cups is so low. When they looked at 69 websites that offer educational information about puberty to girls — websites run by professional health organizations or government agencies in 27 different countries — they found that less than a third (30 percent) mentioned menstrual cups.  By contrast, more than three-quarters (77 percent) mentioned disposable pads and almost two-thirds (65 percent) mentioned tampons.

“For consumers purchasing menstrual products, the results highlight that menstrual cups are a safe and cost-effective option,” writes Julie Hennegan, a research associate from the Johns Hopkins Bloomberg School of Public Health, in a commentary published alongside the review.

“Crucially,” she adds, the review’s findings “indicate that menstrual education resources are not providing a comprehensive overview of products to support informed choices.”

FMI: The study can be read in full on the Lancet Public Health website. The study was funded by the UK Medical Research Council, the Department for International Development (a U.K. governmental agency responsible for overseas aid) and the Wellcome Trust.