Americans have more confidence in scientists than they did a few years ago, according to a new report by the Pew Research Center.

In 2019, 86 percent of Americans had at least “a fair amount” of confidence that scientists act in the public interest — up three percentage points from the previous year. And within that group, 35 percent express “a great deal” of confidence — a significant jump from the 21 percent who gave that response in 2016.

The report is based on a survey conducted in January of a nationally representative sample of 4,464 adults across the United States.

A matter of trust

The survey asked respondents about their attitudes toward scientists in general, but also about scientists in three fields: medicine, nutrition and environment. Interestingly, practitioners in those specialties tended to be more trusted than researchers working in the same fields:

For example, 47% say dietitians provide fair and accurate information about their recommendations all or most of the time, compared with 24% for nutrition scientists discussing their research. There is a similar gap when it comes to information from medical doctors and medical research scientists (48% and 32%, respectively, say they provide fair and accurate information all or most of the time). However, trust in environmental health specialists — practitioners who offer recommendations to organizations and community groups — is about the same as that for environmental research scientists.

Despite expressing overall confidence in scientists, Americans remain highly skeptical about their integrity. Less than one in five of the people surveyed said scientists are transparent most or all of the time about their potential conflicts of interest with industry. 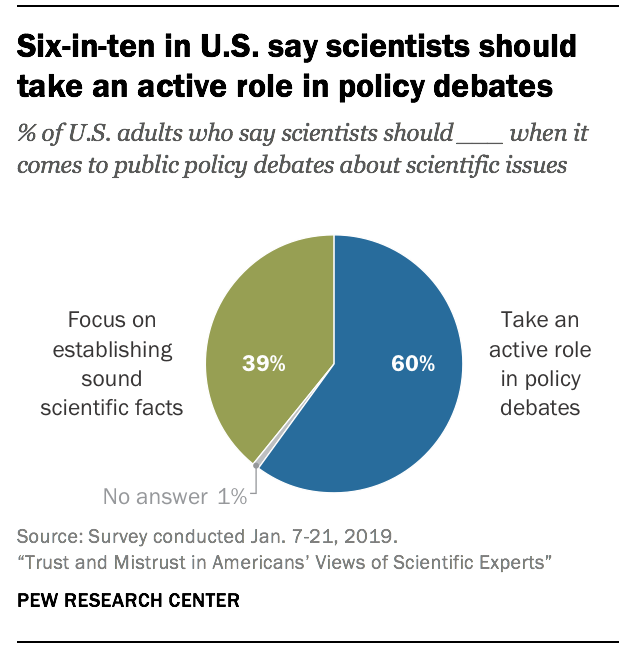 The survey also revealed a significant partisan divide among Americans’ attitudes toward scientists — a divide that has grown in recent years.

The amount of scientific knowledge that people possess affects these attitudes — if they’re Democrats. Among the people in the survey who demonstrated a high level of factual knowledge about science, more than twice as many Democrats as Republicans — 86 percent versus 40 percent — thought scientists should be actively involved in policy debates.

More Democrats than Republicans — 62 percent versus 40 percent — were also more likely to say that the judgments of scientists are based on facts. It is perhaps not unsurprisingly, therefore, that Democrats were also more likely to say they trust the scientific method. Among the survey’s respondents, 70 percent of the Democrats said the scientific method generally produces accurate conclusions, compared to 50 percent of the Republican respondents.

“Knowledge and information can influence beliefs about these matters, but it does so through the lens of partisanship, a tendency known as motivated reasoning,” the report says.

Here are some additional findings from the report:

That last finding “could be related to inequities in health care and outcomes, among other issues faced by black people and other nonwhite Americans in medical treatment and research,” the report notes. “Examples include the “Tuskegee Study of Untreated Syphilis in the Negro Male” and the case of Henrietta Lacks, both of which involved individuals who were subject to research studies without their knowledge or consent.”

FMI: You can read the report online at the Pew Research Center’s website.

Americans’ confidence in scientists rises, but so does partisan divide